MACD settings to make the most of your trades

The MACD is often used with its default setting when entering trades. However, this versatile indicator can be customized to assist traders in exiting trades too. This article takes a brief look at the MACD and the general MACD settings before expanding on how the MACD can be altered to exit trades.

The typical MACD default settings are (12,26, 9) and refers to the following:

Signal line = 9 period EMA of the MACD itself

The histogram provides a visual representation of when the MACD is above (green) or below (red) the signal line. These are the typical settings used by traders when entering the market but what about when it is time to exit the market?

If you are new trading or simply need a refresher, take a look at our in-depth MACD guide.

How to use two MACDs with different settings for better exits

Many traders spend a disproportionate amount of time and effort on the entry into the marketwhile neglecting where they exit. However, when trading, it is the exit that will determine how much you ultimately take from the market or how much of your equity you surrender to the market.

Traders can look for the usual MACD entry triggers but adapt these signals to exits. For example, a zero-line crossover or the tradition signal of the MACD line crossing the signal line can be adopted to exit trades.

The downfall of this approach arises when there are multiple crosses of the MACD and signal line resulting in traders opening and closing trades more frequently than necessary.

Exiting a trade properly is often the toughest part of trading well and the addition of a second MACD can help with that.

The argument for having two MACDs is that you have a sensitive (faster) MACD to get you into a potential trend quickly and a less sensitive (slower) MACD for exits. As mentioned earlier, exiting a trade properly is often the toughest part of trading well and the second MACD can help with that. The second MACD settings are 19,39,9.

The table below summarizes this:

It is clear to see how the two MACDs combine to produce entries and exits in the CAD/CHF chart below. The 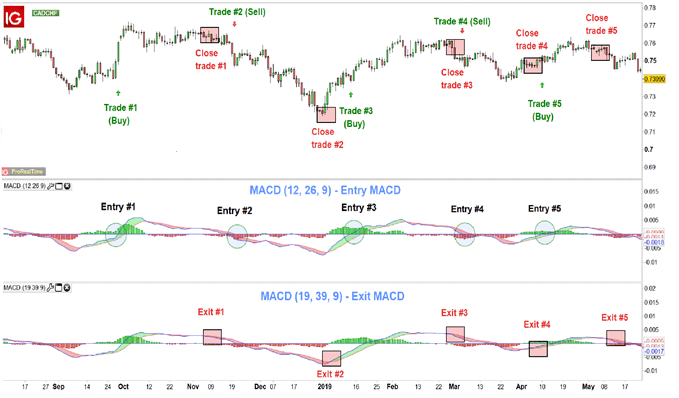 The entry rules are different from the exit rules to keep you trading into the direction trend longer before exiting the trade.

Under which market conditions should traders consider using a slower MACD setting?

Slower MACD settings can be extremely helpful to navigate more volatile currency pairs such as: UZD/ZAR, GBP/AUD, CAD/JPY to name a few. The slower MACD settings applied to any of these markets helps to smooth out the volatility of the market in an attempt to avoid false signals.

Slower MACD settings are particularly useful for GBP crosses as these pairs are naturally more expensive and require larger margin than other pairs when comparing the same number of contracts.