MACD vs Stochastic: Timing Entries with One or Both Indicators

Many traders opt to look at the charts as a simplified way to identify trading opportunities – often using technical indicators to do so. The MACD (moving average convergence/divergence) and stochastic indicators are amongst the most common methods used by traders to identify possible entry and exit signals in certain market conditions.

The aim of this article is to assess how each indicator can be used to identify entry and exit signals in specified conditions and how they might be used together.

MACD vs Stochastic: Is one indicator better than the other?

In the EUR/USD chart below, there is a strong prevailing upward trend which can be seen on the price chart. When using the MACD, the first MACD crossover can be found when the MACD line (the blue line) crosses over and above the signal line (the red line), providing traders with a bullish signal, suggesting that both prices and momentum of the trend are increasing.

At the second MACD crossover, the MACD line crosses below the signal line, providing a bearish signal. Because the crossover is still above the zero line, this suggests that the momentum of the upward trend is slowing down, although the larger trend is still in favor of bulls. In both instances, the MACD crossovers correspond with what took place on the price chart during that specific period, whereas the stochastic indicator provides false signals for the same measured look. 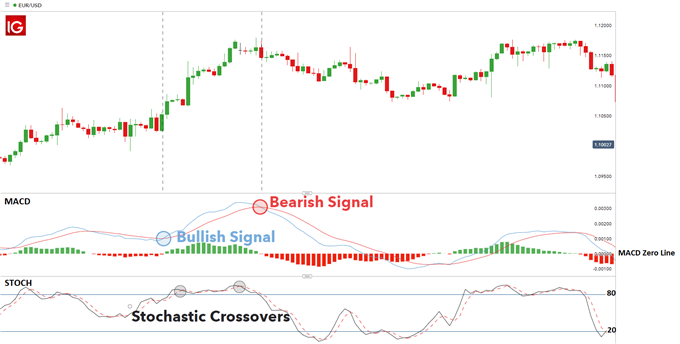 The above example showed a trending market but what happens in ranging markets?

Looking at another example below in which GBP/NZD is range bound (trading sideways). In this instance, the MACD provides less reliable signals than the signals provided by the stochastic.

As indicated below, the first stochastic crossover occurs below 20 and meets the criteria for a bullish signal, which indicates that the GBP/NZD is oversold, and prices may be soon increase. Similarly, the second and third crossover occurs from above 80 where the %K line crosses below the %D line, suggesting that the market is now overbought, and prices may decrease. In this example we see that while the MACD crossovers aren’t necessarily incorrect, the stochastic provides clearer entry and exit signals. 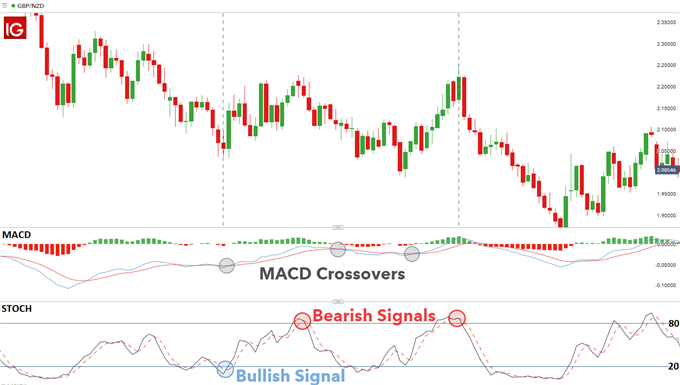 As we have seen above, the MACD is a generally more effective indicator in trending markets while the stochastic often works better in ranging markets.

Next, we will explore how traders can combine the MACD and the stochastic indicators to get more optimal signals.

Want to become a better trader? Let us help you
Becoming a Better Trader in Current Markets
Register for webinar
Join now
Webinar has ended

A double cross strategy with Stochastic and MACD

When applying the stochastic and MACD double-cross strategy, it is important that the criteria for both indicators be taken into consideration when looking for potential signals.

In the US 500 chart below, the stochastic crossover occurs when the %K line crosses over and above the %D line and is below 20. Shortly after, the MACD crossover occurs when the MACD line (the blue line) crosses over and above the signal line (the red line) and is below the zero line. This is a bullish signal in both cases, confirming that an upward trend is forming.

To use this strategy correctly, the stochastic crossover should occur shortly before the MACD crossover as the alternative may create a false indication of the trend. 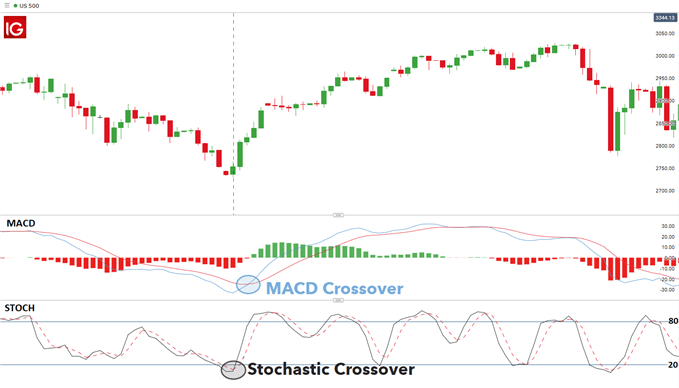 As far as MACD vs Stochastics goes, much will depend on the trader in question and other factors in their approach. Based on the length of time used, comfort level achieved, and prior instances of success (perhaps the strongest reason of all), some will prefer one over the other while other traders will put both to use.

Is there a way to reduce the likelihood of false signals?

What settings should be used for the MACD and the stochastic?

Recommended by Tammy Da Costa
Want to know what can separate winners from losers?
Get My Guide