How to Enter Trades using a MACD Crossover

Many traders look for opportunities to trade during volatile market conditions and while these periods offer great opportunities, the importance of timing cannot be ignored.

The aim of this article is to give traders a better understanding of the MACD crossover and to demonstrate how it can be used in Forex trading.

The MACD Crossover: What is it?

The Moving Average Convergence/Divergence (MACD) is a technical indicator which uses the difference between two exponential moving averages to determine the momentum and the direction of the market. The MACD crossover occurs when the MACD line and the signal line intercept, often indicating a change in the momentum/trend of the market. The MACD is seen as an effective indicator, especially in trending markets.

Components of the MACD:

Using the MACD Crossover in a Forex Trade

1. MACD crossover as an entry trigger

Having a strong entry strategy can increase the probability of success by confirming the direction of the trend before entering a trade.

In the case of the MACD crossover, the most widely used entry signal is when the MACD line crosses over the signal line in the direction of the trend.

A bullish signal is present when the MACD line crosses ABOVE the signal line and is below the zero line. When the crossover takes place, traders may look for confirmation of an upward trend by waiting for the MACD line to cross over the zero line before opening a long position.

2. Using divergence to determine trend with crossover as confirmation

In periods of high volatility, or strong trending markets, divergence can be extremely helpful when looking at the momentum of the trend.

Divergence can be defined as the separation of price action from an indicator. An example of divergence can be seen on the GBP/NZD 2 hour chart below where the market shows a series of new highs on the price chart but the MACD indicator shows lower highs. Divergence is often a symptom of reversal as it suggests that the trend is beginning to lose momentum.

When this occurs, traders may use the next crossover as confirmation of a market correction/reversal before entering a position in the opposite direction. 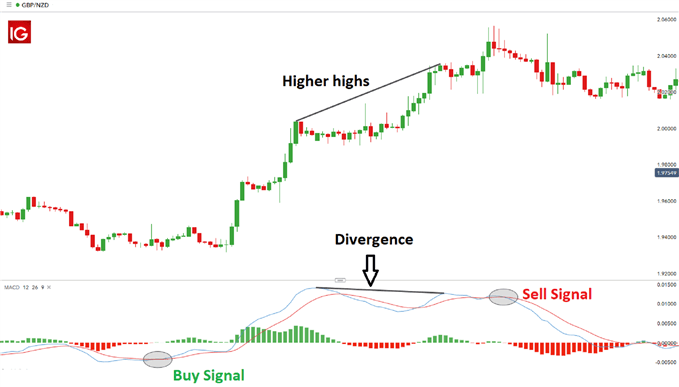 3. Using the MACD crossover to filter signals in direction of trend

Traders who believe that ‘the trend is your friend’ may find the MACD crossover to be a useful tool when looking to filter signals in the direction of trend.

To identify an upward trend, a trader can look at crossovers that occur when the price chart is showing higher highs and higher lows. Another way to identify an upward trend would be to look at the MACD line (the blue line) relative to the zero line. When the MACD line is above the zero line, this means that the trend is up. Traders who follow the trend will only look for buy opportunities when the trend is up. The opposite criteria would apply to traders looking for opportunities to sell.

Recommended by Tammy Da Costa
Eager to trade with confidence? We'll show you how
Get My Guide

Can you anticipate a MACD crossover?

What is the best time frame to use for the MACD crossover?

The MACD crossover can be used on any time frame, however the time frame used will often depend on what type of trader you are. It is often beneficial to make use multiple time frames as this will give you a holistic view of the market. A longer time frame can be used to assess the overall trend while a shorter time frame often speeds up the frequency of signals.