The Elliott Wave analysis for Dow Jones Industrial Average, EURUSD and AUDUSD shows increased probability that a deeper correction may be unfolding from nearby levels.

The video above is a recording of a US Opening Bell webinar from March 5, 2018.

Dow Jones Industrial Average has held below 26,016 since the early February sell off. According to Elliott Wave Theory, this leaves DJIA exposed to a deeper correction down to 20,000. 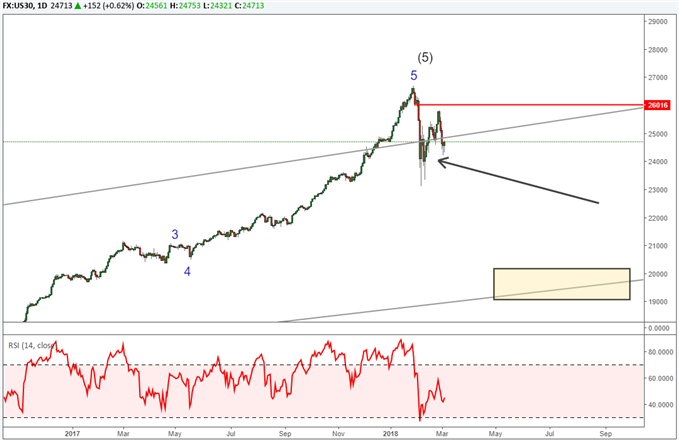 We may see a mild bounce but we anticipate this bounce to be a partial retracement and continue to hold below 26,016. A move above 25,500 will generate some early warning signals that the Elliott Wave labelling on the chart below is off, though the bearish outlook continues so long as we are below 26,016. 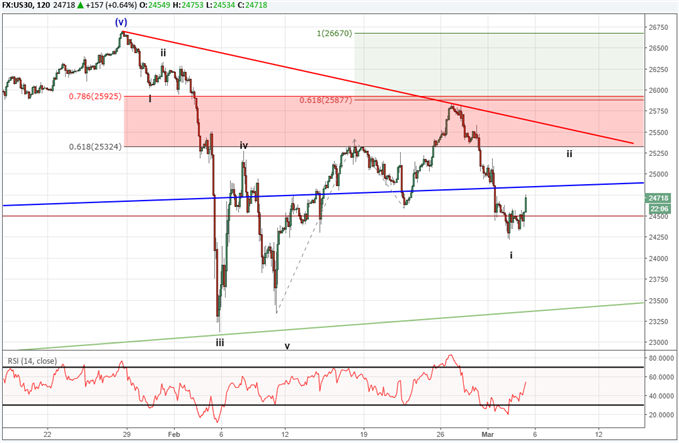 Could a Multi-Month Top be in Place for EURUSD?

We have been suggesting since early January 2018 that a three year expanded flat pattern is ending and that a multi-month high hangs around the corner. After a couple of false starts, we are seeing evidence mount that the high is in place.

First, the high on February 15 occurred just pips within a cluster of price zones where three ending waves meet a 10-year trend line.

Secondly, we can count a clean impulse wave from February 9 to February 15 so the structure has the necessary waves in place to account for a top. The subsequent reversal has morphed into a bearish impulsive wave.

Lastly, EURUSD has broken below the February 9 low of 1.2206. That price break at this point in the Elliott Wave pattern provides a clue that the higher probability pattern is that a multi-month top in EURUSD is in place. 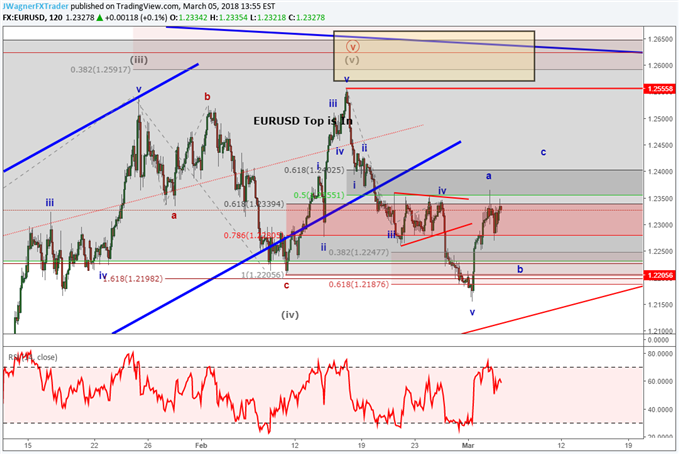 The current live sentiment reading for EURUSD is -1.7.

Our analyst pick for February was to short AUDUSD on a break down as we anticipated a fall below 76 cents. At that time, we were seeing evidence of a bearish impulse wave.

We successfully entered short at .7891 and with the trade comfortably in our favor, we wish to tighten the risk on the trade to just a couple of pips above the February 26 high. Therefore, we are moving our risk and stop loss on the trade to .7895.

If AUDUSD does bounce above the red resistance line currently crossing near .7795, then it will be an early warning signal that more gains may be on the horizon. 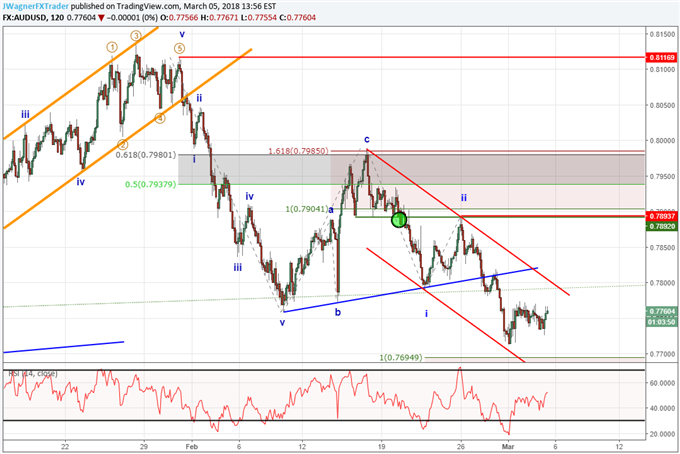 It seems as though Elliott Wave principle is subjective.

So long as the rules of Elliott Wave Theory are not broken, then the analysis is valid. The reason many traders consider Elliott Wave principle to be subjective is a result of forecasting error. Even I make forecasting mistakes and it happens to everyone as we are assessing a live market environment. One key for budding Elliott Wave technicians is to learn the main patterns and then minimize those errors by following the larger trend. We discuss this and other expert tips in our beginners and advanced trading guides.