EUR/USD Elliott Wave analysis shows a three year expanded flat pattern very close to being completed. New highs above 1.26 may be short lived as a large bearish reversal hovers nearby.

EUR/USD has been correcting sideways since March of 2015 as an A-B-C wave. This three-wave move is shaped as an expanded flat pattern.

According to the Elliott Wave principle, the ‘C’ wave of the flat would need to carve in five waves and it is the terminal wave of the larger pattern. We can see from the chart below that the pattern is nearly complete as the fifth and final wave is advanced in length. 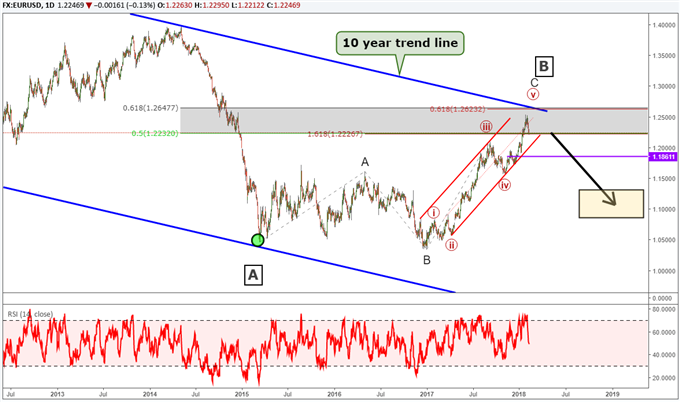 One benefit of reading the charts using Elliott Wave Theory is that we can determine the maturity of the trend based on how many waves have formed. As mentioned above, we appear advanced within the fifth and final wave of ‘C’. As we inspect the fifth wave that began in November, we can count four waves complete or nearly so (grey waves on the chart). As a result, the fifth wave of a fifth wave represents an aging trend that is ripe for reversal. For those keeping score at home, EURUSD is in wave (v) of ((v)) of C. Each of those three wave are ending waves.

According to the Elliott Wave principle, there are guidelines for estimating the distance of fifth waves and multiple wave relationships appear near 1.26. We believe EUR/USD may rise to finish the three-year expanded flat pattern and reverse near 1.26. If EUR/USD overshoots 1.26, that is ok, because the wave relationships are guidelines to help anchor you on the maturity of the current trend. 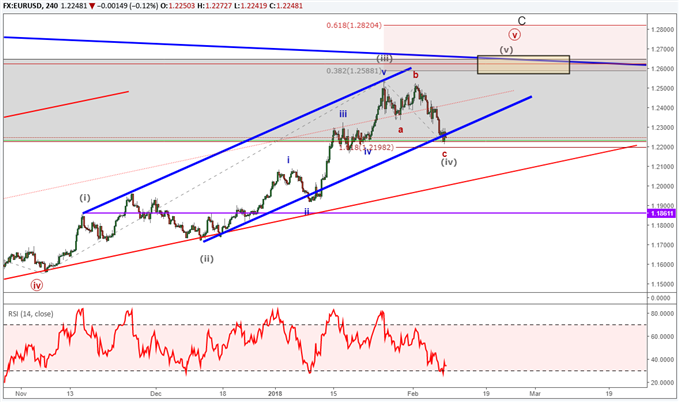 As you can see, several wave relationships appear in a tight price zone near 1.26. As a result, if EUR/USD does extend towards these levels, we believe it is higher probability of a bearish trend reversal than a bullish breakout.

What is the EURUSD Trading Opportunity?

Though EURUSD may advance to 1.26, we are nearing the exit ramp on the freeway. The better opportunities are when we have more reward relative to the risk. Though smaller trades can be considered to the bullish side, the better risk to reward ratios are if EURUSD is successful in reaching the 1.26 zone. At 1.26, good risk to reward ratios are available for short positions strategically placed. We will discuss those strategies (like breakouts) in future writings. Our Traits of Successful Traders research unpacks the importance of risk to reward ratios and how our mind handles winning and losing trades.

If EURUSD does turn lower, our initial target is 1.15 that contains the previous fourth wave low. Secondary targets arrive near 1.09-1.12.

How will I know if EUR/USD has topped using Elliott Wave?

There are certain Elliott Wave patterns that indicate a new trend in the opposite direction is forming. First, I look for a five-wave motive wave to carve to the downside. Secondly, we look for a three wave partial retracement higher. This 5-3 pattern is an early warning indication the near term trend has reversed from up to down. We have a one-hour webinar recording on “How to Start Your Elliott Wave Analysis”.