How will the market response to the RBNZ rate decision? Will the impact of this event produce a meaningful New Zealand Dollar move or could it even shift the broader assessment of monetary policy? Join me as I cover the rate decision live.

The Bank of Canada's decision to hike rates this past month has substantially altered the landscape for speculation surrounding global monetary policy. Markets have seen a substantial increase in volatility related to event risk that alters the policy spectrum for currencies and even broad global risk trends have shown a growing deference for monetary policy. That helps establish the backdrop for the upcoming Reserve Bank of New Zealand (RBNZ) rate decision. There is considerable potential for Kiwi (New Zealand) Dollar volatility specifically, but this event could further escalate to the status of global market mover under the right conditions.

Until recently, the Federal Reserve was the only major central bank that had made a move towards tightening or normalizing its policy setting from an extremely distended stimulus position. That conferred a serious speculative advantage to the Greenback particularly through 2014/2015 in the lead up to the first official hike in December 2015. In 2017, however, that advantage has significantly receded and allowed for other currencies to fill speculators' appetites. The Euro in particular leveraged a strong recovery this year as the group has showed early indications that they are starting to plot out their retreat from their own exceptionally easy program - negative rates and a stimulus program that is being employed. With the BoC's rate hike this past month, focus has shifted back onto the traditional carry currencies that are looking to lift off of record low yields that can add to a true carry advantage in a market that is stretching for any kind of return that can be found.

With the upcoming RBNZ rate decision, the market is both skeptical of an impending move but certain that a hike is inevitable a little further along. Looking at overnight swaps, markets are pricing in zero chance of a hike at this month's policy decision. That said, an actual hike would be a significant surprise that would theoretically force a substantial repositioning that eases back on the short exposure and would in turn motivate a yield-focused speculative rank to crowd into the Kiwi long trade. There would be plenty of options under that scenario from NZD/USD to NZD/CHF. A more likely hawkish scenario would be rhetoric with the hold that caters to forward looking speculation. A more selective approach would be necessary with that outcome, but pairs like AUD/NZD could gain traction. If the RBNZ takes an unexpectedly dovish outlook that undermines the conviction of a move in the foreseeable future, it can further deflate the Kiwi's recent gains. A reversal from NZD/USD and NZD/JPY in particular would be well placed with recent technical developments and a pullback in risk trends. We discuss the strategy with the upcoming RBNZ rate decision in today's Strategy Video. 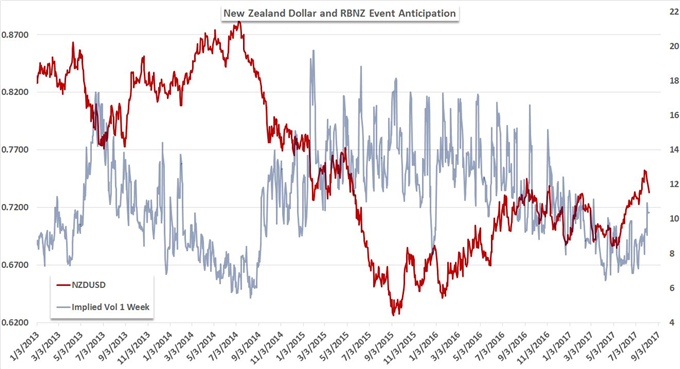 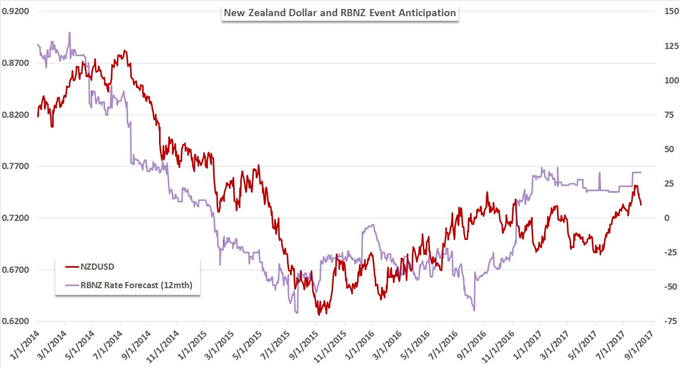 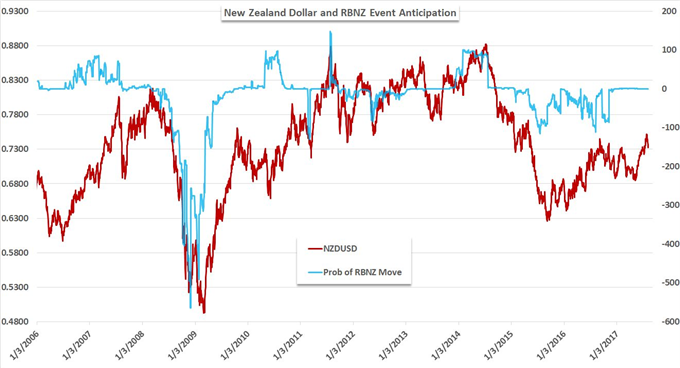