While Waiting for the Break, Consider the Alternatives

There was little in the way of progress to be found in the markets this past session – that is if you were looking for significant technical breaks (with strong follow through prospects) or productive trends. While there was some noteworthy event risk Tuesday, none of it translated into serious market movement. Over the next 48 hours, there are a few candidates in the run event risk that can potentially spark some serious movement in segments of the financial system – such as the Bank of Canada rate decision or Thursday’s US CPI release – but there remains a high bar to fundamentally change the market’s course. Eventually a systemic concern such as fear of central bank-led collapse of moral hazard is likely to hijack the markets; but until that time, finding opportunities that suit the environment may prove more fruitful. Consider the exceptional draw of the S&P 500 which came within 0.2 percent points of a record high close and a mere 1.3 index points from tagging an intraday record. The pull of a such a prominent level could very well urge a technical break, but what is the appetite and capacity for follow through. This is not just a phenomena of the major US indices. It is the state of the market as a whole. 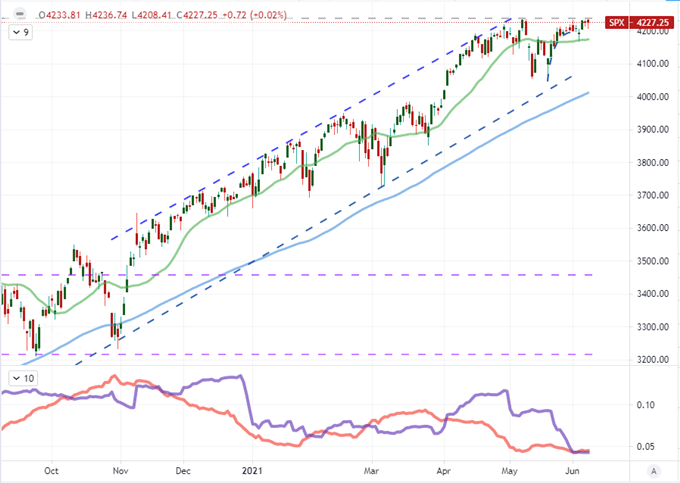 As we await the return of more boisterous volatility and sweeping trends, some of those candidates on the ‘eventual breakout’ list may better suit a congestion approach. There are many pairs and assets that have fairly obvious ranges, but leaning towards holding those bounds, it is perhaps best to filter for markets that have the greatest resiliency and better avoid known fundamental catalysts. AUDUSD, like all Dollar pairs, faces the Thursday inflation report; but its recent rejection of a remarkably distinct head-and-shoulders pattern makes it more interesting in my view. With broader range bounds out to 0.7900 to the upside and 0.7550 as support along with positioning data that shows retail traders leaning into the congestion, it seems adept to the circumstances. 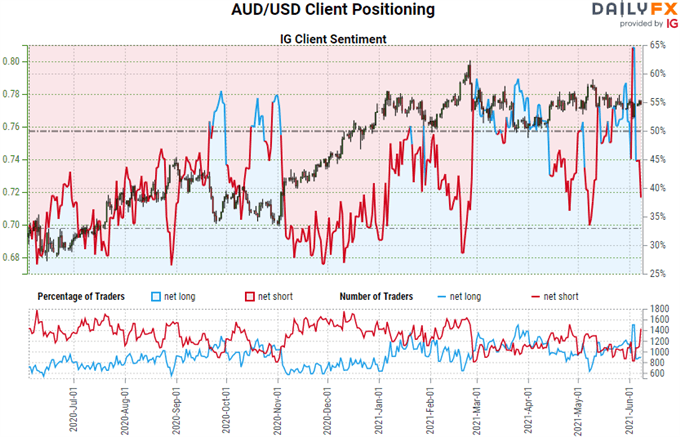 The Fundamental Themes and the Candidates

This past session, there were a few fundamental highlights that could have gained traction if the market were in the state to do so. On a more traditional path, the World Bank upgraded its 2021 growth forecast for the world to 5.6 percent – what would be the fastest pace of expansion since 1940. This clearly urged little response from risk assets or those markets that also respond to economic health (like Treasury yields). Speaking of Treasuries, the US JOLTS (Job Openings and Labor Turnover) data reported a record high 9.3 million job openings and similarly unprecedented 2.7 percent ‘quits’ rate. That fuels both growth and inflation (via wages) expectations, but those markets that are more sensitive to such winds offered little response. This same resistance to Treasury Secretary Janet Yellen’s remarks over the weekend that a slightly higher interest rate regime could be healthy for the US suggests market participants are conveniently playing down unaccommodating developments until the news is undeniable – perhaps with the CPI data release or next week’s FOMC decision and forecasts. 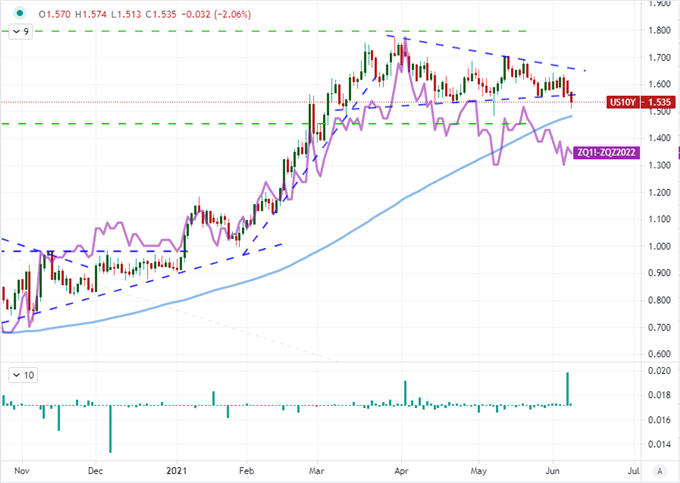 Similar to the underwhelming response to data and insinuation from yields and Fed Fund futures, the DXY Dollar Index found a weak bounce to keep the mystique in its possible bullish channel break late last week. That said, the daily trading range this past session was the smallest (as a percentage of spot) since March 26th – and the third smallest span in 2021. I keep pointing out these remarkably narrow channels of price action as extremes in activity tend to revert to norms from either direction. I do believe it is only a matter of time and motivation before more significant movement takes the most liquid currency. 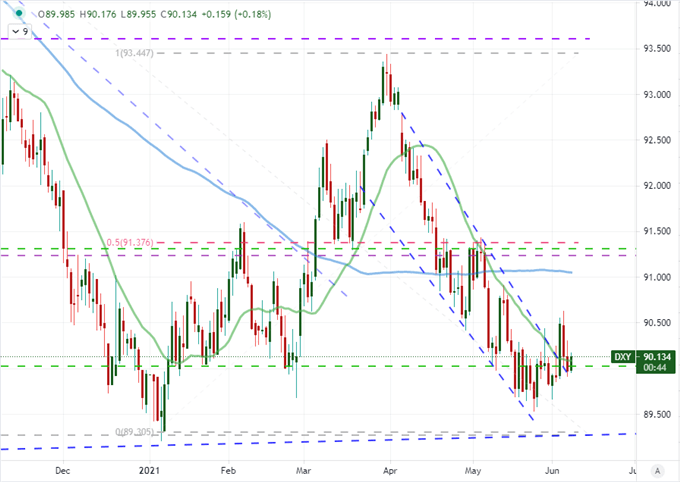 The Candidates for Charge and Their Timelines

Thinking in terms of probability for significant market movement, the Dollar likely has remarkable potential in the CPI figure. With the heavy debate over whether inflation is transitory and the Fed will be forced to adjust policy outside of the most gradual possible timeline, there is at least a lot of attention that will be drawn to the release. The impact it has after the release depends on how the data prints, but the lead up is likely to be more consistent: reticence to push the market one way or the other until the fundamental score is known. That means restraint through Wednesday. If there were a USD-pair that is even more prone to restraint, it would be EURUSD which has the ECB rate decision on Thursday as well and whose liquidity tends to dampen its moves under normal circumstances during periods of indecision. 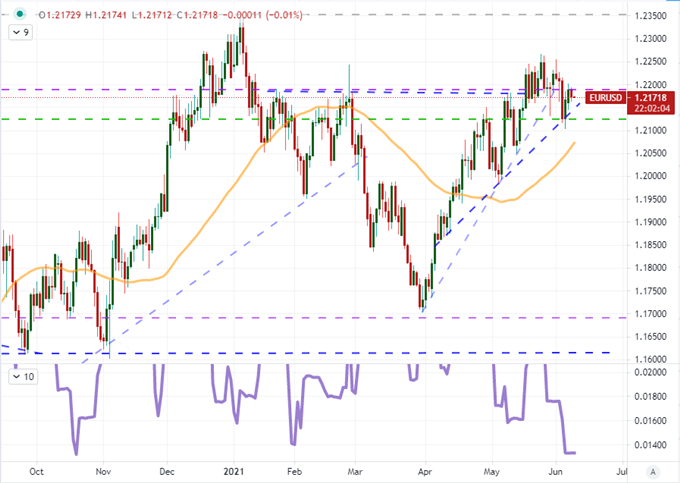 A better candidate for volatility in the immediate future is USDCAD. The pair’s technicals are the epitome of a coiled spring. The past 20-day (one trading month) ATR is at the lowest level since before for the December holiday period. Further, there is a multi-year descending trend channel that battering the market into support that represents a range of significantly lows back to 2015 and the midpoint of the 2011 to 2020 range. That said, the critical ingredient is the Bank of Canada (BOC) rate decision. While no change is expected with the rates, the group has significantly bolstered market attention and speculation with its previous move to taper its regular asset purchases. It is the first major central bank to take such a tangible step since the pandemic drove monetary policy authorities to flood the system. If they keep to the (slightly) hawkish rhetoric, it may be enough to extend the Loonie’s impressive run. Alternatively, a walk back of their confidence can lead to a corrective bullish break for USDCAD. 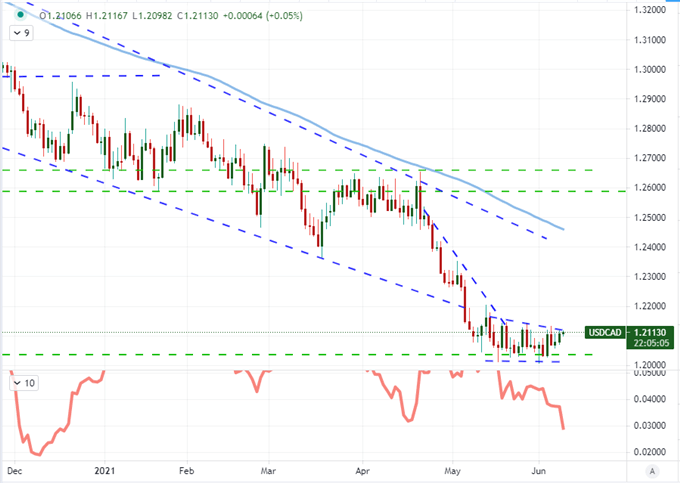 Taking the strategizing a little further, USDCAD has break potential despite the market’s worst habits; but it will still struggle with the Greenback’s anticipation of its own fundamental highlight the following day. Looking into the CAD-based crosses there are quite a few appealing pairs to consider. CADJPY is aggressively stretched, but it still has a ‘risk’ element that can be tied into Fed speculation. AUDCAD and EURCAD have their own appealing elements, but GBPCAD pairs another strong currency (the Sterling) while also harboring the most restrictive 20-day trading range in the pair’s history. Be ready for breaks, but don’t assume them. 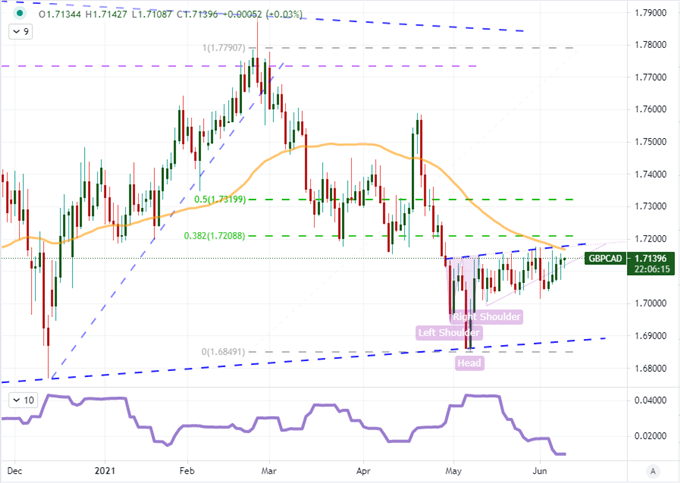