Ignoring Warnings to Squeeze More Out of These Depleted Markets

Liquidity conditions remain remarkably thin and fundamental the fundamental threats to passive optimism continue to pop up. Nevertheless, the benchmarks for speculative appetite have either held their bearish bearings or even progressed against the gathering fundamental clouds. Once again taking up the torch for defying doubts like a Fed warning of excess in capital markets and unmistakable employment report miss were the US indices. We will enter the new trading week with critical rebounds from the likes of the Nasdaq 100 and Russell 2000 while the core measures of the Dow and S&P 500 have returned to record highs. It is performances like what we are seeing on the Dow Jones Industrial Average that leads the faithful to claim traditional needs for fundamental support to be a matter of the past. That is a dangerous self-assured lull that is not uncommon in the markets. Sentiment can shift priorities and the bias for periods, but we never truly leave the course bearings. My evaluation of the week ahead is whether we can continue to coast if there are no disruptions to the contrary, or if quiet will start eating away at enthusiasm once again. 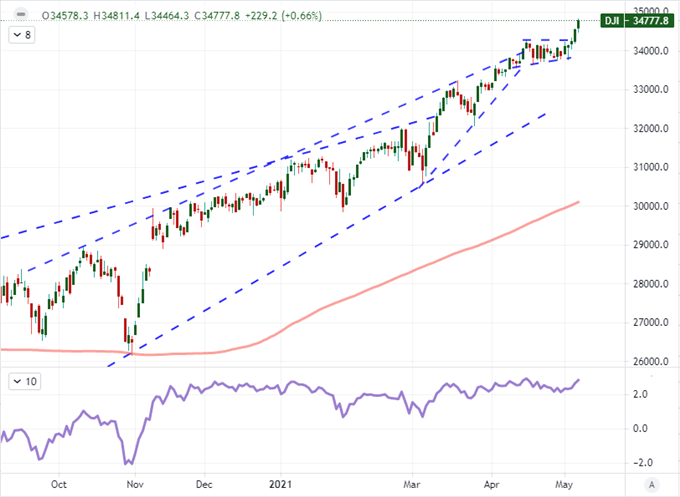 Behind the seemingly invulnerable climb in capital markets there are worries that are showing through uneven market performance and response to certain events. Despite the new heights of the Dow, there is concern over the Federal Reserve’s appetite to inadvertently keep the capital markets swollen. Tolerance for a temporary bout of inflation above the central bank’s target level is one thing. It can take months to prove or disprove persistent pressures that would force the group to navigate away from its extreme accommodation. However, with the group’s warning in this past week’s semi-annual financial stability report, there is yet another track of justification to backtrack on unlimited support with a similar tone to Treasury Secretary Janet Yellen’s warning (backed by the White House) that rates may have to rise in the foreseeable future to combat too-high inflation. In the report, the central bank said “valuations for some assets are elevated…even when using measures that account for Treasury yields…” and markets “may be vulnerable to significant declines should risk appetite fall.” I will continue to monitor the relative performance of the Nasdaq 100, emerging markets and carry trade compared to the Dow ahead. 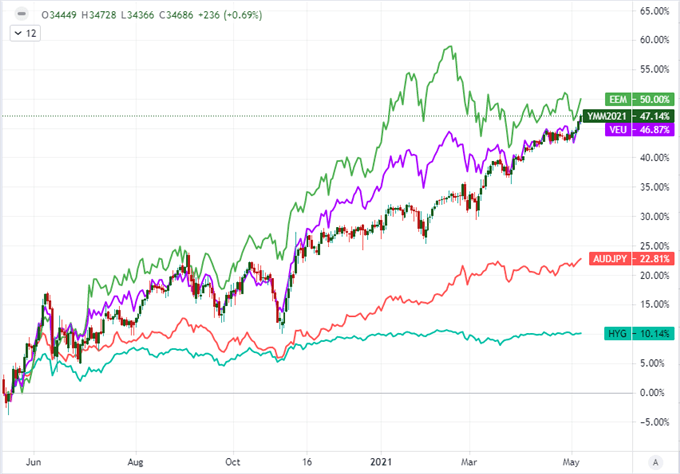 Looking at the economic docket for the coming week, there is a further reduction in the number of high-profile, market-moving events relative to the past month. What’s more, the more complex themes – such as fears over the eventual normalization of monetary accommodation – seem to have lost the plot. That, however, does not preclude a return to focus or carrying over secondary means of volatility. One of the most effective catalysts this past week was the US employment report for the US Dollar. Though the economy added 266,000 new jobs to the economy, it was far short of the 978,000 forecasted. While equities managed to overlook that contrast, the Greenback took a sharp dive on the news. It is remarkable that this holds such clear implications for the US currency but not the country’s capital markets. This will be a course that investors should keep a close eye on.

Chart of Change in US NFPs, ADP Private Payrolls and the ‘Surprise’ (Monthly) 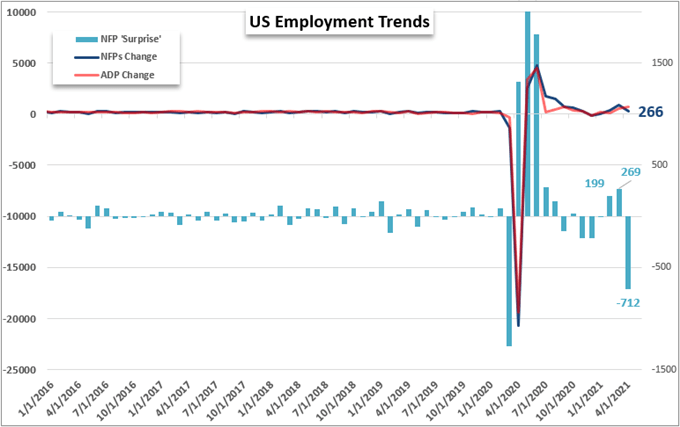 Another particularly impressive development to close out this past week was the hefty fundamental disappointment from the Canadian docket. The country’s own employment report showed a steeper-than-expected -207,100 jobs lost in April and a 0.6 percent point jump in the jobless rate to 8.1 percent. Adding to that, the Ivey manufacturing activity report dropped sharply from 72.9 to 60.6. From USDCAD, there was little move as the currencies’ respective reactions offset each other. Yet, for most other Loonie crosses, there was a pullback on the CAD from its stretched run. I will be watching this currency closely to start the new week with a particular eye to GBPCAD and CADJPY. 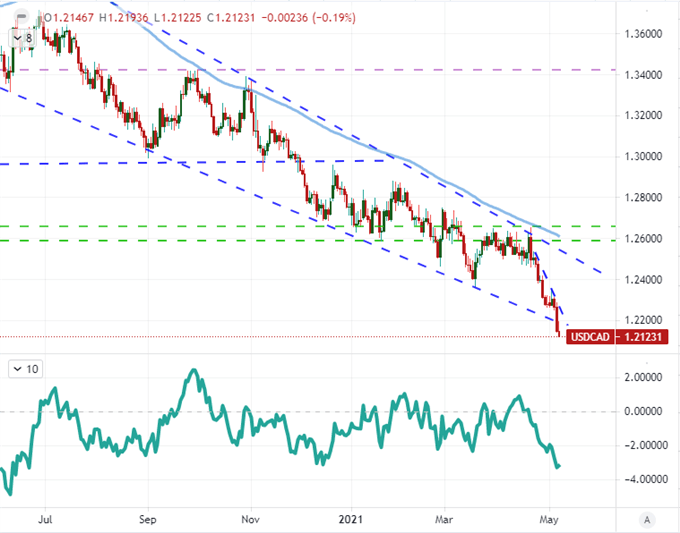 Top of the Watch List for Next Week: Dollar; Pound and Cryptocurrency

While there are a host of markets that offer interesting technical patterns and fundamental backdrop, there are specific areas that deserve more attention than others in my view. One of the top listings is the US Dollar. As mentioned before, the Greenback responded very poorly to the NFPs as well as the ISM services and manufacturing reports earlier in the week. The utter collapse of the DXY’s reversal pattern with Friday’s tumble – the second largest single-day loss in six months – disables quite a few pairs. While EURUSD is the first place many will look, there is staging for further technical cues on follow through from the likes of GBPUSD and USDCNH. The peak for potential catalyst to monitor will be Wednesday’s consumer price index (CPI) for April. This is the market’s favorite inflation indicator and the headline reading is expected to accelerate to an incredible 3.6 percent. That would be the fastest clip since September 2011 and would represent a serious strain on the Fed’s vow to tolerate ‘transitory’ pressures. 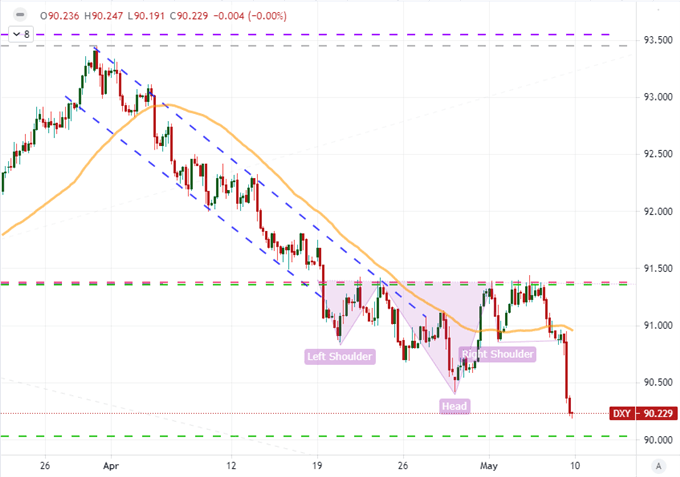 Taking a closer look at Cable (GBPUSD), there is a regimented technical pattern with a distinct range high at 1.4000 – benefiting an even number – and trendline support in the 1.3750/800 region. Any push or pull from the Dollar will hold serious implications for this picture, but it is worth also accounting for the Sterling’s own innate motivations. For event risk, the Bank of England Governor is scheduled to speak multiple times through the week, but it is the run of data on Wednesday that will draw my attention. In particular, the March and 1Q GDP data, along with the NIESR April GDP tracker, that will stand out as sparks. While GBPUSD is well positioned for action, there are other crosses that can represent options for bullish or bearish intent. Should the Pound rally, I prefer GBPCAD against 1.6850 and EURGBP presents a better GBP-bearish prospect with an 0.8720 breach. 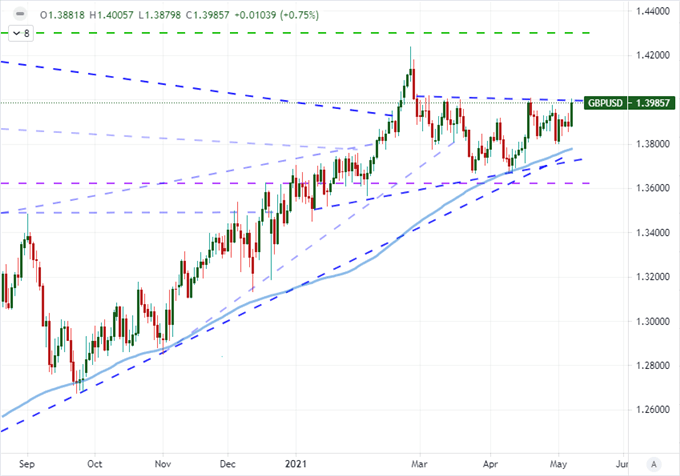 Further outside the traditional bounds of financial maturity, the cryptocurrency market is one to check in on frequently. Over the past years, there has been a transition of preferred vehicle for leading speculative appetite that has rotated through the FAANG, meme stocks, Bitcoin. At present, its seems Ethereum and Dogecoin have drawn the focus of the speculative drive. Both have pushed record highs late this past week (while BTCUSD continues to consolidate) and excitement was clearly building up to a particular event: Tesla founder Elon Musk hosting Saturday Night Live. There was heavy speculation that he would mention Dogecoin once again and perhaps spark another rally from the coin similar to various other instances in recent months. The inventor shared the picture below on his twitter feed which seems to validate the speculation. There has been lots of discussion of watch parties for this event and crypto is one of the few assets that trades with any significant liquidity over weekends. That adds up to serious potential. 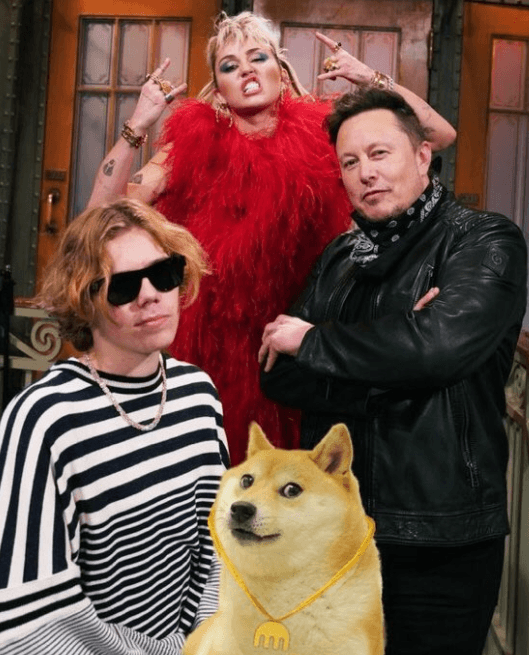 Picture from Twitter.com, Created by @elonmusk