A Strong Start to the Week for General Risk Assets

While I have my preferences for imperfect measures of risk benchmarks, there was a fairly broad representation to the bid behind speculative sentiment through the opening session of the week. If the collective sentiment were so inclined, there was an array of headlines and event risk with which pessimism could have muscled it way into the market’s psyche. Nonetheless, those troubles were quieted with capital markets pacing a charge higher. The top of my list of assets to watch is still crowded out by the benchmark US indices. Of these imperfect measures, the S&P 500 maintains its position as one of the most representative of US markets and speculative exposure to ‘the markets’ through derivatives like the SPY ETF, emini futures, CFDs and more. That said, the index strong armed a 3.6 percent gap higher to start the week and ended the session 7 percent higher relative to Friday’s close. That latter metric was modestly outpaced by the Dow, but that doesn’t change up the comparative influence. Technical milestones have been reached with this jump – 38.2% Fib of the tumble of the past two months, three week high, proximate to the 20% bear market correction mark – but I remain skeptical of any lines in the sand that will override risk management in these troubled times. 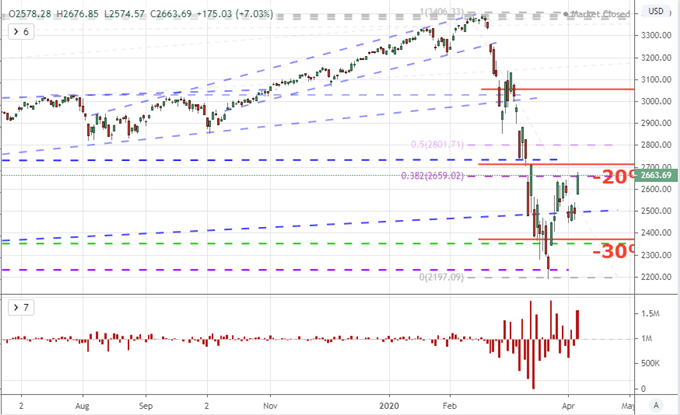 It seems the markets at large are similarly dubious of the sustained charge, despite the lift in risk-leaning assets. Last week, I took a poll asking traders in Twitter what they expected from the Dow through the end of this current week. At the time that the poll closed (mid last week), the majority leaned heavily towards those that expected new lows from the blue-chip index at just shy of 73 percent anticipating a new low. If I were to run the poll today, I suspect the ratio would balance a little more given the gains; but the general skepticism would likely show through clearly. The principal issue is the sustained high level volatility. So long as anxiety remains high, the potential for sudden and charged reversal remains a probable scenario. 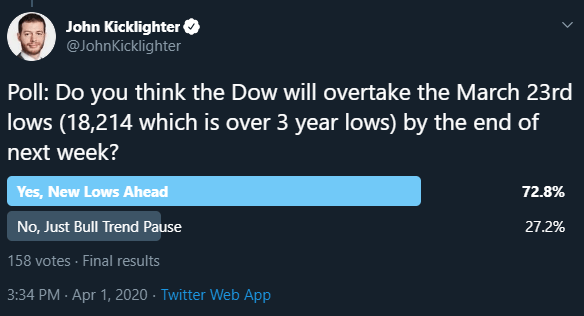 A Pesky Reminder of Recessions and Liquidity Pitfalls

What would turn the crowd from slow saunter higher back into panic delivering? Take your pick. There is broad capacity for systemic issues like a trade crisis or freeze in a critical element of the financial system, but more probable and mundane factors are just as threatening. The data that crosses the wires will act as a cold reminder that a potentially history-defining recession is setting in. Last week, the US NFPs reported a net drop in payrolls of over 700,000 jobs while the service sector (the largest component of the economy by far) slid. Monday, the US updates were light, but figures like the Eurozone investor sentiment more than made up for the absence. In a separate poll, I asked traders what percentage of the global economic retrenchment had be priced in with the February-March tumble in quartiles. Collectively, over 60 percent of respondents believe we haven’t priced in half of the economic fallout. 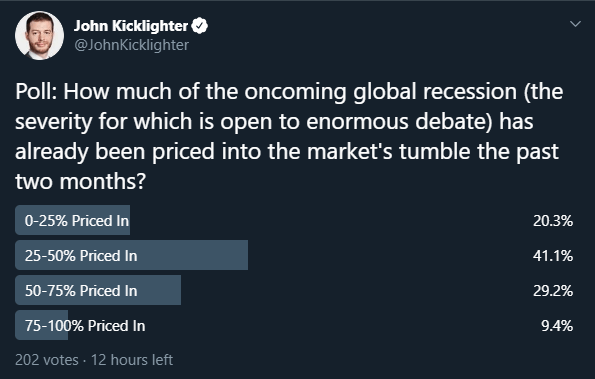 Looking out over the next 24 hours, there is another round of event risk from across the globe that will slowly erode our habit towards complacency. Better than expected readings will be eyed with skepticism for what future iterations will bring while the troubled updates will be assessed for how the market is already prepped for the unfavorable news. In the data, localized event risk can and should be watched for the likes of the Australian Dollar and Euro for the RBA rate decision and the Eurogroup meeting respectively. However, my interests remain with the systemic. On that front, financial stability will be iterated by the foreign reserves figures from the likes of the China, Australia and Switzerland. My attention will be applied to the emerging market countries reporting these numbers in particular as Dollar troubles are most pronounced in these already risk-laden, key players.

Acute Volatility for the Sterling and Oil

While I am a strong proponent of watching the dominant forces at work in the financial system for a top down read, that doesn’t mean we shouldn’t keep tabs on more targeted volatility events. One point of risk accelerated Monday with the news that Prime Minister Boris Johnson who was diagnosed with COVID-19 10 days ago and was subsequently admitted to the hospital on Sunday was admitted into the intensive care unit Monday afternoon. Though there are procedures to reduce the risk of absence by a high level official these markets are tuned into troubling headlines like these. Watch GBPUSD as investors weigh the risk, but also consider what these means for other countries that see key officials influenced by this pandemic.

Chart of GBPUSD and Pound Volatility Index with Gaps (Daily) 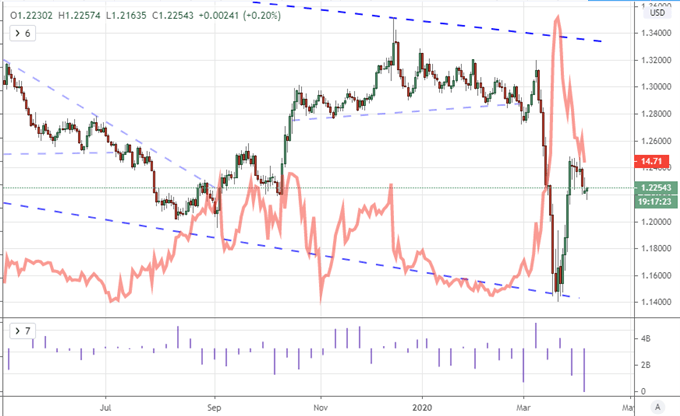 Another candidate for targeted event risk this past session was crude oil. Last week ended with reports that key oil producing members were ready to bury the hatchet and agree on production cuts to help stabilize the commodity’s price sometime this week. Yet, over the weekend, that meeting between key members Saudi Arabia and Russia seemed to breakdown. News that the meeting was back on but that the US and Canada would not be participant to the OPEC+ gathering added another foil to the back and forth. This is a growth-sensitive risk asset which should be monitored for a broader understanding of speculative perspective.

Chart of US Crude Oil Futures with Gaps (Daily) 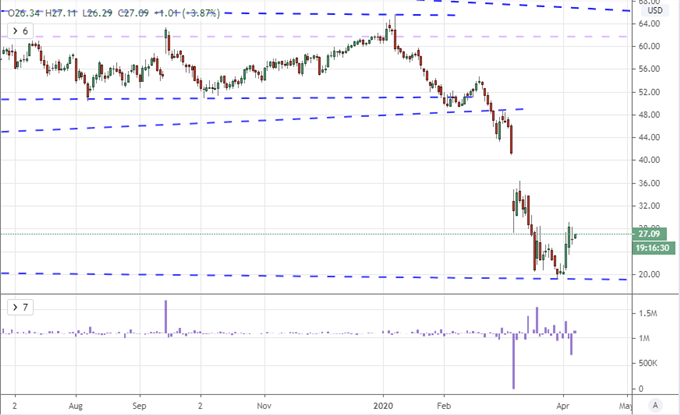