Both GBPUSD and S&P 500 Advance Halted by Brexit Headlines, EURUSD In ECB's Pull

Brexit Developments are Starting to Gain a Global Audience...And Fears

The negotiations between UK and European officials to work out their divorce is not a new topic. This contentious theme has weighed on our collective consciousness for more than three years now. Yet, we approach the latest make-or-break deadline (October 31st) for this break, appreciation over the stakes have risen - perhaps even to the point that the 'rest of the world' is starting to appreciate its exposure to these very large economies. A previous two weeks of sudden momentum fostered by the UK Government finding common ground with Europe's team earned the Sterling (and Euro) a significant rally, but it would also amplify the sensitivity to problems along the way. The first trip point came this past Saturday when Parliament ruled the deal would not be approved without legislation to implement the effort. That wasn't a fatal development, but Tuesday's events are a deeper cut.

The Government brought its withdrawal agreement bill sorted with the EU to the Commons for approval inan attempt to keep Prime Minister Johnson's promise to leave the Union by the end of this month 'one way or the other'. Surprisingly, the MPs voted in support of the deal in concept with a 329 to 299 margin. However, the promise this represented hit a wall when the question of the PM's accelerated time frame was rejected 322 to 308. Before the session, Johnson said that he could pull his bill and call a general election if his timeline was rejected, but that hasn't yet been pursued. Now the Government is waiting for the EU's ruling on an the extension requested Saturday evening with the question of how much extra time could be granted (if any) hanging over the market's head. 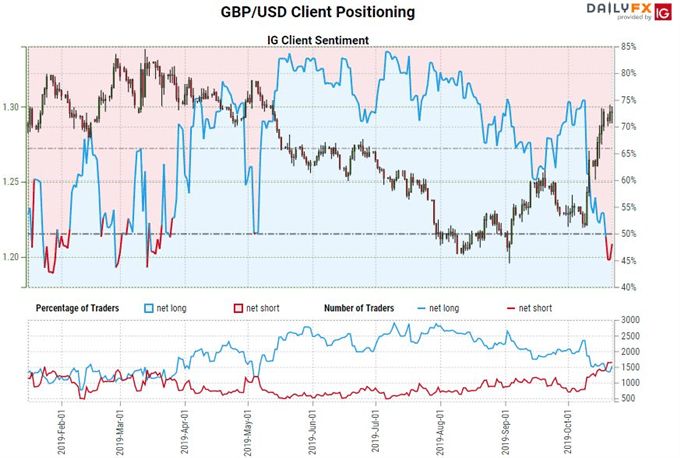 Naturally, this development did not go down well for the Sterling. The currency has driven higher this past few weeks with the fastest rate of climb over a 10-day period for GBPUSD in over a decade. That is a lot of enthusiasm in a short time even if it isn't a fully absolving of the stability fears that have been depressing the markets for the past three years. The potential for volatility behind the Pound will remain exceptionally high and that means a serious threat of sudden directional changes. What is more interesting from my perspective is that this particular theme is starting to register on a global scale. After the vote, risk appetite that was building broad risk assets to the cusp of breakout (the ACWI all-world equities measure is below) took a hit back to or below key milestones. This says as much about the sensitivity of the market's appreciation of the contrast in risk positioning and value as it does the importance of this regional theme. Both are critical and both argue against a free-and-clear risk outlook. 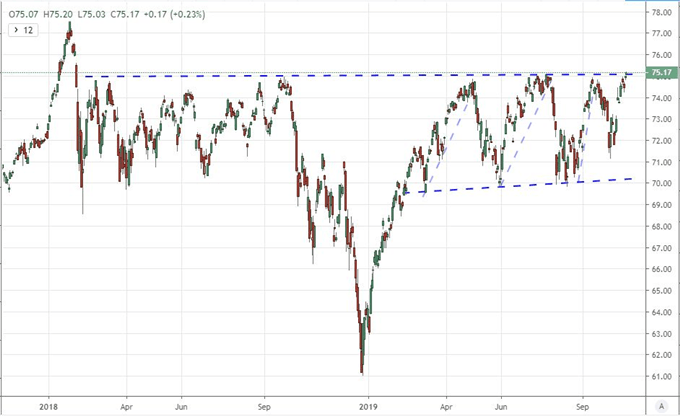 It is nothing short of remarkable that we are facing fairly regular warnings of possible recession for key economies or the world overall, and yet favorite benchmarks like the S&P 500 are positioned just below record highs. Compliance has made a regular appearance over the past decade, but what is securing it these past months in particular? Hope around thawing trade war conditions has certainly played its fair share of speculative enthusiasm. As it stands, we have not seen any material update or detail issued on the United States - China agreement struck the Friday before last in what is called the 'phase one' deal. This good will only stretches so far. Furthermore, the risk inherent in the US-EU escalation is increasingly difficult to miss. There are still high-profile competing forces from Trade Minister Malmstrom pushing for a retaliation against the US for its agricultural tariffs to pragmatic German Finance Minister Scholz who is attempting to avoid the Trump administration's extremely relative nature when it comes to confrontation. For this reason, EURUSD has turned into a preferred signal for me, overtaking USDCNH.

Chart of EURUSD with USDCNH (Daily) 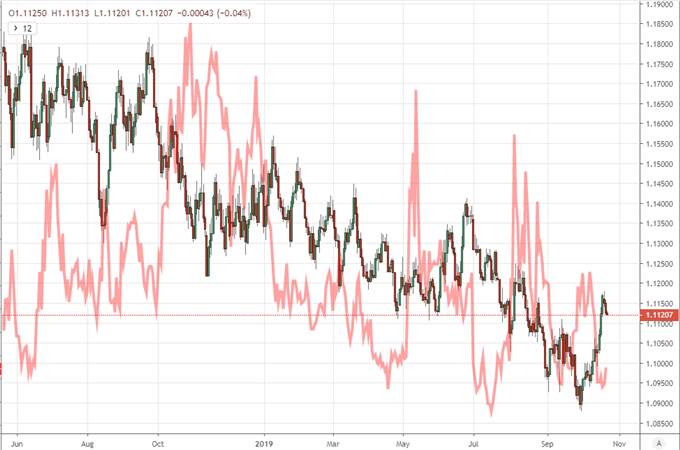 Measures of growth make a far less convincing prop for speculative appetite, but it cannot be ignored for volatility. This past session, there was scheduled event risk in the Bundesbank's (German central bank) economic update warning that Europe's largest economy may already be tipping into recession. I will be watching the Thursday run of October PMIs from Asia (Australia, Japan), Europe and the US as a comprehensive update to the big picture, but there is something a little more immediate to process in the meantime. The US quarterly earnings season is in full swing with the UPS and Procter & Gamble suggesting improvement, while Harley-Davidson issued a very prominent update announcing a $21.6 million loss owing largely to tariffs with China and the EU. In the upcoming session, the corporate reports reach a more extraordinary level. For blue chip economic reports, Boeing and Caterpillar are key Dow components which should make the Dow-S&P 500 ratio an interesting pair to watch. Ford and Microsoft after the bell will offer a signal to a key trade war concern (with the US) and a general overview of equities respectively. 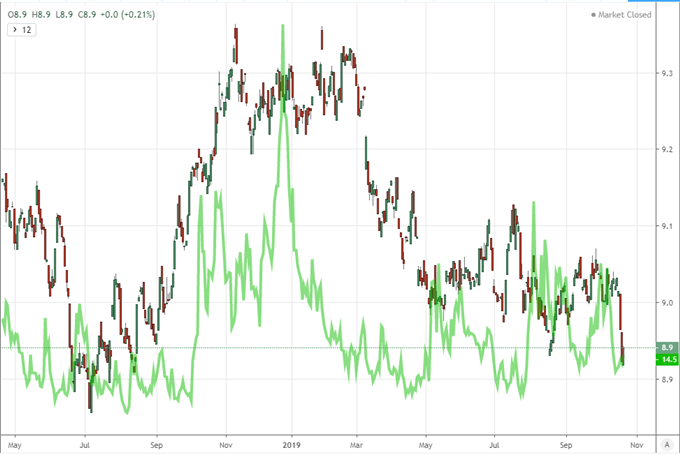 Another theme that will be exerting its heavy influence over the global market over the coming session is global monetary policy. The baseline concern is anticipation around the European Central Bank (ECB) decision on Thursday. Anticipation can have a profound impact on market activity - sometimes more reliable in arresting progress than an unconventional development can generate in volatility after the fact. At its last meeting, the ECB announced an exceptional round of easing between a rate cut, reviving stimulus and tiered lending rates to support banks. It is unlikely that a move follows so close on the heels of dovish policy at the fringes, but the overnight swaps market is pricing in an unexpected 25.5 percent probability of a hike. That is a remarkable contrast to the 92.5 percent chance of a third consecutive rate cut priced in for the Fed next week. Consider this for EURUSD going forward. 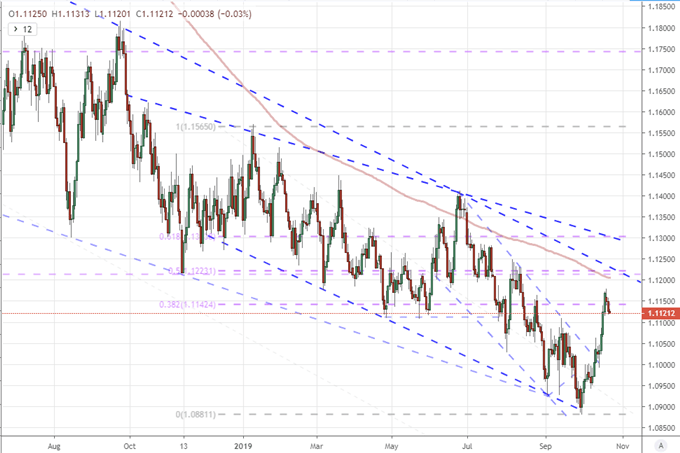 While the relative pace of rate cuts and stimulus matters for the relative bearing of the major pairings, don't forget that there is a direct connection to risk trends. This past session, the ECB released its bank lending survey which seemed to signal that European banks had increased lending despite the concerns that negative rates carry. That is where the favorable signals ended. Another report indicated that the Fed injected $99.9 billion in short-term liquidity while also adding $7.5 billion in permanent funding for the system. China in the meantime similarly had to supply stability with 250 billion yuan worth of 7-day reverse repo operations. Don't ignore the troubling signal this may signal.