It can be difficult to evaluate the most potent fundamental theme in the kind of market that we are witnessing at present. There is no small amount of premium behind benchmarks like the US indices and recent activity has proven measured, with even a slight 'risk on' drift. Yet, given the tumultuous headlines and forecasts we have been dealing with - trade wars, recession fears, etc - we know this isn't a reflection of moderation and outright optimism. At best, it is a side effect of complacency and more likely a situation akin to 'a deer in the headlights'. Tuesday, there was a drift in risk assets that pushed provocative pressure (the EEM ETF), left some to slip (yields and junk bonds) and saw the S&P 500 carve out another exceptionally small trading range. 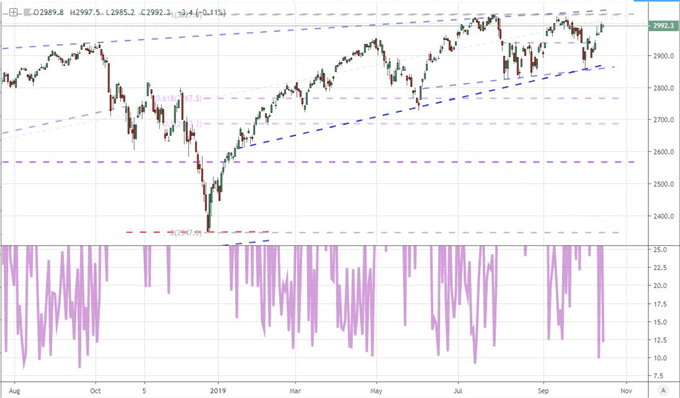 On the docket, the most tangible fundamental theme was the state of global growth. While the IMF's World Economic Outlook (WEO) already set the tone with a forecast for the worst pace of global expansion since the Great Recession, the update on the financial system that is staging the tepid outlook for expansion offered better insight into how quickly this previously abstract risk could turn septic with serious ramifications to stability. The report reinforced the concern over growth with highlights around the ill effects of trade wars and cyclical problems, but it would also add a very prominent reference to monetary policy. The group warned that extreme accommodation carried a 'cost' with investors pushed to take more financial risk in order to make returns. We have discussed this in detail where the faith in central banks has afforded much of the speculative build up over the past five years and leaves us in a fundamentally risky position should that conviction faulter. Now it is a mainstream concern. 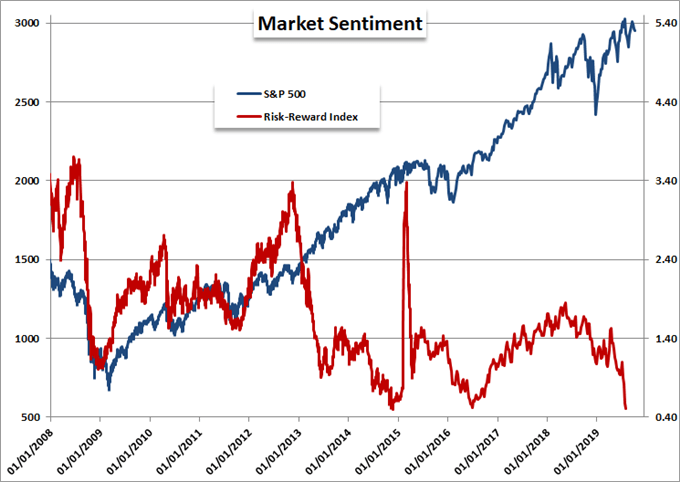 Growth concerns will remain a top issue moving forward - even if there is anticipation rather reaction. Keep close tabs on headlines that discuss the implications of all the warnings issued these past months, take stock of data like the weak US retail sales report as it can be interpreted through its growth implications as well as the state of the US Treasury curve which is now a favorite among arm-chair economists (me included). If we are looking for a more definitive update, the Chinese 3Q GDP on Thursday evening / Friday morning will pull more than its fair share of weight.

Trade Wars Will Carry Amplified Potential for Market Volatility Ahead

If you are following the Chinese growth update - which you should - pit its influence over USDCNH against the developments in the US-China trade war headlines. Through the end of this past week, there was an unmistakable swell in capital markets that was directly linked to enthusiasm around the improved relation between the United States and China. Friday left us with the 'phase one' deal which included a number of promises but a few clear moves that forestalled more pain down the line. It is telling that we have not seen any material progress in risk trends or even USDCNH since that news crossed the headlines. Skepticism prevails with scuttled efforts in previous months fresh in mind. The market was details and true commitments. They may not get them until the APEC meeting next week when President's Xi and Trump meet, and they may not find it at all. How long can markets maintain buoyancy on hope alone? 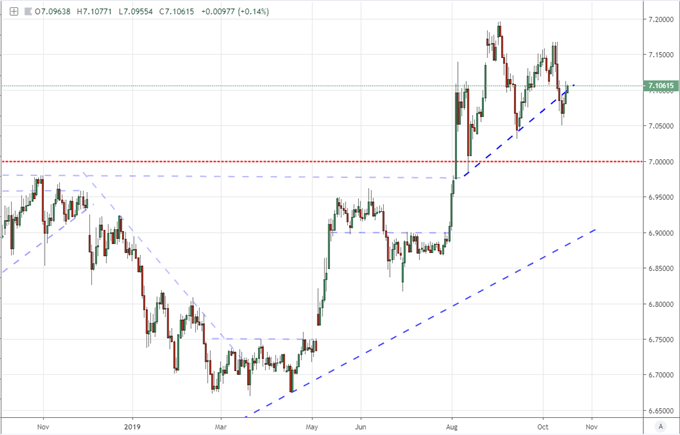 This past session, there were a few morsels tossed to the market likely designed to stretch confidence out a little bit further. President Trump remarked that Chinese purchases of US agricultural goods had already begun. Treasury Secretary Steve Mnuchin said the intellectual property protection discussion was 'quite broad' and the discussion on the Yuan made him more comfortable. In the meantime, Beijing hasn't invited the US delegation to continue negotiations in China and there are still suggestions China is questioning the terms of 'phase one'. Moving forward, a 'bearish' turn around this theme will likely come on slowly unless officials want to make a statement and dissolve talks publicly. Alternatively, a bullish turn would like occur in more dramatic fashion as it would likely come with a definitive update. That creates skew in related assets like USDCNH and perhaps even risk assets.

A more pressing trade war front through the final 48 hours of trade this week is the situation surrounding the US and EU. The United States is due to implement its tariffs on certain European goods starting Friday. It isn't so much the 10 percent tax on imported planes that truly raises risk but rather the 25 percent levy on agricultural and industrial goods. Supposedly they are still negotiating but President Trump remarked the US couldn't 'lose the trade war' with Europe which doesn't bode well and Germany's central bank warned a US-EU trade war could carry more severe repercussions than the US-China trade war has. Keep tabs on EURUSD. In the meantime, the Fed speakers this past session worked to justify their dovish shift while it is growing clearer that a group of ECB officials is planning to disrupt incoming President Christine Lagarde should she keep the exceptionally dovish bearing. 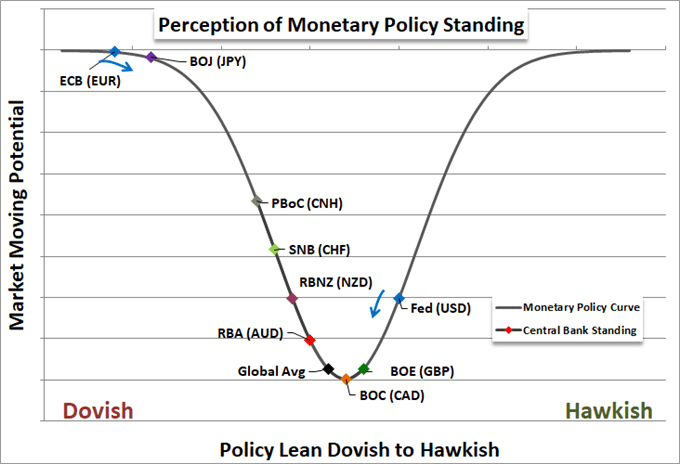 Pound Volatility Amplified as Market Prices in a Brexit Breakthrough

There are a few more targeted events on tap over the coming upcoming 24 hours including the Canadian manufacturing sales, Australian jobs figures and US housing starts. However, the weightiest event that is good for volatility but doesn't quite make it to full global status is the status of Brexit. This past session, the headlines around the long contentious UK-EU divorce found another wave of optimism supported by a steady flow of headlines. Amid discussions, some of the most pessimistic participants voiced rare optimism with Germany's Merkel saying there were in the 'final meters' and France's Macron remarked that they were just finalizing the agreement. Ultimately, EU Chief Negotiator Michel Barnier said an agreement wasn't ultimately reached Wednesday night, but reports were suggesting a breakthrough may be found Thursday at the first day of the EU leaders’ summit.

If that were to happen the GBPUSD and the Pound in general has a lot of recovery to still put in for. Alternatively, even if the talks dragged on, Prime Minister Johnson is still bound by Parliament's ruling that he would need to seek an extension. Such an outcome wouldn't signal a collapse, but there is a lot of short-term premium that has been built into this currency which could suddenly deflate. In general, expect volatility. 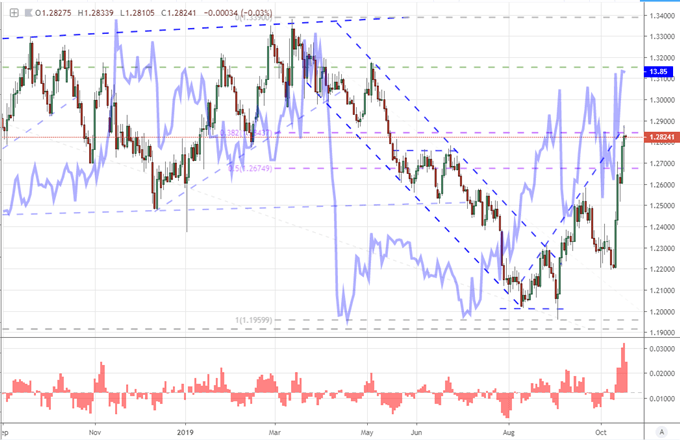