Spot USD/CNH price action has drifted lower to its weakest reading since September 15 as the Chinese Yuan rallies in response to recent trade progress – coined a Phase 1 Trade Agreement – made between the US and China. The agreement made between Sino-American negotiators detailed a large agricultural purchase by the Chinese in exchange for the US’ removal of a 5% tariff tranche on $250 billion of goods imported from China originally set to go into effect on October 15. With the prospect of lower tariffs, the offshore Yuan has climbed while fears of PBoC currency devaluation aimed at offsetting the economic impact of tariffs on the country’s exports recedes.

“Gestures of goodwill” by both sides has led to the latest trade war breakthrough, although deal enforcement still needs to be worked out while the formal agreement has yet to be put into writing. Moreover, commentary from Chinese officials from over the weekend indicated that the two sides have made “substantial progress” but did not make any mention of a deal or agreement. Also, the White House has refused to commit to removing another trance of tariffs on Chinese goods slated for December, which China will likely want removed before signing any formal agreement. 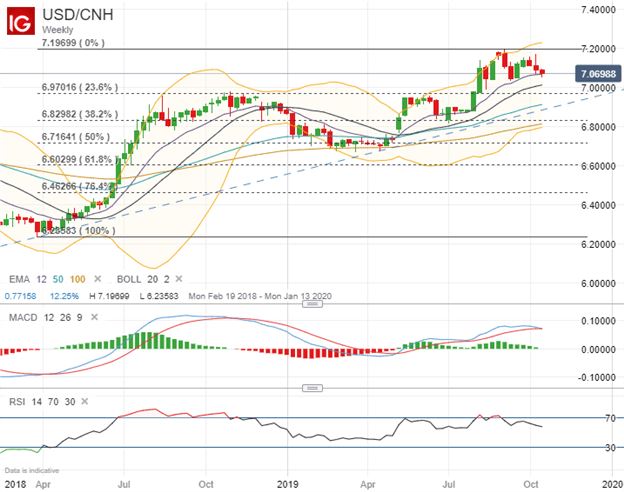 Additionally, more difficult points of discussion like intellectual property rights, Huawei and entity blacklist among other issues remain unresolved. Consequently, the recent rally in the Chinese Yuan could prove short lived as it has previously since the US-China trade war first began. That said, the prevailing uptrend in spot USD/CNH comes into focus when looking at the currency pair’s weekly price chart. Since the Chinese Yuan breached back below the 7.1000 handle the next major technical area is highlighted by the ‘taboo’ 7.0000 price level near confluent support provided by the 23.6% Fibonacci retracement of USD/CNH’s trading range since April 2018. 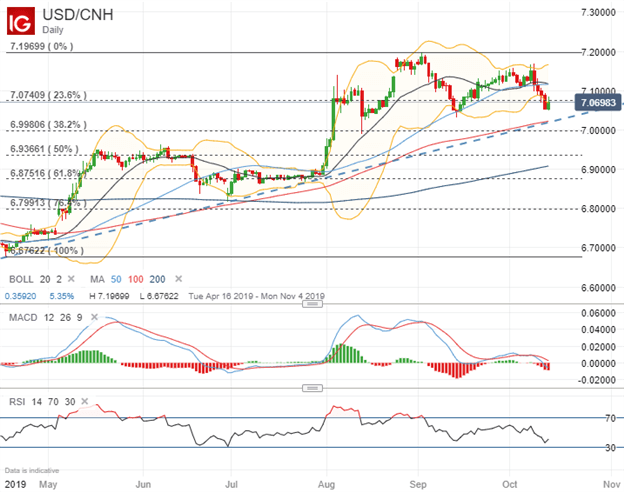 Nevertheless, it is rumored that President Trump and President Xi could potentially sign a formal trade deal November 16-17 at the APEC conference in Santiago, Chile. Recent history indicates that skepticism of follow-through is warranted, however. Rewinding a few months back to the Trump-Xi G20 Summit meeting in Osaka, Japan which yielded a trade war ceasefire reveals that the truce was short-lived. In fact, President Trump announced he would levy another tranche of tariffs on Chinese goods a month later.

As such, there is a material risk that the latest stretch of progress made between the US and China fails to materialize into a tangible deal that ultimately ratchets down the trade war. Correspondingly, the recent rally in the Chinese Yuan may prove to be short-lived – especially considering that the prospect of more tariffs (Trump’s biggest bargaining chip in the trade war) is still a major possibility down the road.