There was an unmistakable boost to risk appetite registered through the performance of the speculative markets. This climb is remarkable for two particular reasons: the key fundamental themes that the market has responded to these past months added to concern rather than convidene and some of the benchmarks for risk appetite have now moved into position for critical breakouts. My favorite, imperfect measure of speculative bearing, the S&P 500, posted a climb that contrasted nicely to Monday's candle - one of the smallest daily ranges over the past year - with a gap higher and decent advance. This performance positioned the benchmark on the cusp of both a well defined trendline channel resistance and the cusp of a fresh record high. To extend progress, a critical decision will need to be made by market participants: is there enough conviction for a breakout and meaningful follow through? That is no small feat and a remarkable contrast to the general mood in the markets and the signals being issued through traditional value markers. 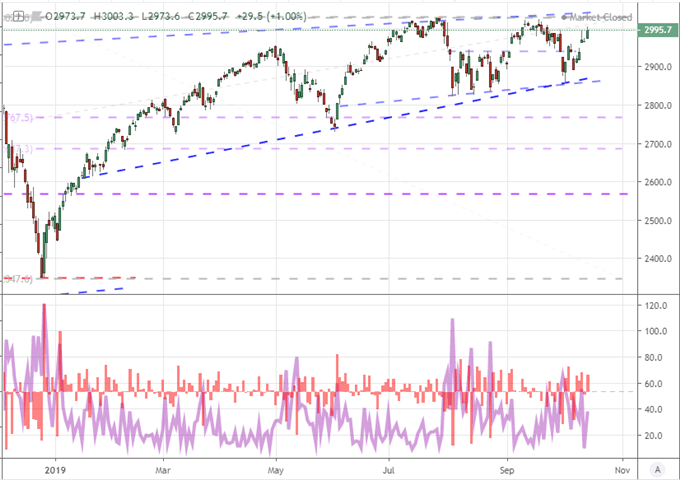 If the set up to a big break were only the picture being offered for the US indices, I would take a more aggressive 'fade' stance to questionable attempts to push the boundaries. However, there is evidence that the speculative appetite is not isolated. In addition to the US indices, the 'rest of world' equity picture rallied and the global measure (ACWI) has moved within reach of a remarkably well-defined bullish boundary. Furthermore, the EEM emerging market ETF is facing its own prominent resistance while the more growth-sensitive crude oil and global government bond yields are certainly lagging for pace. In short, correlation denotes an unmistakable 'risk' bid; but earning a boost is far from establishing a trend. That is not to say that the herd can't decide to ignore all troubling signs and source their own enthusiastic bid, but that would be improbable to sustain without something tangible to sustain momentum. If risk trends do hold out, I will look to related assets that still sport a sentiment discount and aren't as sensitive to each up and down in sentiment. Yen crosses (carry trade) fit this bill and EURJPY has an interesting picture. 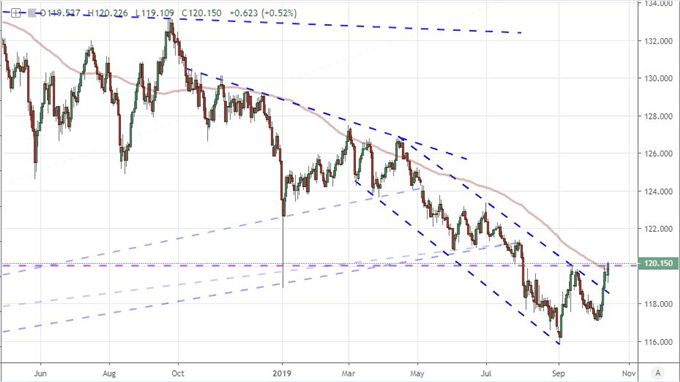 My skepticism over critical breakout and follow through scenarios for the likes of S&P 500 is born from my concern over the fundamental backdrop. It is not particularly unusual to see the market prioritize themes/issues to fulfill a prevailing bias in the underlying market and seemingly defy explicit fundamental detriment. However, the equation for default complacency and bullish drift is very different when we have the kind of inconsistent progress that we've seen this year, we face more systemic threats and the rank dubs our situation "the most hated bull market in history". It is even more difficult to muster conviction when we see that the most effective themes are actively working against the market's charted course. Progress on trade wars was the most tangible foothold for risk trends in this most recently swing higher, but we haven't seen any tangible development to define next steps nor even solidify the plan since Friday's stated breakthrough. We are still waiting for everything to be written out and agreed to while reports that Chinese officials are dubious continue to erode conviction. This does not even take into account the lingering concerns such as the anticipated December 15 tariff increase by the US. 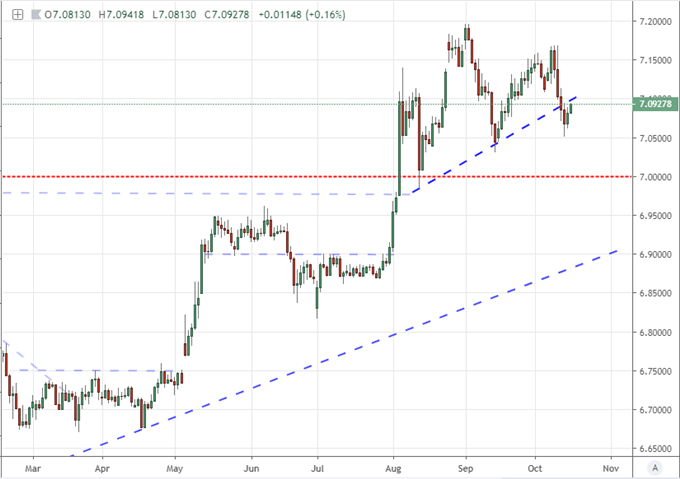 Far more antithetical to Tuesday's developments and the foundation for my contrarian (to short-term) view is the overt pressure added through a weakened global growth update. The IMF's semiannual World Economic Outlook (WEO) issued the warning we had expected. The global economy was seen slowing its pace of expansion to 3.0 percent for the slowest pace since the financial crisis, with the 2020 downgraded 0.2 percentage points to 3.4 percent. This 'recovery', warned the IMF, was not broad-base and "remains precarious". They would also list out their long measure of concerns including the recession in manufacturing, the worst picture for global trade since 2012 and unconducive political conditions to expansion. With a fairly stark warning that monetary policy has been helpful but is perhaps reaching its limits without fiscal help, the warning could not be any more straightforward from such a group. 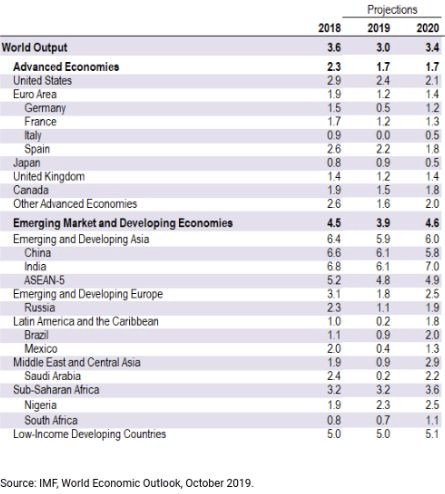 Ahead, we may find that trade wars has a breaking headline which could take over the wheel, but that is not something that we can reasonably rely on - particularly with the anticipation of the United States' tariffs on the EU going into effect on Friday. Growth doesn't have as explicit a benchmark as the WEO report on tap, but China's 3Q GDP update is due on Friday and the IMF's GFSR (Global Financial Stability Report) will be just as pertinent for the assessment of economic health through financial insight. This is where I will expect influence, but it is best to be open to the unexpected in both key fundamental focus as well as the bearing in sentiment.

Looking outside of the principal fundamental themes jostling for absolute control of the big picture fundamental current in the market, there are still high-profile currents that are stirring up significant market movement elsewhere. In fact, the developments behind the long-standing Brexit divorce may be adding some lift to the general enthusiasm building behind the course of global trade wars. Yet, if that is the engine for this theme versus the US-China or US-EU situation, I would not hold out too much confidence.

Nevertheless, there was clear lift in the headlines around the UK and EU negotations this past session. While the day's overall session was not as impressive as the two-day rally through the end of past week - the biggest such climb in over a decade - the more concentrated 60-minute performance intraday was exceptional in its own right. In fact, the one-hour rally was the biggest such jump seen over that time frame in at least two years. Seeing such a targeted surge makes clear that it was a news-generated climb. On the wires, we saw reports that a deal may be close at hand - as soon as Wednesday afternoon. EU Chief Negotiator Michel Barnier said an excit before the deadline on October 31st was "more and more difficult" but that does not preclude a delay.

According to an economist poll from Reuters, a delay followed by an eventual free trade deal is the baseline expectation moving forward. Today, there is a 1922 Committee of Conservatives on tap which suggests a deal draft will be presented. Keep tabs on this situation because anticipation and short-term premium are set very high. A genuine breakthrough can earn significantly more Sterling climb but a shortfall can quickly lead to an implosion to the recent gains. Volatility either way. 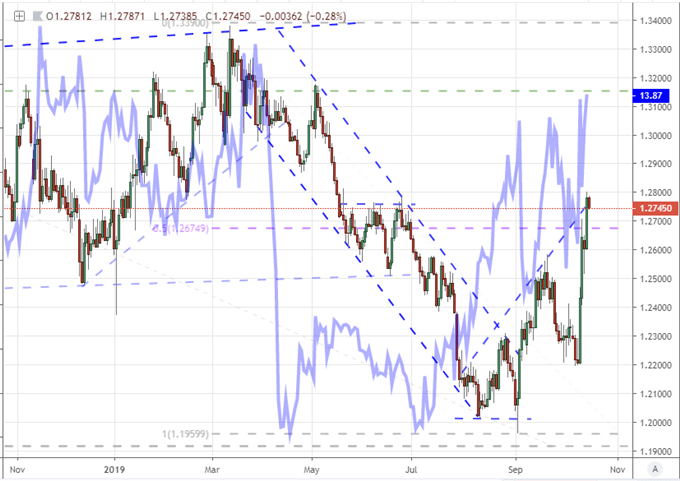