GBP/USD has spiked to fresh session highs, making a break above its 200-SMA for the first time since May following source reports that UK and EU negotiators are closing in on a draft Brexit deal. Consequently, expectations have risen that there could be a breakthrough reached ahead of the EU-UK summit later this week.

DUP Support is Still Needed, However

The report also goes on to state that any deal that can be agreed between the UK and EU will hinge on the DUP, given that their support will be crucial in raising the likelihood that a deal could be passed on parliament. Of note, the Tory Brexiteer group, the ERG, has signaled that they are willing to back a deal that the DUP supports. As such, the British Pound will remain volatile with eyes back on the DUP’s response. 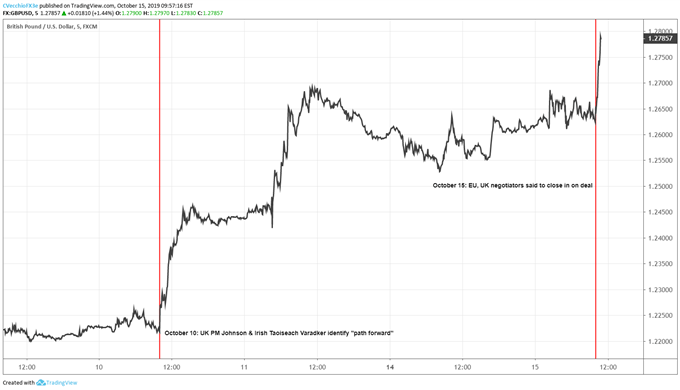 The British Pound has been on a tear the past few days as the prospect of a no-deal, hard Brexit has faded. GBP/USD rates have been particularly strong, gaining ground on nearly a straight line since the first bit of goods news was revealed on October 10. Since the October 10 joint statement by UK PM Johnson and Irish Taoiseach Varadker, GBP/USD has rallied from near 1.2220 to over 1.2780 at the time of writing.

There is a last minute EU-UK summit scheduled for October 17 to 18 in order to try and hammer out the details for the October 31 Brexit deadline. Thanks to the passage of the Benn Act at the start of September, UK parliament now has a procedure in place to prevent UK PM Johnson from forcing through a no-deal, hard Brexit.

But now that Irish Taoiseach and UK PM Johnson have identified a “path forward,” and that EU and UK negotiators are said to be closing in on a deal, it appears that the EU-UK summit will yield more clarity on the run-up to October 31.