Growth Realities Start to Weigh In on Fed Stimulus Hopes

Last week, the market was fully ready to give over to optimism. The focus on the Federal Reserve and other key central banks met the familiar promises to do whatever was necessary to keep economy chugging, translating it into a blind faith that supplement to tangible growth and reasonable rates of return would be successfully found to justify the 'perfect' pricing of the US indices. It hasn't necessarily been the message from the world's policy authorities that have changed but rather the expectations from its market participants. This air of conviction - at least for US indices - is proving tough to break even though the evidence to back up the optimism is ever found wanting. This conflict of expectations is perhaps the reasonable foundation for the performance of the Dow and S&P 500. The benchmarks both hit record highs to start the new trading week yet did so with no true follow through, the narrowest trading range since December 2017 (on the former) and tepid volume. Risk appetite without enthusiasm. 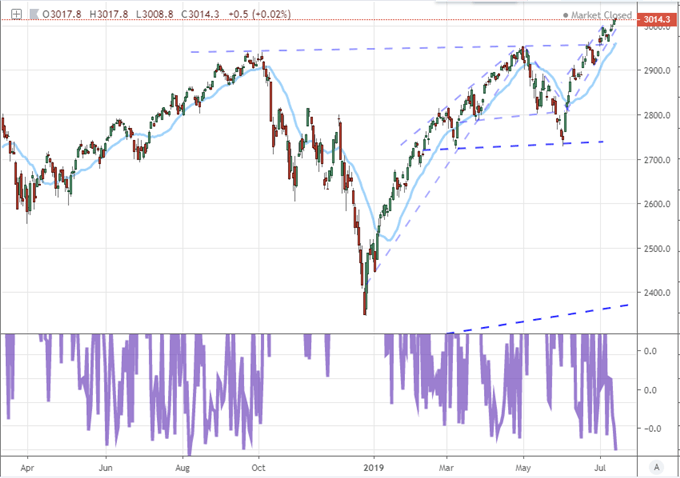 A restrained advance is nevertheless better than an active correction. That is the risk that lingers in the background as rest of world equities, emerging market assets, carry trade, sovereign yields and so many other key assets seem to diverge from the Dow's enthusiasm. One theme actively leaning against optimism to start the week was the health of the global economy. Of course, we have seen a number of data points these past weeks weaken the theme of global growth - including the developing world's manufacturing activity reports and developed world's services sector - but it is easy to slip back into a state of willful ignorance when it conflict with speculative interests. That is harder to do with official data like China's 2Q GDP update. The world's second largest economy reported a 6.2 percent of annualized GDP for the worst reading in nearly three decades, back to comparable records. There is of course particular considerations to this data - such as China's efforts to shift from export to domestic-driven growth, but it boils down to the same unmistakable economic slowdown that calls into questions such an extreme exposure to risk. 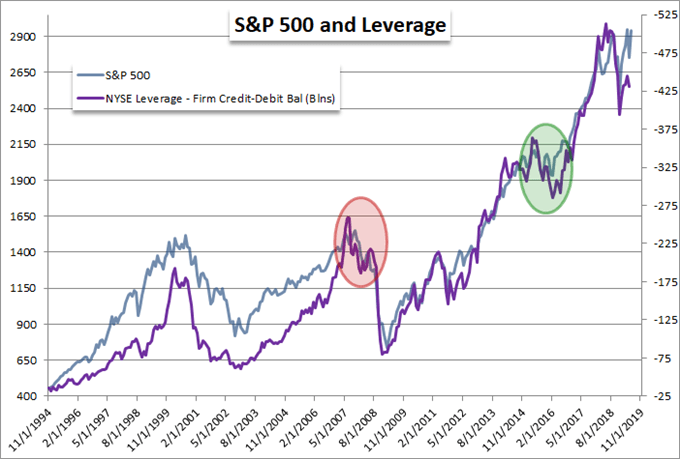 While traditional growth was more prominent on the calendar to start the new trading week, it would seem that trade wars were more deserving of speculators' principal focus. US President Donald Trump was hosting another 'Made in America' event which proved an opportunity for sound bites on the point of trade. Asked about his relationship with Chinese counterpart President Xi, he said they were still friends though that had perhaps cooled. He would also deflate some of the confidence in the USMCA deal saying it was all politics and there was a 'Plan B' in case it didn't go through.

While the next steps in the US-China fracas is the most likely front to see development through the immediate future, their is far greater risk in my view with the trade war spilling over to other countries or other assets. There were reports Monday of European officials fretting the US would announce $7 billion in tariffs against the EU in the near future in retaliation for Airbus subsidies. That would fit the slowly building drum beat of pressure against Europe with over $24 billion in European goods that the United States has suggested it could tax in an effort to balance perceived inequities. The nominee for the new European Union Presidency Ursula von der Leyen has suggested she would take a stronger hand against the US in her rally cry for European cooperation. A trade war on this front - between the two largest total developed world economies - would very likely grind already flagging global growth to a halt. And if it breaks EURUSD from its chop, I almost welcome it... 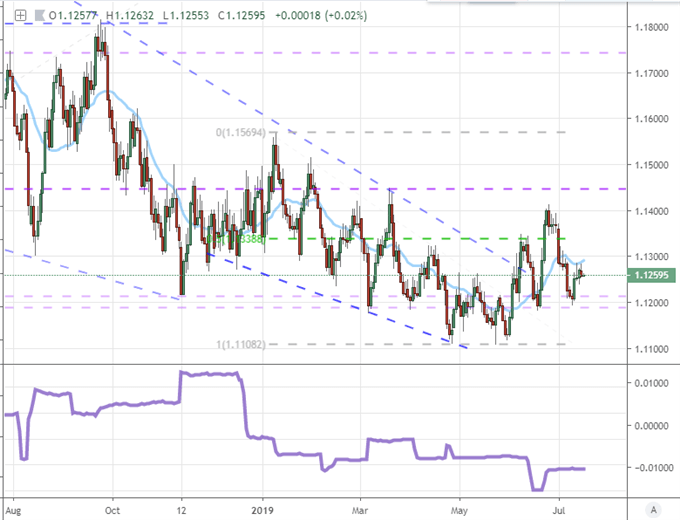 The most destabilizing risk to keep track of is the possibility that the Trump administration pursues currency devaluation - or what is perceived as currency devaluation. He has already accused key counterparts in Europe and China of artificially weakening their currencies for economic profit and has lobbied the Fed unsuccessfully to balance the equation. With last week's unconfirmed reports that the President has set aides onto the practicality of devaluing the Greenback, the risk of global financial instability seems frighteningly close at hand. 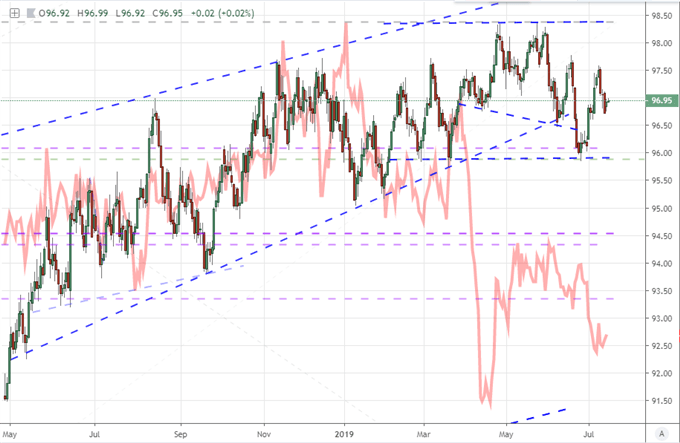 If you intend to pursue the as-yet detonated volatility in the market, set expectations accordingly for the FX majors. For the Dollar, the broad range of the past five months sets a rather straightforward picture. Despite a collapse in rate forecasts from three to four rate hikes to speculation of two to three cuts, the currency has not suffered the same hit. The US continues to drive global trade wars and neither sound benefit nor collective retaliation have resulted to contribute clear trend. If you are looking to any of the majors with high profile technical patterns, like AUDUSD, look to systemic or countercurrency influence to provide run. 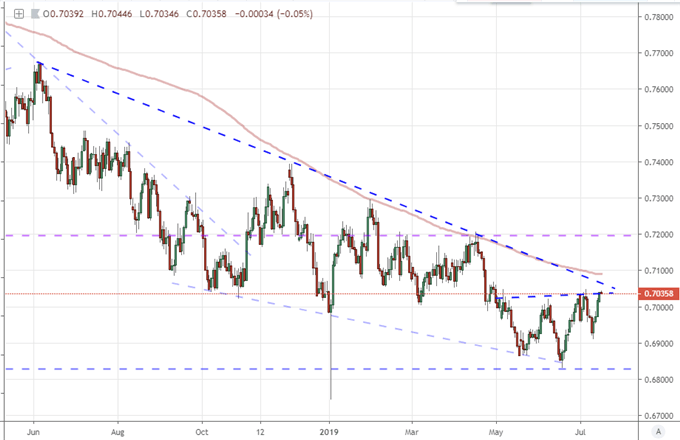 For the world's second largest currency, there isn't nearly the prevalence of overlapping themes. The threat of an EU-Italy confrontation has settled and headlines linking Salvini to Russian interests aren't proving significant enough to batter Italian markets. More traditional measures like the upcoming Eurozone investor sentiment survey and regional consumer inflation report promise little opportunity to push the focus to self-sustaining momentum. The EU Parliamentary vote on von der Leyen's candidacy for the EU Presidency is very important to the course of European politics and trade relations, but the currency is unlikely to draw great impact. The same is true of the ECB's policy intent which isn't looking to definitive update through the foreseeable future. If looking for a more loaded cross, I would look to the likes of EURJPY for a risk spark. 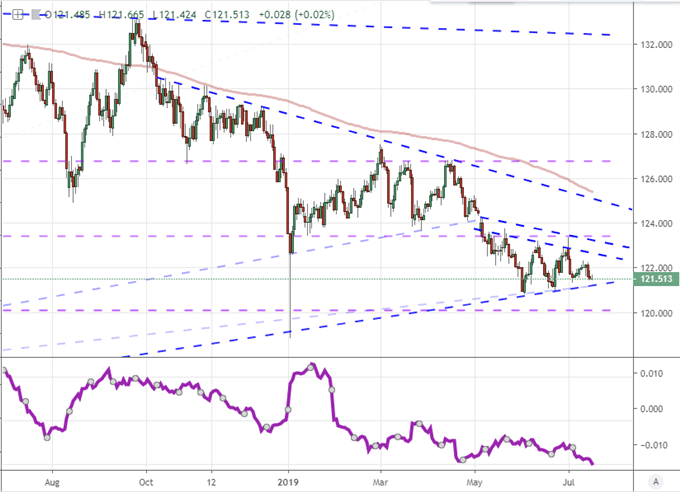 As for the British Pound, there are few majors that are more clearly bound to a single fundamental refrain. UK employment figures, regional inflation and even Bank of England update (Governor Carney remarks and bank liability survey) all fail to come up to the level of attention traders have set. The focus is on Brexit, and negotiations with the EU are on pause until the UK sorts its own political house. Reports Monday suggest the Conservative Party will have to have their votes for their next leader are due 16:00 GMT on the 22nd and the results will be reported 10:00 GMT the following day. A significant move before this next tangible step would take quite the update. 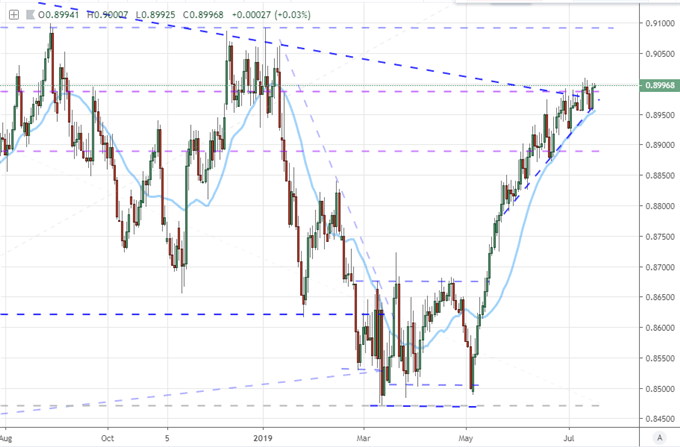 There are few markets where a build up of pressure represents anything close to reasonable potential for significant market movement. That is not the situation for gold. The precious metal has spent three weeks working its way into a range in an attempt to curb the bull trend of hte past 11 months. Considering the commodity is one of the few safe havens that can reasonably provide harbor against financial instability that includes - or is caused by - the erosion in stability of sovereign-backed assets (currencies and government bonds), it is a positioned for benefit in either one of two contrasting probabilities: a natural drop in general risk trends or the devaluation prompted by governments to avert the market implosion. I'm watching 1,380 and 1,440 closely, but it is the latter that I think holds far more potential for follow through. We discuss all of this and more in today's Trading Video. 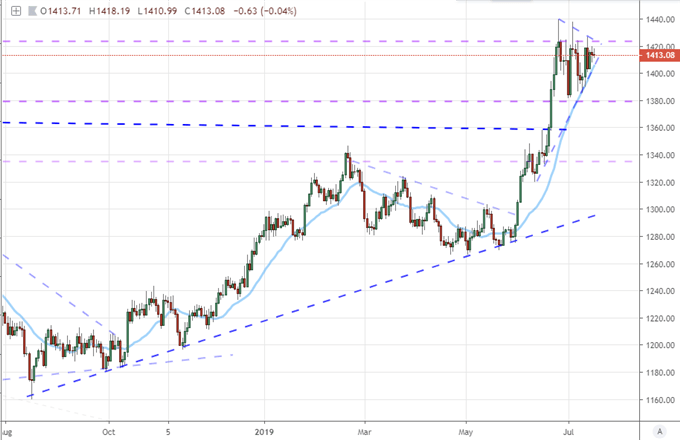