S&P 500, Dollar and Gold Show What the Key Theme Is Next Week

If we stuck to tradition, this past week's final 48 hours would have been a practice in low-liquidity creeping. Instead, there was a remarkable amount of volatility through Friday which may serve as evidence as to what is most pressing for the markets when it comes to both trend and tempo moving forward. The spark was the US June employment report. The jobless rate unexpectedly ticked up to 3.7 percent but was coming off a multi-decade low. Similar caveat goes to the average hourly earnings which was unexpectedly unchanged but still robust at 3.1 percent year-over-year growth. It was the net payrolls change that really seemed to land a serious impact. The 224,000 jobs added handily beat the 160,000 forecast and seemed to hit two key fundamental themes that have competed for the market's attention these past months: growth concerns and monetary policy. 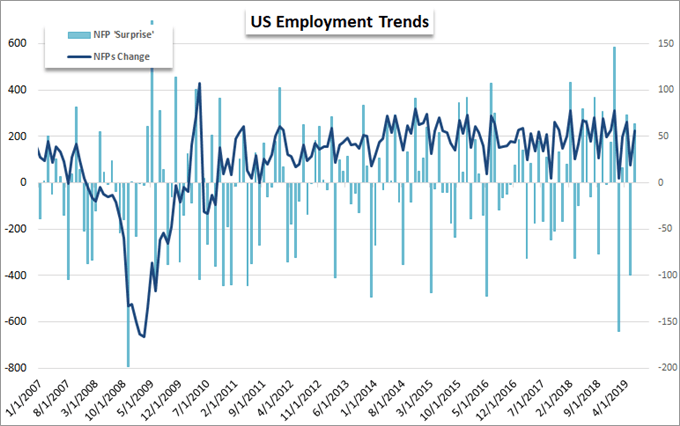 The employment report for the world's largest economy naturally has clear implications for the global assessment of economic growth. A strong net change in jobs adds a modest upgrade to an already encouraging backdrop for expansion. And yet, that isn't how the S&P 500 and other risk assets would initially interpret the news. The benchmark equity index opened to a hearty gap lower on the New York open Friday - the biggest gap down since the end of May - which contrasts a supposedly easy path of continuation given the indices are already at record highs. Instead, it seems that the data would trigger a pang of fear that the Fed won't offer as much support as the market had aggressively priced over the past few months. From a peak forecast for 74 basis points of cuts priced through year's end, the December Fed Funds futures contract is pricing in 54 bps worth of support. When a market shows greater deference for temporary - and limited - stimulus over genuine growth, traders should be mindful. 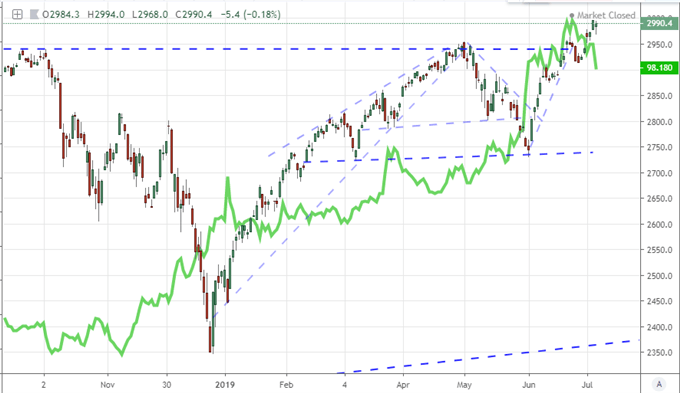 If We Are Focusing on Monetary Policy, Watch the Dollar and Loonie

A preference for - even worse, dependence on - monetary policy to carry markets higher would reflect a dangerous environment. Dependence on external factors is not genuine strength and eventually the temporary enthusiasm will pass to leave a reality of tepid growth. In this environment, it would not be wise to take complacency at face value when it comes to propping up asset prices to such rich levels relative to value. In the meantime, if monetary policy is the focal point, the Dollar may be one of the best assets to keep tabs on as a reflection of the entire market. For the Greenback, there is a notable skew in response to the Fed's policy. There was a notably controlled response to the climb in rate forecasts through the second and third quarters of 2018, but the incredible reversal in rate forecast for this largest central bank has clearly evoked a comparatively small response from the currency. With considerations of relative policy standing to the likes of the ECB and BOJ, this can be a convoluted driver for the Greenback overall.

Chart of DXY Dollar Index and Rate of Change (Daily) 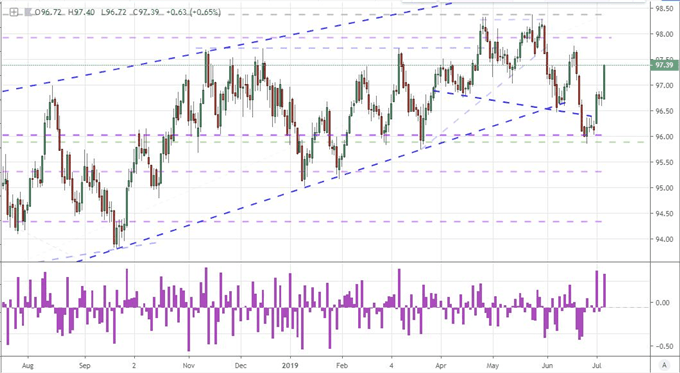 In contrast to the Dollar's conflicted fundamental response to monetary policy, gold's reference may prove far more straightforward. When it comes to rates and unorthodox monetary policy around the world, more accommodation equates to greater appeal to the 'alternative to traditional currency'. As such, whether the Fed is due to cut rates only two times in 2019 (as December FF futures suggests now) or three times doesn't materially alter the appeal of the commodity. The fact that the world's largest central bank is pursuing policy similar that of its European and Japanese counterparts only furthers a global environment where the largest sovereign assets (currency and debt) are unnaturally devalued. Where else can capital find stability outside of these most influential currencies? 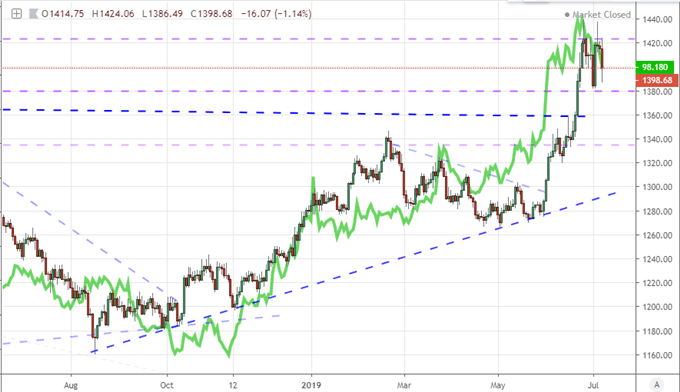 When it comes to monetary policy for the week ahead, the US has quiet a bit on tap to stir the theme back to life. The market's favorite inflation figure (CPI) will compliment the FOMC minutes and a range of Fed speeches that are on tap. That said, the top listing in this vein is undoubtedly Fed Chairman Jerome Powell's testimony before the House and Senate. Expect as much inquiry into the President's pressure on the institution as his forecasts for economic health. Yet, if you are looking for the most concentrated monetary policy event on the economic calendar for the majors for the week ahead, it is without doubt the Bank of Canada (BOC) rate decision. The market sees little chance that the central bank lower rates at this meeting, but there is a nagging forecast of a cut eventually in 2019 - as there is with nearly every major group. The Canadian jobs and manufacturing activity data this past session seem to add depth to this debate. Headline jobs in Canada dropped 2,200 position, but it was all part-time while wage jumped a whole percentage point. The Ivey manufacturing activity report offered few positive details with its drop from 55.9 to 52.4. 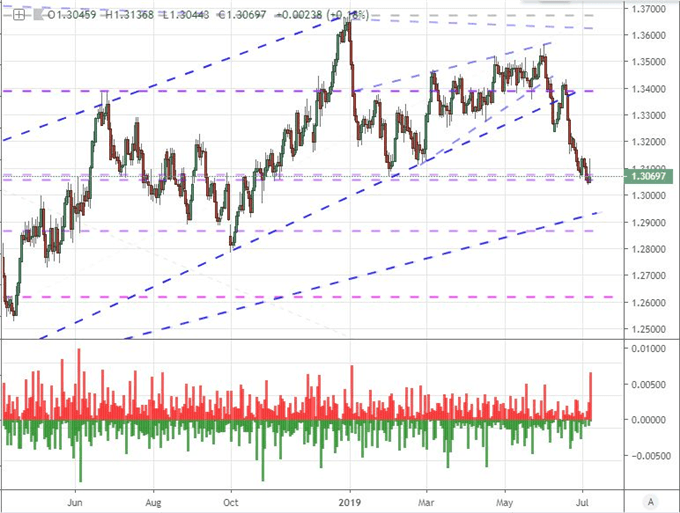 Outside the most capable listings relative to active themes, there is good reason to watch other majors for fundamental influence. The Euro was relatively steady through the past week between an extremely dovish monetary policy outlook and the favorable turn in financial risk as Italy's confrontation with the European Union seemed to de-escalate when it was reported that they would not pursue a debt procedures against the spendthrift country. Yet, if we move beyond these dramatic headlines, the more mundane updates on health offers unmistakable reason for pause. There is an unmistakable cooling in economic health for Europe. We were reminded of that fact this past session when Germany reported factory orders dropped 2.2 percent this past month (for an -8.6 percent pace year-over-year). In the weak ahead, we have German trade and industrial production, Euro-area investor sentiment, the Finance Ministers meeting and ECB minutes.

The Sterling offers the exact contrast to its shared counterpart. Where the Euro's allegiance for market influence is unclear thanks to a wave of important themes, the Pound has one focus: Brexit. Despite the one-track mind, the course of the divorce seems to be more and more convoluted with each week. On Friday this past week, front runner to take over the Conservative Party leadership from Theresa May - and therefore the next Prime Minister - Boris Johnson said the country would be ready for a no-deal Brexit by the October 31st deadline if they had to resort to the option. Meanwhile, there are reports MPs are attempting to legally gain control of Parliament so they can preclude such divisive outcome, but it is all being fought out with little anticipated time left for genuine negotiation between the UK and EU. The outcome is up in the air but uncertainty is risk. As such, the Pound continues its plunge versus major counterparts with little regard to technical levels. That said, there is far less potential for mounting a renewed bear trend from here than sparking a bullish reversal. We discuss all of this and more in this weekend Trading Video. 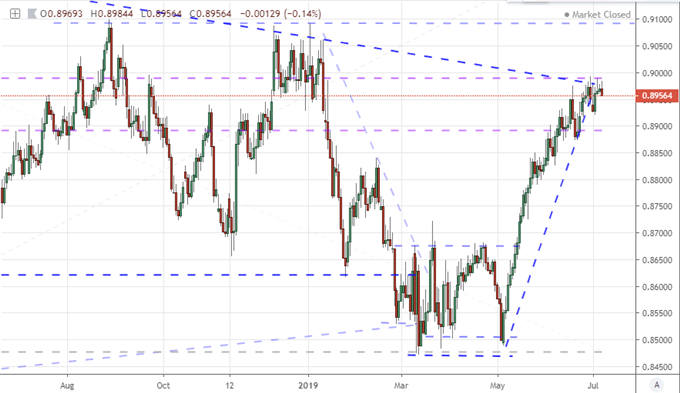