Good Will in Trade War Progress Needs Confirmation to Continue

The reports Wednesday that the Trump administration seemed to be softening its position on conducting global trade wars earned an unmistakable 'risk on' response from the financial system that continued into this past session. The S&P 500 led the major US indices in another bullish gap on the open with a little more follow through on which bulls could rest their confidence. US equities weren't the only benefactor from the sentiment as global stock markets, carry trade and junk bonds all staged gains of their own. This climb was not universal, however, and the disparity in relative performance between US and global markets (VEU) as well as the systemic divergence to a growth-dependent measure such as global government yields should maintain raise a serious concern over the true capacity of risk trends. Nevertheless, short-term salves can draw trader interest for discrete opportunities. 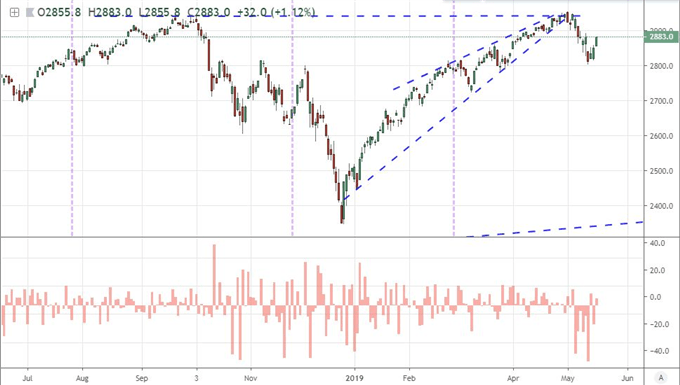 On the other hand, where the long-term bias remains in favor of complacency-primed risk appetite; there eventually needs to be confirmation of recent rumors of improved trade relations if we are to expect a more robust trend against a range of systemic concerns. The most effective source of relief in the latter half of this week was founded through reports that President Trump was ready to delay a decision on auto tariffs when the 90-day review period came to a close on the Commerce Department's Section 232 review. The assurances reportedly came from senior administration officials, but we have yet to see Trump state or tweet as much himself. There have been many instances in the recent past where certain officials from different departments, or even from the White House itself, have said one thing only to be contradicted by the President's actions later. In risk-reward terms, there is limited upside potential from simply meeting expectations of averting a further dive into crisis. Alternatively, another unfavorable turn for trade relationships could lead to another sharp tumble on the open next Monday. 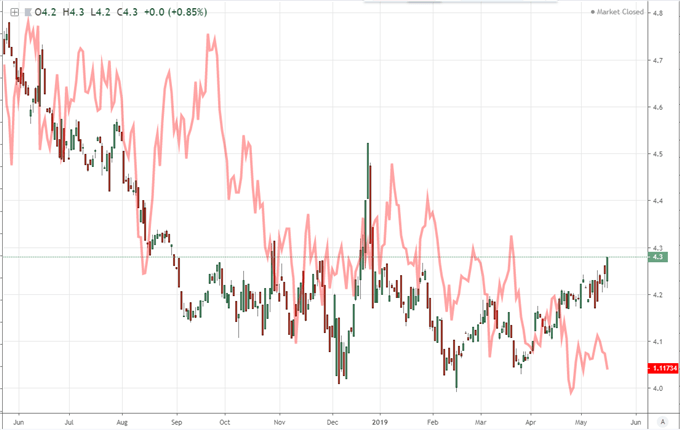 Another trade headline that generated a certain degree of enthusiasm which has yet to secure the commitment of the White House are the reports that the US will remove quotas on steel and aluminum tariffs against its neighbors so as to appease Congress and move ahead with the USMCA. As targeted as that promise seems, neither the Canadian Dollar nor the Mexican Peso managed to extend their initial gains into extended Thursday climb. It is difficult to establish how much discount remains to this North American trade impasse given the recovery mounted after the agreement in principle among the negotiation teams was met a few months prior. That said, if there is limited charge for the CAD and MXN, there will ultimately be measured response from risk assets.

Rather Than Enjoy the Pause in the US-China Trade War Pause, An Executive Order Ratchets the Tension

As we gauge our level of confidence in unconfirmed reports of a trade relationship breakthrough to potentially avert a skirmish between the United States and its largest developed counterparts (Europe and Japan) on autos and a technical push to get the USMCA across the finish line, it is worth remembering that principal trade risk remains unresolved. Following the United States' upgrade to the tariffs it is levying on $200 billion in Chinese imports from 10 to 25 percent last week and China's retaliation for a similar rate on $60 billion in US goods, we have not seen an actual improvement in the tumultuous weather between them. In fact, conditions have worsened through ancillary action. A little earlier this week, the US President signed an executive order that claimed a national emergency in protecting information and communications technology. It wasn't difficult to discern this was a move primarily targeted China.

With a clock ticking in the background on three weeks until the United States will presumably expand its import taxes on China to include another $325 billion in goods, it is difficult to miss what is at stake. Treasury Secretary Mnuchin and other trade delegates have not committed to the specific timing for a next meeting which makes the clock hammer even louder. One of the immediate victims of the new executive order is Huawei. Following the extradition of the company's CFO, the business threat to a Chinese conglomerate that earned over $100 billion in revenue registers provocation - a mood that contrasts the rumors we received on the other fronts. According to US Commerce Secretary Wilbur Ross a 'ban' on the large company will go into effect today. It is very unlikely that this news will encourage Chinese authorities to compromise and hasten a resolution to the more-than-year-long trade war. Keeping tabs on the Shanghai Composite is worthwhile, as is a regular check in on the USDCNH. If the pair closes in on 7.000, something serious is unfolding. 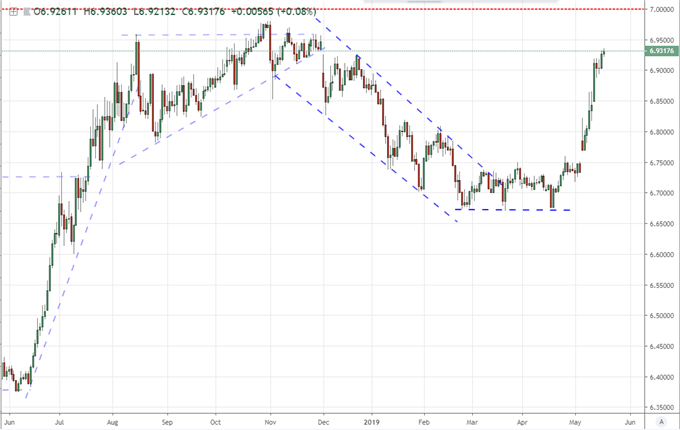 Elsewhere across the markets there are other systemic fundamental issues playing out. Recession worries are continuously teased whether through the Bank of Canada's warnings or the US Treasury yield curve inversion. Monetary policy is drawn out only when there is something broken, and then the groups show their impotent hands. Perhaps the most ominous and undervalued thematic risk of late are political risks. The steadily climb in tensions between the US and Iran is unmistakable. Even the distracted crude oil market seemed to fall in line this past session with gains above $63, though this is not truly indicative of what is at stake. If another 'hot war' is on the horizon, these markets are far from reasonably accounting for the 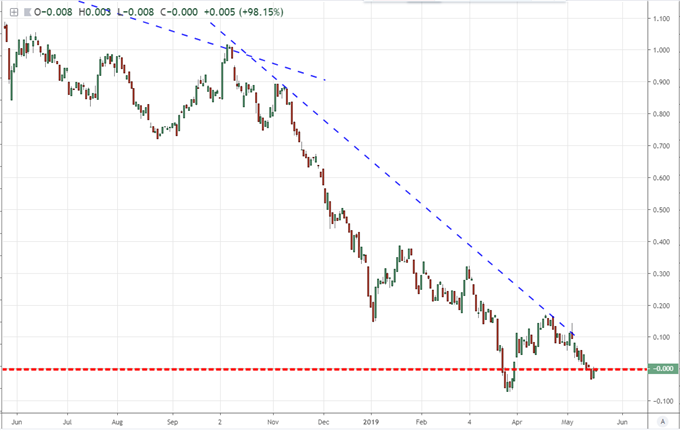 In the FX market, it isn't difficult to establish what is throttling the Sterling. This past session, the UK Government wrapped talks with the opposition Labour party with little in the way of tangible progress towards breaking the impasse on the country's Brexit stance. What did seem to gain traction however is a firmer commitment from Prime Minister May to step down next month. The Chair of the 1922 Committee indicated that an agreement for her resignation had been reached. Of course, that does little to move forward progress on the divorce from the EU, but it certainly adds another layer of uncertainty. In turn, the British Pound registered its 9th consecutive daily slide on an equally-weighted index to match the longest tumble since 2012. Traders should eye pairs like GBPUSD, EURGBP and GBPJPY cautiously. From the Euro, we had trade figures from the Eurozone and Italy impress this past session. However, concerns over Italy's impending pressure on the regional economy's budget and the ECB airing concerns over a fragmented banking system along with the need for a non-sovereign debt safe haven adds a material weight to the Euro. 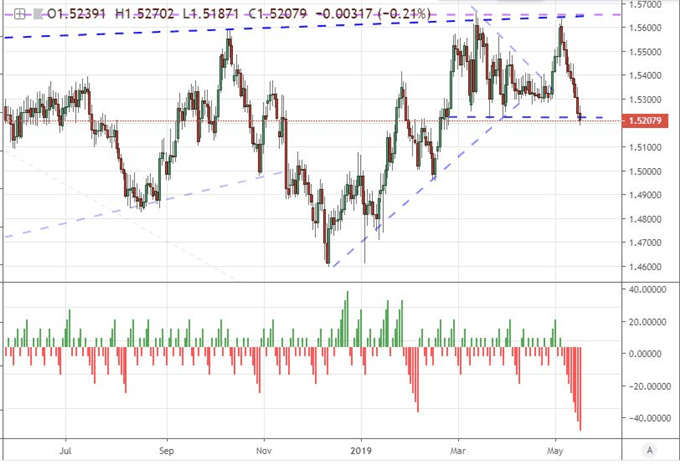 As the Yen loses ground on passive risk appetite, the Pound drops on Brexit headlines and the Euro drifts lower in anticipation of heavier fundamental waves ahead; there is one currency that benefits meaningfully: the Dollar. While there was data on tap this past session, the concerns over growth, trade and monetary policy paint an unflattering picture. Thankfully for bulls, the collective losses of the Greenback's major counterparts can effectively leverage the single currency higher. While a universal alternative status can be an effective lift, it is not a reliable one. As soon as the anti-currency winds die down, the Dollar can find itself right back in a holding pattern. Perhaps we can find some more effective, domestic issues to follow. The University of Michigan's consumer sentiment survey due Friday is a good reading for key concerns like trade wars, growth fears and political risks all in one package. We discuss all of this and more in today's Trading Video.