Can Dow, AUDUSD Stage a Recovery or is This a Pregnant Trade War Pause

Following China's turn to retaliation in its escalating trade war with the United States Tuesday - and a distinct market response via risk trends - the markets were left to acclimate to the new level of tension in the world. There was no let up in action from the two sides even if their commentary may have leveled out somewhat. In the aftermath of his tariff hike on $200 billion of Chinese imports from a 10 percent to 25 percent rate Friday and the warning that additional $325 billion in goods (more than the balance) was at risk in the foreseeable future, President Trump softened his language somewhat in social media and in televised statements. He remarked that he had a great relationship with his counterpart President Xi and that they could strike a deal as soon as 'tomorrow' should the right agreements be made.

It would be a stretch to suggest these hedged sentiments are the source of the market's balance Tuesday as we have seen wild oscillations in the administration's stance over the past months that seems to be well timed to the rise and fall in benchmark equity indices. For China's part, the aftermath of the response with a 25 percent tax hike on $60 billion in US imports was followed by some brief, local statements for the public that suggested leadership would not back down. The only definitive event on the timeline is the G20 meeting followed by a 'three to four weeks' in which the US stated it will move on the additional goods. Instead, we need to watch the headlines and reports that key officials responsible for the negotiations (Lighthizer, Mnuchin, He) are due to meet again. 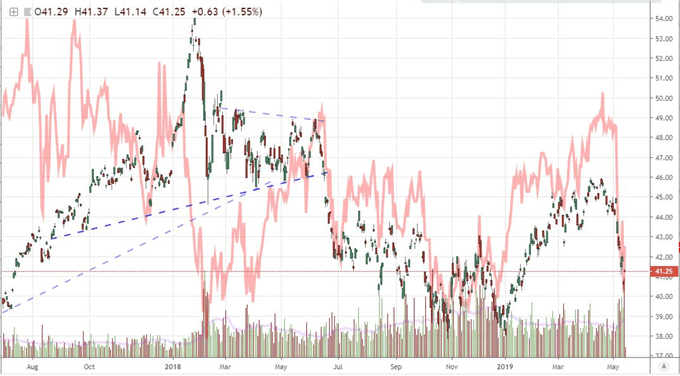 With a temporary cap in the escalation of actions and rhetoric to the trade wars, it was difficult to miss the bounce in 'risk-leaning' assets this past session. The S&P 500 and Dow managed meaningful bullish gaps on the open, but the move looked more of a counterbalance to the biggest drop to start the day for the latter in a decade. There is little dispute that sentiment itself has paused in its tumble. Global equities halted their drop, the EEM emerging market ETF gapped higher (though offered no material follow through) and Yen crosses steadied after clearing support Monday. Yet, as wide as the balance seems, there is not much in the way of conviction to draw from the effort. There is a stark difference between a pause in a prevailing trend or the return to true commitment. 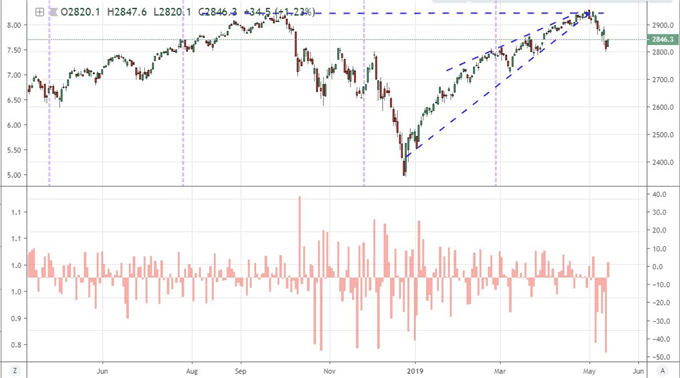 We can see this conflict readily in the S&P 500 or Dow. Both indices spent the first four months of the year climbing with the former actually earning a record high for the effort. Yet, that advance was itself a reversal of the losses suffered in the fourth quarter and the ability to transition to recovery back to genuine extension of trend once record highs were clear was always in doubt. That is especially true in the comparison of standings between US indices and most other risk benchmarks. That isn't to say however that the previous few weeks' slide is a full commitment to a long-overdue swing in the bears' favor. Commitment remains the missing quality of the market over fundamental charge or technical bearing. 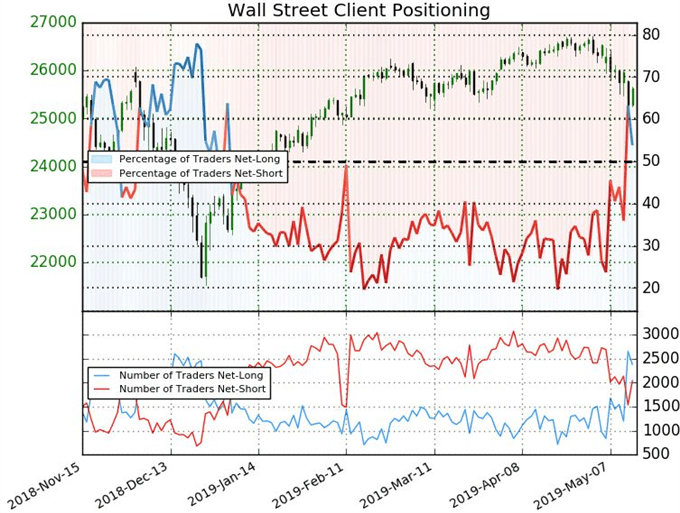 While the standoff between the US and China remains the most potent, standing risk to the global financial markets, it isn't the only spark that traders will need to keep track of when gauging the changing winds across the world. It warrants constant reminding due to the threat it poses to financial stability and growth, but President Trump is due to make a decision on whether or not to place tariffs on autos and auto parts this coming Saturday. While the typical political call to keep pressure on without adding too much complication would be to take the option for an 180 day extension, however, traders should recognize the unorthodoxy of the current US administration by now and not hold unnecessary risk. The fallout from shifting the trade war to developed world counterparts would be potentially severe, and the payoff from pressing risk exposure for the opposite outcome minimal. Consider that lopsided equation.

Meanwhile, political risks are starting to crop up regularly in global financial headlines. The threat that a growing impeachment fight between the Legislative and Executive branch in the United States likely keeps the infrastructure spending program that could charge US growth on ice. The advance of nationalism into the EU Parliamentary election and questions of a functional government in the UK are targeted concerns, but the growing tensions between the US and Iran have more international implications. The nuclear treaty is quickly falling apart while the energy market is under pressure as efforts at sabotage on oil tankers off the UAE coast and drone attacks on Saudi pipelines seems to raise the threat of higher energy prices to threaten already wavering growth - though crude prices have responded as expected.

Growth trends will take a more substantial fundamental role through the immediate future. The trade war's economic impact is a constant, but targeted event risk like the Japanese economic sentiment survey (Eco Watchers) will offer acute perspective especially with its disappointing turn. Ahead, China's April economic figures will give a comprehensive overview which the market will consume with its customary grain of salt and the Eurozone will release its preliminary (for most second round) GDP updates for the second quarter. Another theme of merit - particularly for the Fed - is monetary policy. When tensions are rising, questions over the world's largest central banks to put out fires is stress tested. No major central bank looks ready, but the Fed arguably has the largest capacity. That said, import and export inflation pressures eased this past session while a few FOMC members argued that there was no legitimate case for a rate cut - despite the market's speculation of just that before year's end. I am particularly interested in George's comments that state unnecessary rate cuts could lead to market bubbles and eventually contribute to a recession further down the road.

As we await the market's decision on certain fundamental themes, there are certain markets that are more likely to chop and those that see better potential for establishing a trend with the right push. In the former case, the EURUSD has every reason to struggle for commitment as has been the case for some weeks now. Beyond the Greenback's struggles with its safe haven, carry trade, relative growth, trade war instigator status; the Euro is itself pushing off its decision on a clear course. There are issues through monetary policy and internal political strife all its own (take a look at the Italian-German yield spread), but the real issue is anticipation for the EU Parliamentary elections which are due to start May 23rd. The rise of anti-EU - and thereby anti-Euro - interests is unmistakable. Transpose that Euro anchor onto EURGBP where the long-standing Brexit uncertainty is keeping the Pound from any material trend development and we have one of the more overburdened crosses. This pair has advanced 7 straight trading days which matches the longest climb since January 2013 and retail traders are clearly confident in the weight of the range resistance we are now coming into contact with as their short interest has jump to the highest levels in many months. 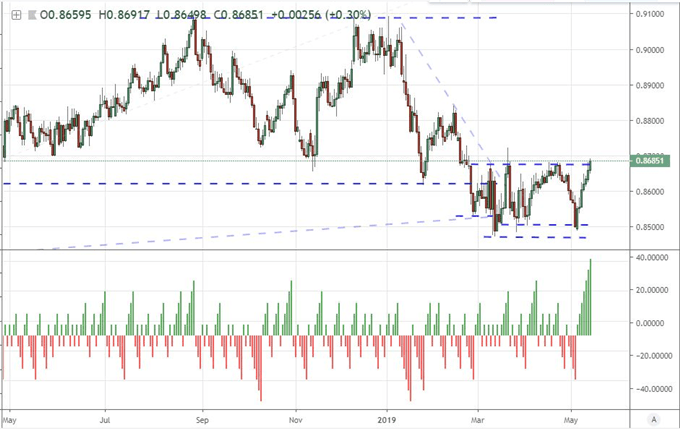 In contrast to the more reliable extension of uncertainty due to fundamental overload for the likes of EURUSD and EURBP, crude oil's lack of bearing is not as dependable. The demand side of the supply-demand equation is far more important still with growth forecasts the principal motivator with trade wars a threat to that existential question. Yet, supply-side issues like the Iran tensions could start to tip the balance itself. There is more reason to believe that AUDUSD is at risk of converting potential into kinetic energy.

There is Aussie-based event risk, but the real application of force is through the currency's and pair's exposure to the US-China trade war. Where China has a material influence over curbing the damage from the economic conflict, the Aussie Dollar has no such offset. Watch AUDUSD as it trades at the lowest levels in three years and retail traders grow disturbingly confident of a reversal. As for gold, the one-sided lean is not as extreme nor is the speculative view as clear. The precious metal's wedge break higher however could readily find fuel should the trade war revive risk aversion. There are few true havens that represent an alternative to the traditional currencies and the markets they represent. This makes gold a unique hedge and barometer. We discuss all of this and more in today's Trading Video. 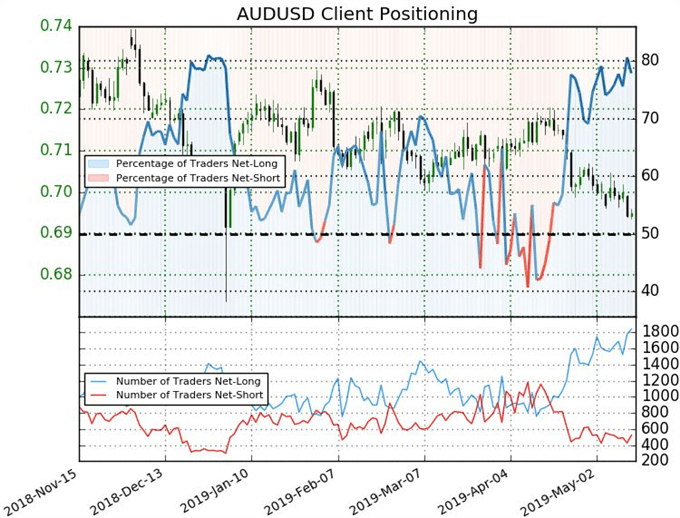