The British Pound was the worst-performing major on Tuesday, extending declines from last week on increasing doubts that UK Prime Minister Theresa May can successfully negotiate a Brexit deal with the Opposition Labour Party. This has also lead to extensive weakness in GBP/JPY after clearing support, as anticipated.

Over the past 24 hours, reports crossed the wires that senior members from her own Conservatives have pressured her to end talks. There is also increasing pressure for her to step down, which could risk delaying Brexit even further. Ms May said that she intends to put forward a Brexit deal to Parliament during the first week of June. Opposition Leader Jeremy Corbyn said he would not back it without an agreement.

On the daily chart below, GBP/USD finds itself approaching key support which is a range between 1.2866 and 1.2888. This area paused the downtrend back in late April, causing a retracement to the former rising trend line from December (pink-dotted line below). Since then, the pair traded about 2% lower. If support holds, we may get another retest of resistance around 1.3001. 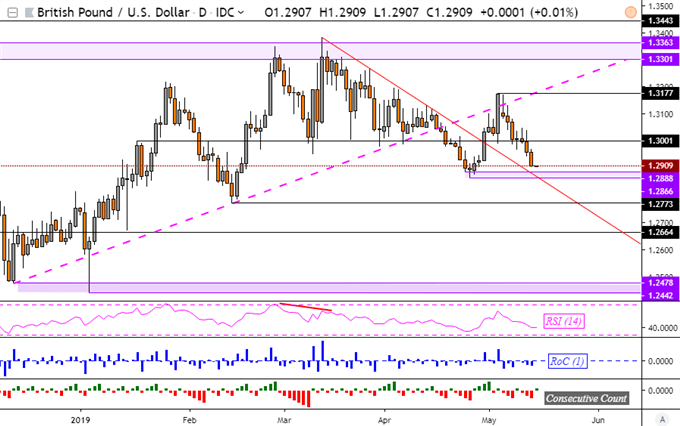 Meanwhile, both the anti-risk Japanese Yen and Swiss Franc also underperformed. They pulled back alongside cautious gains in global equities as fears of a US-China traded war receded. The Euro Stoxx 50 and S&P 500 ended the day 1.31 percent and 0.80 percent higher respectively. The US Dollar aimed narrowly higher as well, following similar progress in local front-end government bond yields.

S&P 500 futures are pointing higher, suggesting that Asia Pacific markets may build on the gains seen on Wall Street. This risks pressuring the Japanese Yen lower while supporting the sentiment-linked Australian Dollar. Though the latter will face Australian wage price index data, and AUD/USD may rise on it.

Following the latest RBA rate decision, more emphasis has been placed on employment-related data for where policymakers may take benchmark lending rates next. There may be an upside surprise given recent trends in local economic data which have been tending to outperform relative to economists’ expectations.

Meanwhile, on the next chart below, market positioning, while still net-long, is offering a mixed AUD/USD trading bias. Since April 18, when traders turned net-long, AUD/USD prices fell 3.1%. If you would like to learn more about using this in your market analysis, tune in for my webinars each week on Wednesdays at 00:00 GMT. 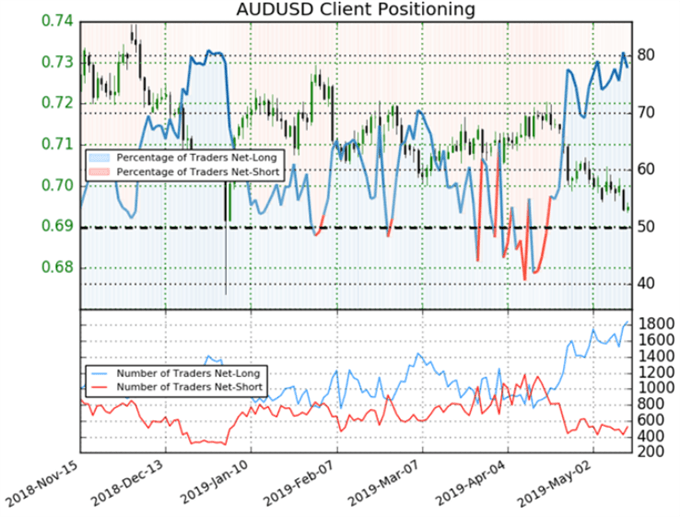