The tension around the US-China trade wars has been built steadily through the week, and now we are coming to a crossroads for one of the greatest encumbrances for global growth and sentiment we've experienced in decades. At the end of last week, it seemed the world was on course for a breakthrough in the trade dispute between the two largest economies in the world. Official and unofficial sources on both sides of the table were leaking optimistic remarks suggesting a compromise was close to being struck. Then, on Sunday, US President Donald Trump tweeted that China was reversing course on its commitments and that a new ultimatum was set for Friday morning at 12:01 AM Eastern Time. If the Eastern giant's leadership would not reverse course, the US would raise the tariff rate on the $200 billion in Chinese goods already being taxed from 10 percent to 25 percent and the remaining $325 billion in "untaxed" imports could also be slapped with the same crushing tab. Since then, we have seen rhetoric oscillate wildly at times, but the general course seems towards a game of chicken from which neither side seems willing to back down. President Trump has stated openly that the fallout is the result of China's backtracking. His remarks earlier Thursday that Chinese President Xi sent him a "beautiful letter" suggests progress, but Chinese state-run media made clear the country's position was the hard line. 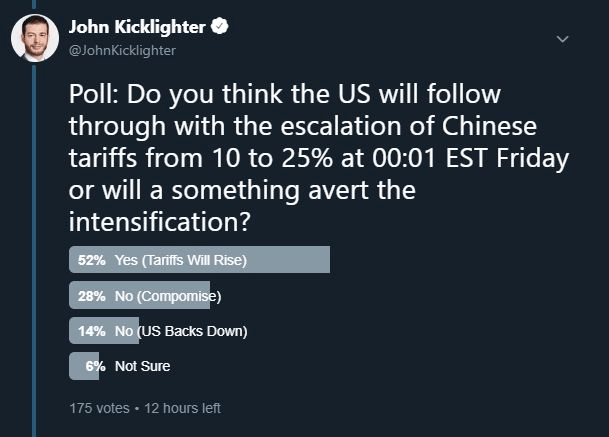 Raising the tab on trade wars will carry a significant economic and financial impact, but this isn't exactly new territory for which the world would be venturing. The real question is at what point does escalation capsize the seeming unending enthusiasm of the speculative rank. Though the language surrounding negotiations between the two powerhouses has changed abruptly in the past week, a jump in the tax rate for $200 billion in goods would not be much of a surprise. That said, the shaky hold of complacency over the financial system could prove unbearable with the market already in a tentative state of retreat. If the White House follows through on the threat to spread the higher rate of tariffs to all of the imports from China, the burden would equate to a nearly 650 percent increase in the burden. It would be hard to overlook the pain this would inflict. And, even if the markets managed to shrug off the threat at first, the unmistakable ignorance would hit critical speculative mass of its own. The greatest risk in my view remains a scenario where the end of the US-China trade war is finally spelled out and the market still collapses under its own excessive weight. As we pass the milestone on the most overt front on the trade war, a market participant would do well to remember this is not the only beachhead for promoting growth at the expense of others. Among various other threats, President Trump is due to decide on whether to apply duty to all auto imports or not by May 18th. How much fundamental weight can the world stand? 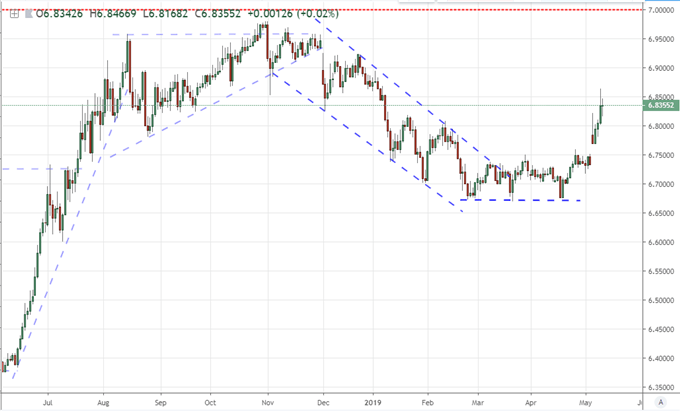 As we weigh the market's appreciation for the fundamental tide, it is difficult to miss the threat growing across the speculative landscape. The S&P 500 has struggled to truly ignite, but the progression of the benchmark's reversal is impossible to miss. The reversal of rising wedge immediately after hitting a record high has been followed by four consecutive gaps lower. And, this hasn't be an isolated case of faltering sentiment. Rest-of-world equities have dropped lower, emerging markets have suffered sizable dives lower and even the disconnected carry trade (Yen crosses) is following suit. A potential sea change is in the air if only there is proper motivation - or the strategic lack of interference. Trade wars are not the only source of unease across the financial system. Economic forecasts are starting to drop again after the temporary boost following the US GDP report and there is temporary distraction from the shortcomings of monetary policy. Political risks are gaining a head of steam on the other hand. Aside from trade diplomacy and issues like Brexit, the unity of the Euro-area has deteriorated againstpressure from Italy, a few countries are in the midst of elections (South Africa, India, Australia) and US House Leader has said the country is facing a constitutional crisis. These are not the factors that promote stability. 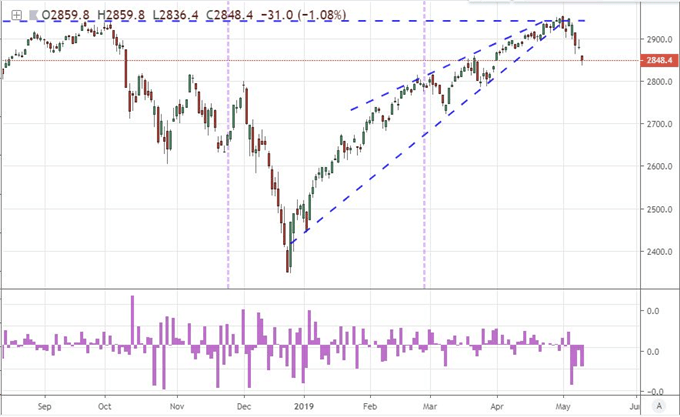 As the world struggles with stability issues, where does capital flow and what currency stands to benefit. Financial stability is a motivation very similar in impact to liquidity risk. In the event of utter crisis, there really is only one viable outlet: the US Dollar. That is not because the Greenback itself is just the most liquid currency in the world (it is), rather the world would be seeking out the safety of US Treasuries and money markets which are sought as much for their familiarity as their financial depth. This fundamental theme will likely override most other distractions for the time being. The individual strength of the US economy relative to the rest of the world has few immediate milestones for which it can distract itself. As for monetary policy, this past session's upstream inflation reports (PPI) showed the tap is running steady; but the market's favored consumer inflation (CPI) report is unlikely to stir any deeper intent even with a significant surprise Friday. At the moment, trade war blowback and political risks are the principal concerns; and traders would do well establish the hierarchy of concerns when it comes to the Dollar's next move. 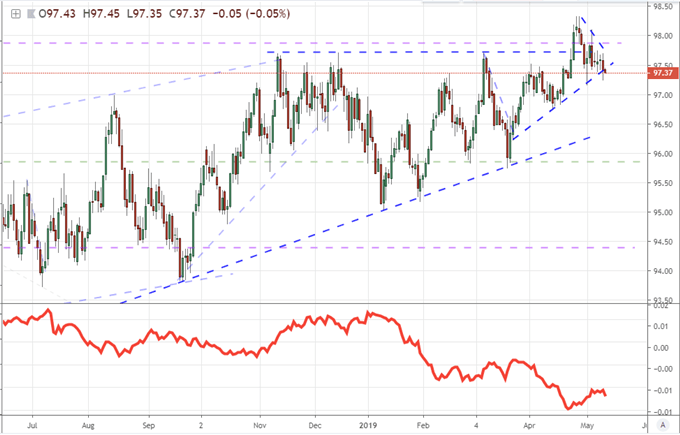 'Other' Fundamental Charges for the Pound and Canadian Dollar

Looking outside the enormity and ambiguity of trade wars, there are certain areas of the FX market that could find some meaningful distractions of their own on which to generate volatility. From the world's second most liquid currency, there is the threat the US will expand its trade war to include retaliations for Boeing and Harley-Davidson lost revenue and the far greater impact a global auto tariff from the US would have on European manufacturers. Yet, we should also keep tabs on internal strife. Following the EU's downgrade of economic forecasts, Italy has made clear it intends to offset the burden by increasing spending, running afoul of debt limits. The fundamental impact for the Pound is far less amorphous. Friday brings 1Q UK GDP (sign up here to join the live webinar coverage of the event) along with monthly readings for trade balance, industrial production and construction output. At least the growth figure has proven itself more than capable of generating serious volatility, so traders should be on guard. That said, don't hold your breath for trend development which requires the allowance of Brexit. 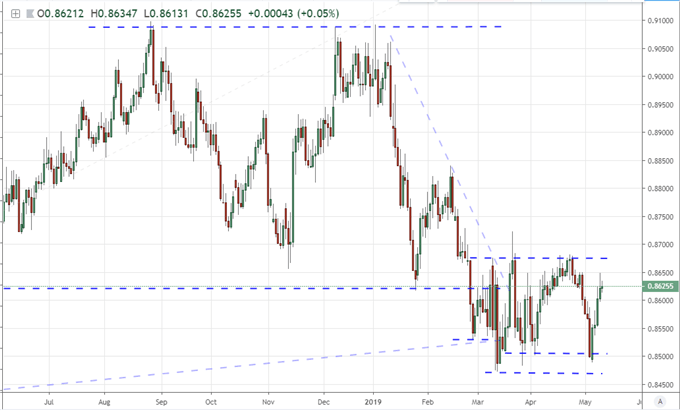 If you are looking for the most focused, scheduled event risk amongst the 'commodity bloc'; the Canadian Dollar is at the top of the list. Following the stubborn trade deficit figure from Canada this past session, we saw very little movement from either USDCAD or an equally-weighted Loonie index. That is unlikely to remain the case if there is a significant deviation from expectations for April employment figures. That indicator has a history of charging volatility. For the Australian and New Zealand Dollars, the attention is moving away from anticipation for a specific event to the aftermath of this week's rate decisions. The RBA held rates unchanged, but that proved a surprise for the Aussie Dollar and capped market intent. The RBNZ's rate cut was expected which gave greater emphasis to the 'neutral' bearing for forecasts. The hold from a previously tumbling Kiwi may stage an interesting next leg. We look at all of this and more in today's Trading Video. 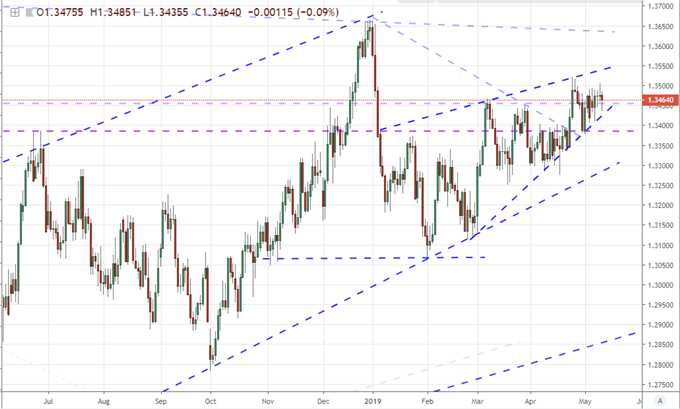