S&P 500 and Dollar Trip Crossing the Breakout Finish Line, What to Watch Now?

Do you trade on fundamental themes or event risk? See what live events we will cover on DailyFX in the week ahead (including Eurozone GDP, the Fed and BOE rate decisions) as well as our regular webinar series meant to help you hone your trading.

A Notable Lack of Lift for a S&P 500 Record High, And Now Google's Miss

We opened the new trading week with enough overbearing anticipation that the lack of progress on a few crucial technical breaks didn't even come off as a serious surprise for the observant trader. Perched provocatively at a record high, the S&P 500 made the weakest possible effort to journey the few points necessary to secure an intraday all-time-high. During more robust periods of speculative enthusiasm or at less-dramatic levels of technical influence, such a breach would have been occasion for an immediate rush of follow through. Triggering an avalanche of preset entry orders at fresh highs (or stops on ill-fated shorts) is often a sign of a more robust participation and intent. Its absence only adds to the caution that has kept the markets on uneven keel. Anticipation for Wednesday's FOMC (Federal Open Market Committee) decision will increasingly pull on these indices, but the cracks in conviction will be probed well before the central bank's announcement will give the market's leave to run. After the close Monday, Google's parent - Alphabet - reported a miss on its earnings with $9.50 per share against $10.10 expected with a shortfall on revenue to the tune of half a billion dollars. While the tech sector hasn't been the only favorable contributing wind to the equity market, it has been the most prominent. If the Nasdaq starts to retreat, broader US indices may not be far behind. And, if US stocks falter, it is a long drop back down to meet the relative performance for the rest of the speculative market. 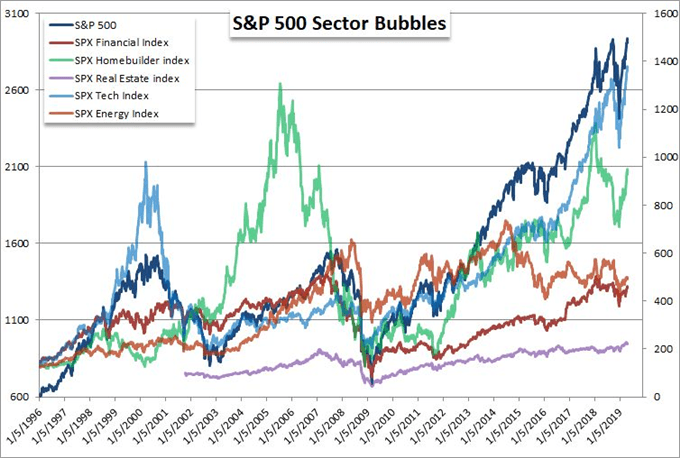 Through the upcoming session, we will receive the last, influential run of US earnings reports. The post-close Apple numbers will be another uniquely high-profile release with greater pull than most, but the season's performance thus far suggests a weaker reading may pose a greater than than beat could as an opportunity. Other key firms' reports to watch for an overview of the financial system beyond their own respective performance are: Pfizer, Eli Lilly and Merck with healthcare one of the worst performing sectors; General Election as a blue-chip of the old order; and General Motors given the importance of trade wars. Another theme that traders would do well to keep track of as the week wears on is the general state of growth. We have had better-than-expected reports from the 1Q GDP figures for the US and China, but concern over a troubled economic forecast is far from cast aside. Europe will release many of its key 1Q growth figures Tuesday and the April PMIs from China will track progress on a very tepid uptick that was warmed by Bloomberg's economist survey for the country. Two other emerging markets due to report their own economies' performance figures that you should keep tabs on for systemic purposes are Mexico and Hong Kong (Tuesday and Thursday respectively). 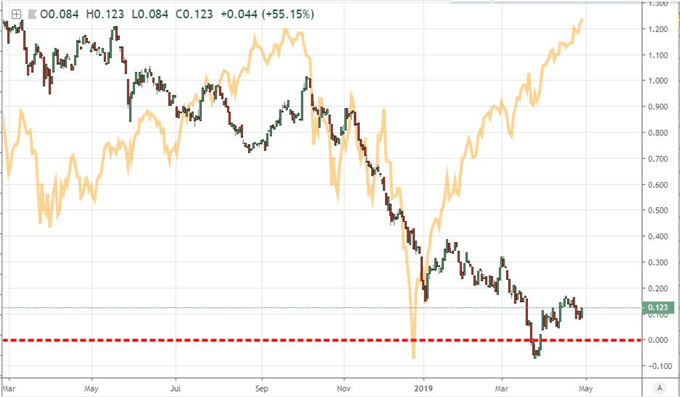 EURUSD Returns to Its Hard-Won 1.1200 Breakpoint as EZ GDP and a FOMC Decision Approach

Similar to the US indices' achievement this past week, the Dollar's clearance of two-year highs drew considerable attention. It just didn't draw in a steady flow of bids. The Greenback started off this week with the same lack of commitment and raw speculative appetite as the more risk-defined assets. We started this week off with interesting and somewhat conflicting data out of the United States. Personal spending among the county's powerful consumer base soundly beat expectations with a robust 0.9 percent growth through the past month. That certainly helps feed into the notion that first quarter growth would not end up a fluke. Then again, the Fed's favorite inflation data derived from the same data offered a disappointing 1.5 percent clip that will reinforce the probability that the Fed is done with its hawkish cycle and may even cut if pressure continues to build for the markets. The probability of a 25 basis point cut from the group by year's end still stands at about 65 percent. That doesn't seem to trouble the Dollar however. We have seen rate forecasts submerged the past six months, so I would not hang too much interest in the Greenback's next move on simple monetary policy intent (with the exception of any Fed surprises on Wednesday). Whether or not EURUSD holds or retakes 1.1200 resistance though may draw more and more determination from the fortunes of the USD's primary counterparts and whether a top liquidity counterpart is necessary. 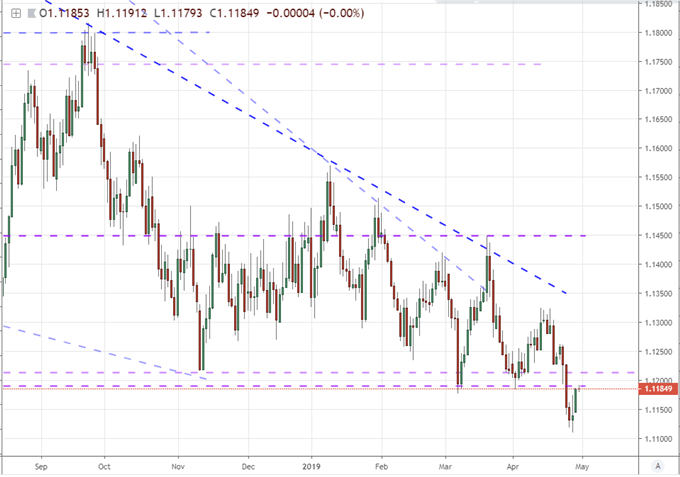 On the other side of the proverbial coin on the benchmark currency pair, the Euro touts greater influence over the most liquid pair; but the shared currency itself refuses to commit to its bearings. The fundamentals were already rolling in on Monday. On Sunday, Spain's election closed with the Socialists winning the election but with far short of a notional majority of the Parliamentary seats with only 123 of the 350. That keeps a sense of status quo for the Eurozone's fourth largest economy. On the data side, Eurozone Economic sentiment for the past month slowed more significantly than expected (104 versus 105 expected) with business and industrial confidence slowing as well. In the upcoming session, the data waters are far deeper. Eurozone and Germany employment data is on tap as is consumer confidence for the largest member economy, but the real impact will come from the first quarter GDP figures. Both China and the US beat expectations with their respective updates - though the sentiment those figures leveraged was limited. The bar is set high with the market showing limited responsiveness. The broad Eurozone figure is one of the most important readings to come from the region, but I would add Italy's own figures to the top of the list. After the sharp downgrade for 2019 forecasts by the IMF and then the Italian government itself, concern is easy to understand. Will this be simply an economic concern or will it evolve into a political one as well?

Trade Wars Will Carry Sway Over for USDCNH, USDCAD, USDMXN and Perhaps EURUSD

Outside of growth and monetary policy - obvious and rightfully dominant themes moving forward - attention should still be paid to the influence of trade wars. There are multiple fronts on which this fundamental weather pattern will ebb and flow. From the past year's focal point, Chinese officials are clearly attempting to employ a PR offensive to signal to the United States that they are serious about their negotiations. It was reported that officials are pushing legislation to intellectual property rights including the Vice Commerce Minister announcing new laws around foreign direct investment that look to address foreign companies' complaints more quickly. Until we see a specific date offered for when Chinese President Xi will visit US President Trump at Mar-a-Lago, traders should suspend their speculative anticipation for another strong trade war relief rally. Another Asian trade relationship for Asia, Japan's leadership visit to the White House this past week left Trump saying a US-Japan trade deal could be in place by end of May - though traders are understandably dubious. We’ll see what good will that can leave Japanese markets on with a full week of thin liquidity.

For the United States' closest neighbors, some fundamental stir is likely moving forward. On the trade negotiations side, Senior Senator Chuck Grassley warned the President that if he does not drop the tariffs on Canada and Mexico that the USMCA (replacement for the NAFTA agreement) was dead in the water. That trade deal was touted as a success story for the hardline negotiations tactics of the Trump administration, so to see it fall through would prove a complication for building confidence behind a true deal with China. Meanwhile, we are due to see how the United States' trade partners are coping with the pressure from their largest counterpart. Mexico is due to report its first quarter GDP figures while Canada is on tap for April figures. The speculative positioning behind these currencies and pairs is remarkable. In particular, the COT (Commitment of Traders) standings show large futures traders are holding a leveraged short USDMXN position in contrast to the still-high exchange rate. One way or the other expect volatility. We discuss all of this and more in today's Trading Video. 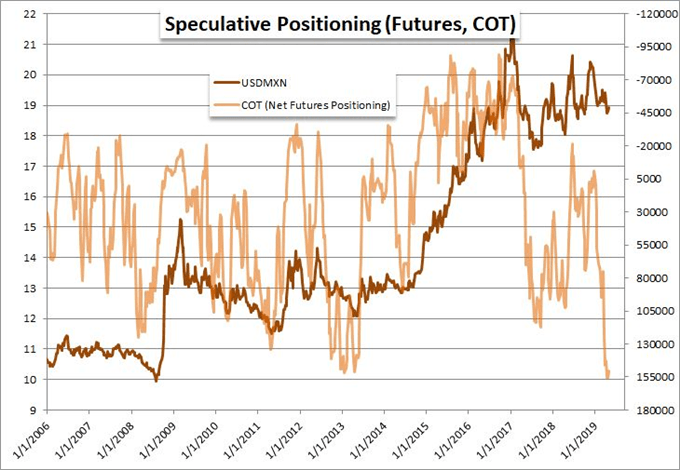