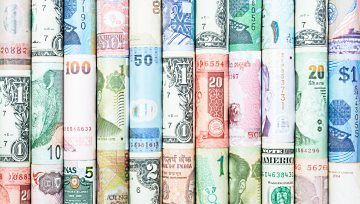 Unsurprisingly, EURUSD overnight implied volatility spiked ahead of tomorrow’s economic growth data from the Eurozone and now sits at 5.78 percent, slightly above its 2019 average. EURUSD 1-Day expected price action has drifted lower, however, from a reading of 7.23 percent before the US GDP report release last Friday. 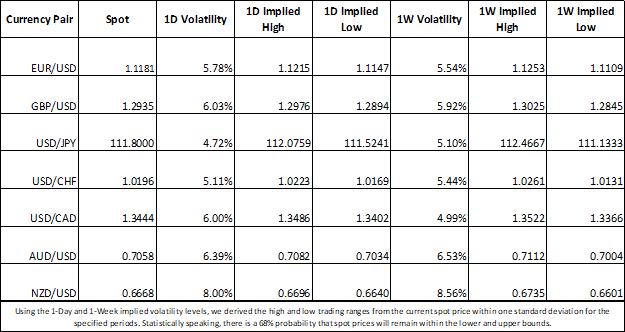 This could indicate that currency traders are expecting Eurozone GDP (1Q19 YoY) to fall relatively in line with the 1.1 percent forecast whereas more uncertainty clouded expectations for US GDP data.

Yet, tepid expectations have only grown bleaker for EU economic growth following a series of downward GDP revisions for 4Q18 GDP – the final reading of 1.1 percent drastically halved initial estimates of 2.2 percent.

More recently, several economic indicators out of the EU have painted a dreary picture of Eurozone fundamentals and could potentially suggest that the bloc’s GDP data may disappoint once again. 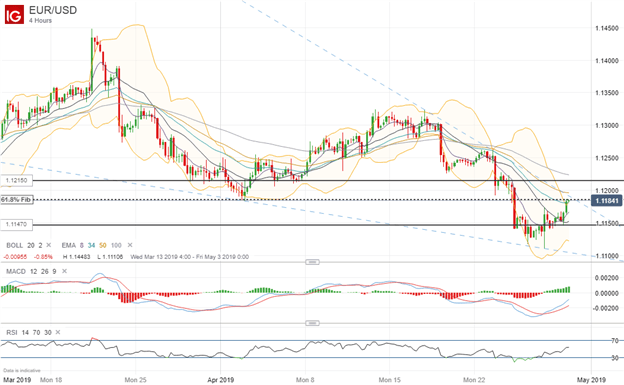 As such, EURUSD traders could witness a swing in spot prices greater than the implied move of 34 pipsif tomorrow’s high-impact GDP data surprises to the downside. On the contrary, if Eurozone economic growth prints an upbeat report, spot EURUSD may quickly reclaim the 1.2000 handle.

Although, the 61.8 percent Fibonacci retracement line drawn from the low on January 1, 2017 and high on February 11, 2018 could pose a significant headwind to Euro upside against the US Dollar. That being said, EURUSD trader sentiment data from IG still shows a mixed trading bias despite net-short positions increasing by 20.4 percent relative to last week.

Shifting to the Mexican Peso, one of the most actively traded emerging market currencies, USDMXN has potential to gyrate tomorrow in response to Mexico’s GDP release. Trade between Mexico and the United States has grown into a somewhat touchy subject as the two countries approach final stages of ratifying the new-NAFTA, USMCA trade agreement along with Canada.

Friction over President Trump’s unwillingness to alleviate tariffs on steel and aluminum imports while concerns voiced among politicians remain material hurdles to signing the deal into law. The lack of clarity over trade policies have potential of weighing negatively on business decisions and consumption which could drag economic activity lower as a result. 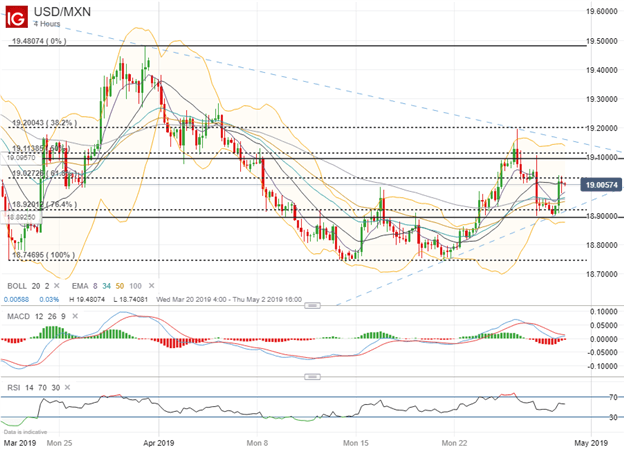 Moreover, Friday’s US GDP report detailed that imports dropped a sizable 3.7 percent over the first quarter – a negative sign for Mexico seeing that the country relies on the US for roughly 80 percent of its exports. Judging by USDMXN overnight implied volatility, spot prices are estimated to trade between 18.893 and 19.096 with a 68 percent statistical probability.

If Mexico’s GDP misses to the downside, USDMXN could continue its recent ascent. However, the 61.8 percent and 50.0 percent retracement lines drawn from the low on March 20 and high on March 29 of this year might serve as technical resistance. Conversely, if Mexico inks a solid GDP report above the 1.4 percent estimate, USDMXN has potential of targeting downtrend support formed by the lows on April 22 and April 29, which also comes into alignment with the 76.4 Fib level.