- Soft growth and inflation readings are likely to renew speculation that the European Central Bank will change its Staff Economic Projections at the June ECB meeting.

- Recent changes in retail trader positioning suggest that EUR-crosses are on mixed footing.

The first look at Q1’19 Eurozone GDP on Tuesday should see growth rates remain tepid at best, with the quarterly rate due in at 0.3% from 0.2% while the yearly rate is set to hold at 1.1%. Consistently weak growth figures should serve to underscore the European Central Bank’s Governing Council’s view that risks have moved “to the downside.”

After Reuters recently reported that ECB officials were concerned that the recent Staff Economic Projections were too optimistic, the Q1’19 Eurozone GDP report could be seen as a significant piece of evidence that will be used to justify a cut to growth forecasts at the June ECB meeting.

Elsewhere, the preliminary April Eurozone Consumer Price Index is due on Friday at 1.6% from 1.4% (y/y), a sign that weakness in the Euro in recent weeks coupled with the ongoing rebound in oil prices may be helped stabilize the price outlook. The core reading is due in at 1% from 0.8% (y/y). With inflation expectations tempered – the 5y5y inflation swap forwards have barely budged in recent weeks – it’s doubtful that policy makers take the developments too optimistically. 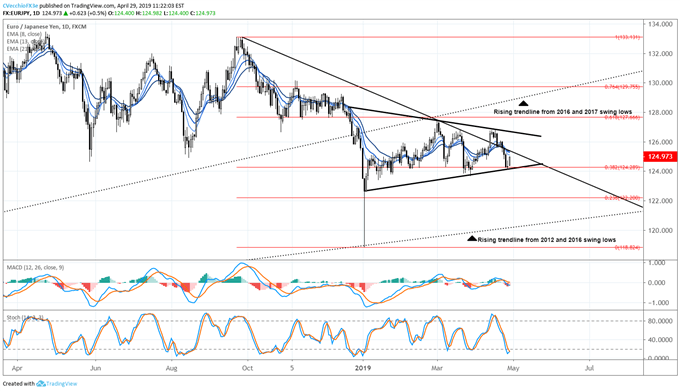 EURJPY prices have spent most of 2019 oscillating between the 38.2% and 61.8% retracements of the September 2018 high to January 2019 low range, around 124.29 to 127.67. During this consolidation, prices have flirted with breaking out of the downtrend from the September 2018 and March 2019 highs, but thus far traction has failed to gather pace.

Instead, it’s possible that EURJPY price has been consolidating into a symmetrical triangle in recent months – in fact, the triangle may go back to the middle of December 2018. To this end, we note that momentum is mostly flat at present time, given that price is back to its daily 8-, 13-, and 21-EMA envelope while daily MACD has returned back to its signal line.

Accordingly, the EURJPY price forecast is neutral in the near-term as we await resolution of the symmetrical triangle. A break above 126.80 (April swing highs) would suggest that the odds of a topside resolution had increased significantly, whereas a break below last week’s low around 124.09 would indicate that EURJPY price was more than likely to resolve itself lower out of the symmetrical triangle. 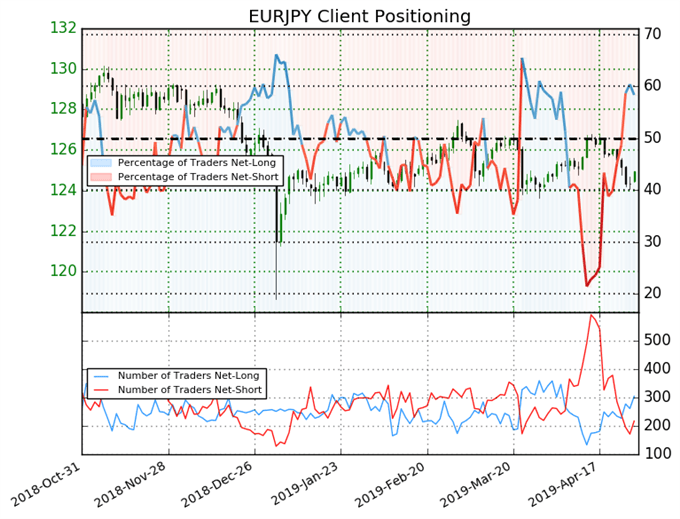