Sign up for my live webinar coverage of the FOMC rate decision or a host of other webinars on a vast array of trading topics on the DailyFX Webinar Calendar page.

Amid a Focus on FOMC, Trade Wars Return to the Stage

The next 48 hours will be heavily focused on monetary policy with a particular interest in the Fed's decision - complete with forecasts on the economy and interest rates along with the unique insights Chairman Jerome Powell offers in response to reporters' questions. Yet, before we consider the weight behind monetary policy winds, it is important to remember that there are a few critical winds blowing in these markets - squalls that can take over for the broader markets with little forewarning. The general outlook for economic activity is one such consideration that will inevitably return to center stage - particularly if we see a major economy like the US or general global economy stall (or drop into an official recession). In the meantime, another theme has swept back into influence without warning. This past session, it was reported through 'US officials' that China was backtracking on its agreements on intellectual property. That is a serious potential escalation beyond mere extensions to the time frame for a US-China agreement that we've registered over the past few weeks. Given the scale of support global trade has afforded economic activity, traders should keep close tabs on this situation.

As unexpected as the trade wars headlines were this past session, the interest in US monetary policy moving forward is an obvious setup with the Fed rate decision on tap Wednesday. The policy announcement is scheduled for 18:00 GMT and anticipation is running hot. This is not one of the restricted policy meetings. This particular gathering will weigh on policy for this particular event while also delivering quarterly forecasts (on growth, inflation, jobs and interest rates) as well as making Chairman Jerome Powell available for answering journalists' questions. There is a lot of anticipation packed into this particular meeting. The Fed is in flux with a September rate forecast projecting 3 or 4 hikes in its 'SEP', then the December update lowering that outlook to 2 hikes. As of this past session, Fed Fund futures are pricing in a slight chance of a cut today and 26 percent probability of a cut by year end. At the same time, officials have set expectations for the QE withdrawal effort to be throttled soon even though the balance sheet is still hovering close to $4 trillion. This has relatively straight forward implications for the US Dollar as a carry currency, but how will 'risk markets' interpret the Fed's fear over the future? Will a little more support for a little longer spur another flush of speculative reach or will it be viewed as panic by the navigators? 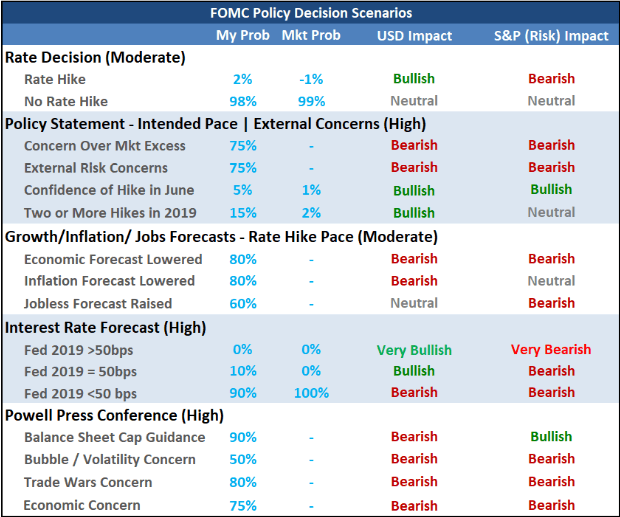 A High Probability EURUSD Breakout and Drawn Out Pound Risk

In the FOMC rate decision, there is a considerable amount of probable event risk. That said, it is striking that implied volatility measures are set so low. That is true of virtually all major markets from equities to Treasury yields to emerging markets to FX. While it is likely that the major policy group takes a very accommodative approach, the implications for speculative reach are not as certain as they once were. One noteworthy highlight in the market's underappreciation of the activity ahead is the anticipation of tumult for the currency market. In the CBOE's EURUSD volatility reading, we find the lowest measure since December 2017 - itself a peak low that finds no comparison unless we look all the way back to the listless summer of 2014. That is particularly remarkable given a quick glance at the short-term technicals for the pair show an obvious breakout risk. On the back of the past two weeks' climb, the pair is now trading in a 20-pip range that simply cannot withstand even a standard average daily range. With the 100-day moving average coinciding overhead with a well-established descending trendline resistance, there is an influence imbalance on the technical side relative to the trendline support best seen in a 2 or 4-hour chart. A break is very likely, but that does not mean that follow through will readily follow. A move lower would follow the 'path of least resistance' in a swing to an overt range floor, just don't write off a bullish break. Either way, remain skeptical of follow through.

In contrast to the US Dollar and its very explicit scheduled event risk, the British Pound is burdened with its own fundamental fixation, but there is no explicit date or event to affix expectations. When the Speaker of the House of Commons announced late in the weekend that Prime Minister May could not bring the same Brexit proposal that was rejected this past Tuesday back for a second vote, it made the path out of the Brexit hole even more complicated. There is still a possibility that Parliament weighs in on a new scheme, but the markets are dimming on the prospect of a near-term resolution. So long as this situation continues to flounder, the Pound will be a burden on traders. Breakouts will struggle for follow through even more readily than the general speculative environment and trends are extremely circumspect. On the other hand, a greater commitment to range can skew probabilities on technical setups like the GBPJPY or even GBPUSD (should the Fed decision cooperate). 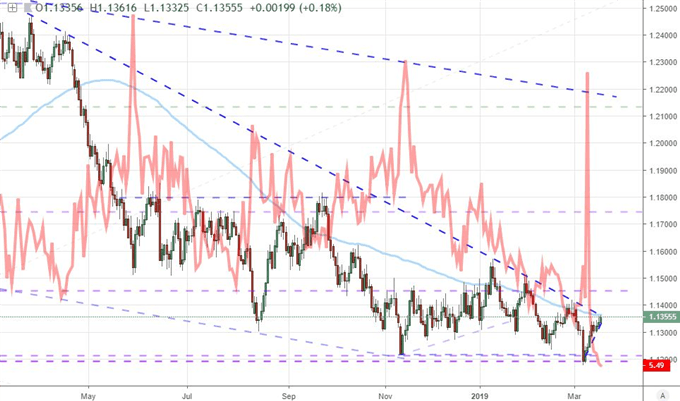 The Benefit to Euro, Aussie and Kiwi Dollars Without Open-Ended Risk

Trade wars, the FOMC decision and Brexit uncertainties are all worthy of our focus and anticipation. However, we don't necessarily have to chase these systemic issues with large volatility cross sections to find opportunities in the market. The Euro is will prove one of the more interesting currencies through the remainder of the week. It is the second most liquid currency and perhaps the least loaded relative to the Dollar, Pound and Yen (risk-centric). That isn't to say it doesn't have its own unique issues. There is definite spillover from the EU-UK divorce and high contrast to the Fed-ECB monetary policy balance. Local event risk running from investor sentiment (a modest improvement but still deeply negative this past session) to the upcoming ECB economic bulletin, Eurozone consumer sentiment survey, Euro-area PMIs and EU Summit are all very important. These figures could contribute to the EURUSD's technical resolution or EURGBP trend determination, but I wouldn't set out that expectation until after the cross winds pass.

In the meantime, the Australian and New Zealand Dollars continue to run untethered from risk trends and their historical carry currency roles. That can significantly reduce the unexpected risk hanging over these markets, but it may also make for a higher threshold for triggering meaningful volatility. Yet, local event risk could fit the bill. The Aussie Dollar's history with employment data should not be underestimated, especially given the breakout potential from pairs like AUDUSD. As for the Kiwi Dollar, the current account balance will extend the consumer sentiment survey and service sector PMI run, but it is the 4Q GDP update that presents the serious amplifier. If you want to keep tabs on the truly concentrated crosses, consider AUDNZD, AUDCAD and NZDCAD. We discuss all of this and more in today's Trading Video. 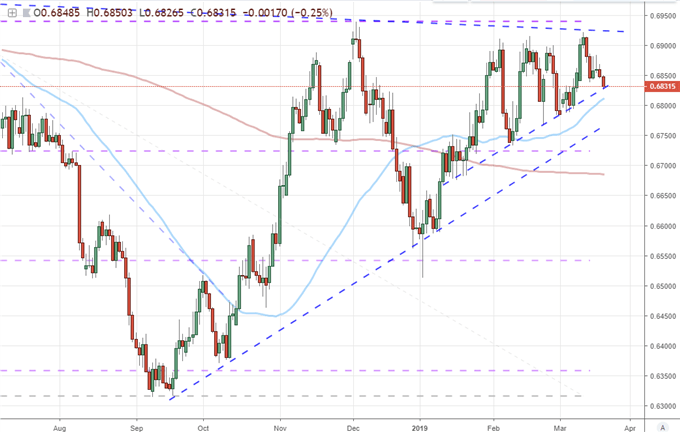