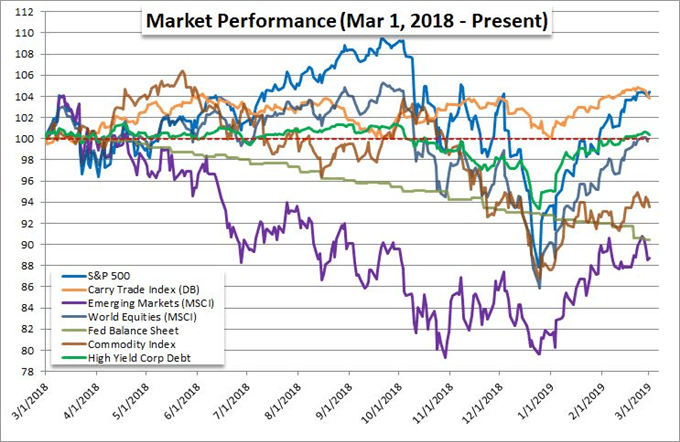 EURUSD Faces Inevitable Breakout but Can the ECB and NFP Really Trigger It?

Though capital market benchmarks like the S&P 500 and Dow were already far along in their recovery over the opening months of the year, the encouraging developments behind some of the most headline-dominant fundamental risks this past week offered some investors justification for their speculative bid to buy into 2018's tumble. This past week, the threat of a 'no deal' Brexit eased greatly with a Parliamentary amendment that seems to assure the Prime Minister's commitment to avoid withdrawal with a plan. That is a relief for global markets. Even more fret has been spent over the rise of global trade wars, particularly between the US and China. Therefore, it was no surprise that the announcement this past week that President Trump had instructed the March 1st deadline to increase tariff rate on Chinese goods (from 10 to 25 percent) to be deferred indefinitely owing to progress in negotiations cleared the air significantly.

Of course, true to form, the President did tweet after the close that he expects his counterparts to drop all tariffs on US agricultural goods in return for the removing the tariff hike threat and the US is still looking to prosecute the Huawei CFO after Canada approved extradition. If these threats nevertheless recede, we should not simply revert to the complacent risk setting of previous years. In the absence of 'newer' threats, we are reminded of more traditional risks.

Global monetary policy will be a well-worn issue this week and credit risk is criminally underappreciated, but we have something more tangible on tap: global growth. We've already absorbed most of the 4Q GDP figures, but the timelier sentiment surveys and PMIs speak to carry through trouble. In the week ahead of us, China's National Peoples' Congress will likely set a new, lower growth target for the world's second largest economy. Further, the OECD's semi-annual economic outlook is not likely to impress.

Patience is a virtue for few traders, but it also happens to be one of the most important characteristics for a successful career. That is not just patience for confirming a technical break or for holding onto a winning trade, it also means keeping tabs on markets where the tension continues to build but the release seems to be constantly delayed. There is no better example of a market that we should be keeping very careful track of than EURUSD. This is the benchmark currency pair and thereby qualifies as one of the most liquid 'assets' in the world.

As influential as it is, however, it has seen its activity levels drop sharply. The historical range for cross as shrank aggressively over the past year and the 20-day Average True Range or ATR (equivalent to a trading month) is at one the lowest levels in the history of the pair. For the average person, this a pair to abandon. Yet, extremes are 'extreme' in that they will not last at such levels (here of quiet) for long. The only comparison we have to this inactivity is 2014 which preceded the ECB's overt connection of stimulus to an exchange rate on the EURUSD (1.4000).

Could this be history repeating itself? From the Euro's docket this coming week, we have the European Central Bank's rate decision. The group ended its QE program in December, but its transition to normalization has meet unfavorable market conditions, trouble in the economy and wary members. On the other side of the same pair, the Dollar is even more taxed fundamentally, but it seems to have found some unexpected balance in this deluge. Economic activity will be burden ahead for this currency, but so too can monetary policy pose a possible speculative leak. The NFPs due Friday will tap both themes, but don't expect them to be hit equally. 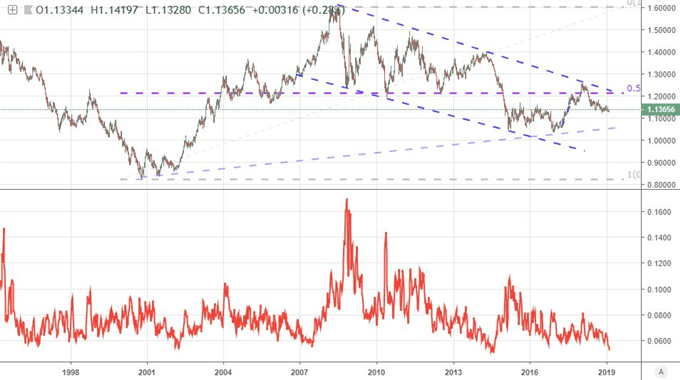 While there are not too many systemic events or themes expected this coming week that can reliably be expected to start the crank on the global markets, there are many more direct charges for regions and specific currencies. The Pound remains a currency that is burdened by the uncertainty of Brexit. While the imminent danger of a forced 'no deal' outcome has been reduced this past week with Parliament's vote, that has not made any clearer the outcome of this political and economic upheaval. The question Sterling traders are facing here and now is: 'exactly how much of a discount was the Pound at with the anticipation of a March 29th nasty divorce and thereby how much rebound is deserved?' GBPUSD, GBPJPY and EURGBP already indicate we may have hit that rebalance already.

The Australian Dollar was stirred this past week, mostly by Chinese influence, but the docket ahead is overloaded with domestic releases. The Australian 4Q GDP, current account, corporate profits, monthly trade balance, inflation forecasts and more are all important. However, the FX fixation will naturally hover over the Reserve Bank of Australia (RBA) rate decision. Swaps show it as the most likely major central banks to cut rates in 2019.

On the other end of the hawkish/dovish curve, the Bank of Canada (BOC) rate decision will be more sensitive to nuance. The Loonie was spurred to life this past week when December and fourth quarter GDP (-0.1 and 0.4 percent) proved far more troubled than expected. Watch these pairs for volatility, but keep those full-scale breakout and trend expectations in check. We discuss all of this and more for the week ahead in this trading video. 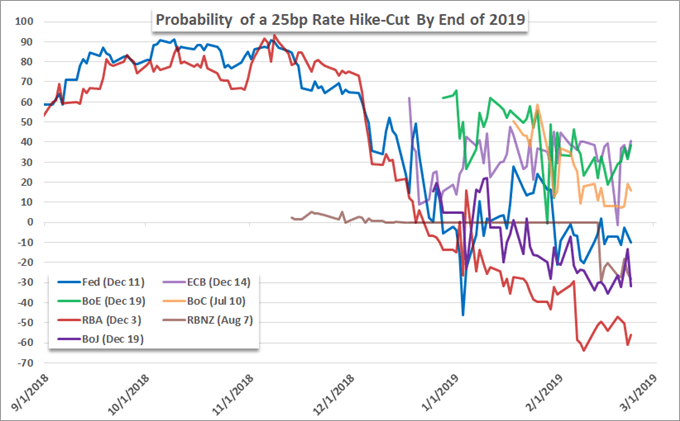