Will a S&P 500 Breakout Face the Same Fate as the EURUSD’s?

Technical patterns are rarely extremely obvious - at least in practice - so it stands to reason that there is a similar degree of opaqueness in fundamentals. As the saying goes: 'if it were that easy, everyone would do it well' (and then paradoxically, there would be no opportunity left for anyone). We would see the trouble with establishing a speculative course on both the charts and among the themes via the US indices as of late. Following nearly four weeks of impressive charge, the S&P 500 and Dow have worked their way into progressively narrow trading ranges. In other words, they have established terminal wedges that will soon run out of room. The insinuation is a break from this congestion, but that doesn't carry over to a certain follow through. Nor should we expect a trend take root unless there is a clear and driving motivation for the speculative masses. As it stands, there are numerous fundamental events and themes competing for the market's attention and none of them are presenting an explicit trend such that a clear leader can take the yoke. The US government's partial shutdown remains an unresolved issue with 0.13 percentage points of growth shaved off US GDP each week, but there are at least some signs of negotiations. Trade wars are offering optimism from the likes of White House economic adviser Larry Kudlow on one hand who says negotiations with China are going well and on the other we have US Commerce Secretary Wilbur Ross who says the two countries remain 'miles and miles apart'. Monetary policy still represents a systemic but unsound foundation for years of speculation, though there is no explicit tipping point in its support for equity levels. Is there any wonder then that the markets struggle to establish a clear and progress trend? It is likely that the S&P 500 sees a break before week's end, but don't expect the questions restricting trend to suddenly be resolved. 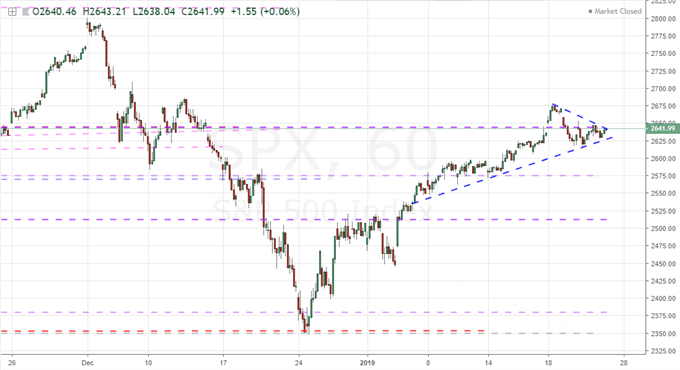 Dollar Offers As Little Excitement on a Break as Possible

Breakouts are important events. I consider a 'breakout' to be an omnidirectional term - meaning bullish or bearish - so the EURUSD's drop below 1.1335 this past session qualifies. The clearance would take the market below a line of support that has connected four major points of test and reversal stretching back two months, so it qualifies as 'meaningful' in my book. Yet, here is where the real analysis begins. A technical spark signals potential, but it does not ensure that true opportunity will follow. Whether I'm referencing the chart or the fundamental backdrop, I see good reason to doubt it will find much. For the pair, this break pulls us back into a range that has plenty of technical density down at 1.1265 and 1.1215 below to curb follow through. Looking to the Dollar's performance more broadly, I'm left with the same impression. The trade-weighted DXY Index looks like the mirror of the EURUSD while the equally-weighted index I like to reference simply has a longer period of congestion to eventually find its way out of. The trouble is motivation. There is little in the way of the high-level risk aversion that would trip the switch on a single-track mind of flight to safety. Then again, the absolute reach for yield that benefited the Greenback as a carry currency shows no sign of returning. The domestic impact of the government shutdown and trade wars are starting to show through more overtly in downgrades from the likes of the IMF as well as in sentiment data like last week's UofM report. When a clear bearing on risk trends is found, the Dollar may finally find its commitment. Until then, we should approach trends with a sense of skepticism. 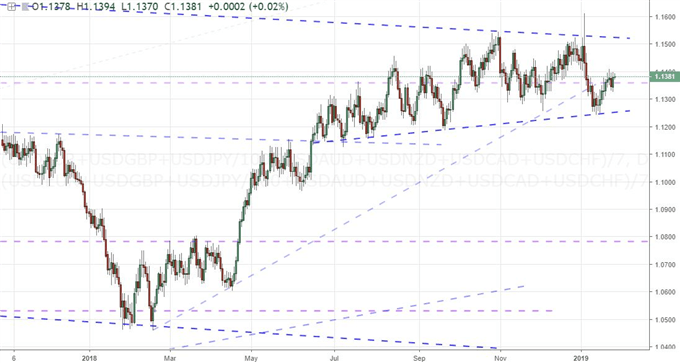 Euro's Slide Finds Foothold but How Much Trend?

In the EURUSD's slide Thursday, I would attribute more of the progress in the drop to the Euro. A universal dip would also tip EURGBP into a technically-provocative break - while leaving us with the same sense of unreliable intent. It was easy to trace the fundamental charge behind the currency's move back to scheduled event risk. The January PMI figures are good proxies for the delayed but official GDP readings. The French and German figures were mixed - with acute weakness in the former's service sector and latter's manufacturing industry. The broad Eurozone readings in the meantime were universally weak. That bodes poorly for the Euro for many reasons, but the ECB (European Central Bank) made clear where the pain would be most immediately felt: monetary policy. The central bank held its first monetary policy gathering since ending its stimulus (QE) program in December. This puts the world's second largest central bank in an important state of flux where it is transitioning from outright dove to tentative hawk. Yet, the reversal is under considerable scrutiny given the general market conditions - troubling enough that the market has downgraded its rate forecast from three hikes in 2019 to deep skepticism over even a single move. There was no surprise in the ECB's hold in both the benchmark yields as well as the balance sheet, but the rhetoric from President Mario Draghi proved insightful. The group and its leader struck a notably dovish chord, warning that the risks were tilted to the downside and that the outlook for growth was fraught. The probability around the first ECB hike seems to be moving definitively to 2020 at earliest while the sense of preparation for future economic and/or financial troubles is coming under severe scrutiny. Under a microscope, there is a lot of concern that can arise around the Euro. Is it enough to put EURUSD or EURGBP on trend? That is unlikely, but an accumulation of issues may tip the balance. Ahead, we have a few high noteworthy events - the German business sentiment survey and the ECB's professional forecasters' survey - but don't naturally assume this will fill in for trends. 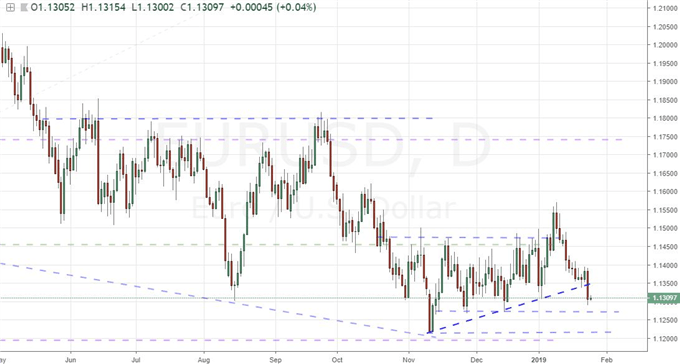 Checking My Technical Appetites Against Practical Expectations for Pound

If I were operating on technical cues alone, the Pound would spark my appetite for a trade one way or another. If I were a true believer in the Pound's rally, the likes of GBPUSD and EURGBP would look particularly appealing. The former cleared its eight-month trendline resistance Wednesday and could use the 200-day moving average immediately above as the next milestone to drive forward a bull trend. The latter's drop below 0.8700 takes out trendline support that stretches back to lows established immediately after the Brexit volatility fallout. The problem is that conditions can change dramatically with little warning between now and Tuesday. What happens Tuesday? Parliament is due to vote on Prime Minister Theresa May's Plan B Brexit proposal following her unprecedented defeat on the first effort last week. Will the MPs find compromise with the PM on a deal that could be accepted by the EU or is this maneuvering to a standoff and more dramatic outcome (second referendum, no deal)? Headlines of mere rumor can swing headlines from one extreme to the other with little warning. It is that reality that leaves me extremely cautious with an otherwise appealing Sterling position. If I could draw clear optimism over the negotiations, then Sterling's break on GBPUSD and EURGBP would represent remarkable opportunities as they are on the technical cusp. The same pairs would be appealing to fade if hope collapsed, but my interests would fall to GBPCAD as the range boundaries still stand. There are options for either the bull or bear on the Pound, yet the problem is not necessarily direction but commitment. And that is not something we can easily adjust for. We discuss all of this and more in today's Trading Video. 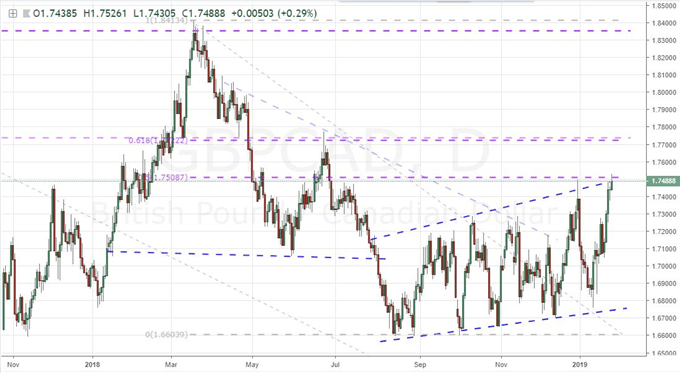