How are market conditions altering the market's ability to respond to critical events and changes in systemic fundamental themes? Join me for Monday's Fundamental Trading webinar to discuss the capacity of the markets into the end of the year. Sign up on DailyFX Webinar Calendar.

Once Again, US Indices Leave the Markets with Weekend Anxiety

US indices seem to have a nasty penchant for unsettling traders over the weekend recently. With risk trends taking a dive to close out this past week, the pressure translated into a speculatively-loaded close from the likes of the Dow and S&P 500. Finally applying some semblance of direction to the steady state of volatility, the benchmark measures dropped to multi-month lows (on a daily close basis) and tentatively cleared high profile trendline support. I qualify these developments, because there intensity can - and likely will - be disputed in speculative positioning through the week ahead. Take the S&P 500 for example. A close below 2,600 marks the lowest daily finish for the index since April and it can be argued that it took out trendline support in the process. On the other hand, we have yet to overtake the intraday low on December 10 and a host of possible support levels can be drawn from congestion back to February and March - even October and November of last year down to 2,550/35. This technical ambiguity is similar to the backdrop on the fundamental side. There are more than a few key events and unfolding themes that can be seized as justification for fear should the market so choose. This past week, the financial media saw in the slide an appreciation of the slide in global growth prospects. Chinese retail sales and industrial production hit their weakest pace of growth since 2002 and 2003 respectively, Japanese business forecasts for the final quarter slowed, the Eurozone economic activity measures (PMIs) hit the slowest pace in four years and the US economic measures notably fell short of expectations. 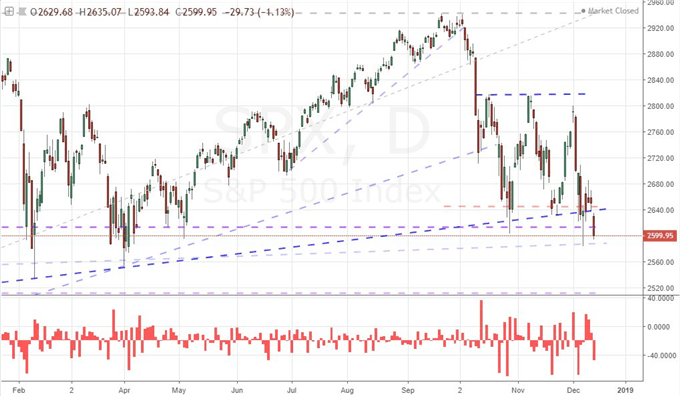 Event risk will inevitably throttle back as we head deeper into December. That doesn't mean however that volatility will full dissipate. We have seen measures like the VIX and short-term equity volatility ETF (VXX) hold to remarkably high levels as an indication of a new resting level for activity. This is more appropriately a reflection of general anxiety than of full-fledged intent on the speculative rank's part. Markets are in fact offering readings that are either exceptional or outright unprecedented. The 100-day moving average for the VIX is near its highest level since mid-2016. In another sign of the heightened state of anxiety, the frequency and scale of gaps on the open for the S&P 500 has hit levels previously unseen. In normal market conditions, this would set the stage for a high-probability technical break with ready potentially to full a transition into a meaningful trend. With our current environment however where liquidity is a known diminishing quantity, the chances for a systemic move are exceedingly unlikely (though not exactly impossible). What's more, a pause in volatility over the next few weeks does not mean that the risks are forever forestalled. Looking ahead to 2019, the inevitable return of liquidity will revive the tensions created by these unresolved fundamental themes across the financial system.

Another remarkable move this past week to raise anticipation for the week ahead was made by the US Dollar. The DXY Dollar Index advanced through Friday and in the process of its midday swing, hit the highest level we've seen since June 2017. That tag of an 18-month high was an intraday peak and not a move made on a close basis. The difference is important as a close at such levels would generate far more attention and significantly more speculation. If we refer to the Greenback in other forums, the technical pressure looks far less intense. EURUSD - which is the largest component of the trade-weighted index - is still out of reach of the low around 1.1200 set last month. USDJPY and AUDUSD similarly are far from their respective Dollar extremes. At the moment, the Greenback is playing the role of an alternative to acutely unloved majors - a 'best of the worst' situation. If the Euro, Pound and/or Yen continue to suffer strong outflows, the Dollar could conceivably rally despite liquidity and even its own shortcomings. What are those inherent issues? There are a number of concerns that are systemic but abstract in nature for the currency - credit ratings on a ballooning deficit, political stability, mass diversification away from the benchmark owing to its efforts to press forward with a trade war. However, there is a more pressing them at hand: Fed policy. The central bank is due to weigh update us on their normalization course Wednesday. A hike is a very high probability, but their plans for 2019 have been cast in deep scrutiny. With a subtle language shift from key officials, a moderation of data and rise of financial market volatility this year; the market expects one or two at most further hikes next year. We will see the group's own anticipation in the Summary of Economic Projections (SEP) that will accompany the decision and statement. 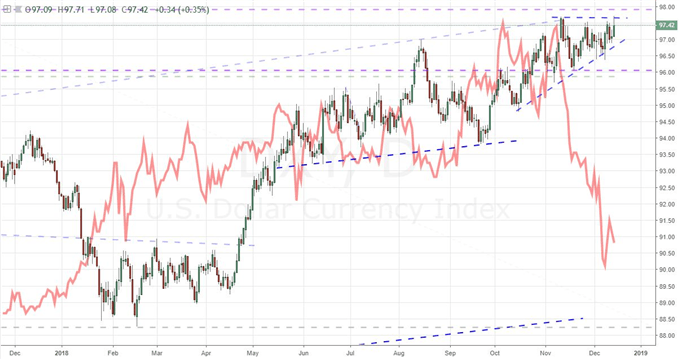 Outside of the all-consuming influence of the Dollar, there are fundamental swells to account for. The Euro had to deal with headlines and the docket to close out this past week. On the calendar, the December PMIs (proxies for a timely GDP update) reported a notable downgrade in activity. At the same time, the breakthrough on the Italian-EU budget standoff didn't seem to come at the conclusion of the European Community summit. There is more European event risk on the docket for the week ahead, but if you expect this currency to overcome its flagging inertia, it will likely have to tap deeper themes. Another disappointing turn from Europe's leaders this past week was their refusal to further compromise for UK Prime Minister to bring more favorable terms to her skeptical Parliament. In fact, certain sweeteners from the previous deal were rescinded. As always, breakthroughs on this drawn out slow-motion car crash seem to always be reversed before true confidence settles in. Ahead, we have the Bank of England (BOE) rate decision; but this will offer little insight on actual policy plans an instead play compass to separation scenarios. If you're looking for a currency that has proven itself unattached to either themes or targeted event risk, it is time to consider the Kiwi. Neither RBNZ rhetoric or risk trends have altered the course. That said, the currency took a serious slip this past week, and it seems easier to 'disappoint' with bearish implications than 'impress'. The New Zealand 3Q GDP release will be an indicator to watch either way. We discuss all of this and more in this weekend Trading Video. 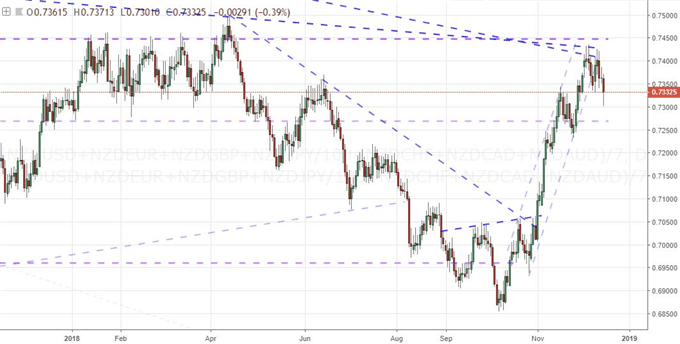