Dow and S&P 500 Can’t Keep Up with DAX and FTSE, Dollar’s Advance a Crawl

The Outperformance of European Over US Equities

There is a clear disparity in performance in global equities performance. If we benchmark to the start of the recovery after the Great Financial Crisis (around March 2009), US stock indices are still sporting the most robust trends across not just comparable equities but broadly the various classes of 'risk assets'. Yet, looking at more recent performance, it is unmistakable that the balance of power has shifted in favor of European markets. Where the Dow and S&P 500 are trading in the middle of 2018's range and have spent the last three trading days stuck in mud, some of the most heavily traded European counterparts are charging higher. Both the German DAX 30 and UK-based FTSE 100 are running eight consecutive weekly advances. That is an impressive stretch for the German index, but we haven't seen this scale of move for the FTSE since 2005 - and we haven't seen greater since 1994. Further, the UK baseline returned to a record. What is intersting about this performance is that neither region's markets are backed by a particularly encouraging fundamental landscape. Political risk, moderating growth forecasts, monetary policy wobbles and more earn scrutiny. Just this past session we were registering the commonplace concerns over North Korea, Iran and US-Chinese trade tensions. It is always worth taking a step back and asking: how interested am I in the best performing participant in a dubious trend?

Dollar Struggling as Euro and Pound Stem the Bleeding

There is no doubt that the Greenback has done remarkably well through April and into May. Yet, much of this lift doesn't seem to imminating from the Dollar itself, rather its the reflection off the Euro and Pound (among other key crosses). When the markets are already in motion, it is easy to find justification in the favorable Fed rate forecast but the value gap has balooned on that front for some time. Add the international and domestic political risk coming out of the Trump administration, and there is certainly reason to be cautious. To keep traction on the USD, the opportunism with taking advantage of the Euro and Pound is a necessity until something more substantial comes along for bulls. That said, the Euro is again proving itself remarkably resilient to fresh concerns around the stability of the monetary and economic union as Italian politics steer towards belligerence. The same hold is evident with the Pound lately despite the further pressure behind Brexit and slide in BoE rate forecasts. I am sticking with my EUR/USD short but trailing up the stop. And the pressure building behind the GBP/USD is interesting but not tradable in my opinion until a reliable charge comes along. 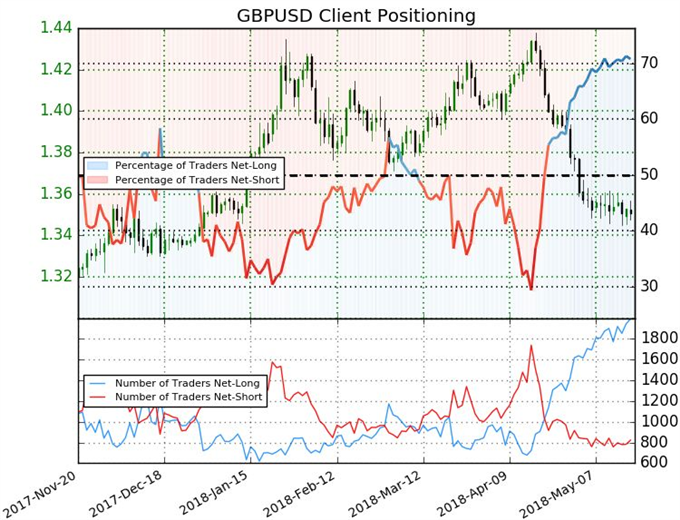 There are few more appealing technical pictures being carved out at this moment than with the Swiss franc and Aussie Dollar. Yet, as much potential as there may be in these currencies and their crosses, we should be dubious of what they are able to achieve if there isn't more meaningful motivation to carry sentiment forward. For the Swiss currency, there are plenty of remarkable technical patterns to be inspired by - USD/CHF and CAD/CHF being great examples - but where can these coiled-spring reversals find their drive? Most of the motivation we would expect from the franc should be sought in EUR/CHF. The SNB and domestic Swiss developments ultimately have limited sway over the performance of this currency in the broader FX market, but the Euro's overwhelming influence relative to this struggling counterpart can define its bearing and pace. I am watching this pair very closely. As for the Aussie Dollar, there is no other currency with the same degree of universal appeal. Yet, what looks like primarily reversal potential finds limited resource from growth, trade, rate expectations or even general risk appetite to give it charge. If the fundamental support were certain, I would be particularly interested in AUD/CAD, GBP/AUD and AUD/USD. 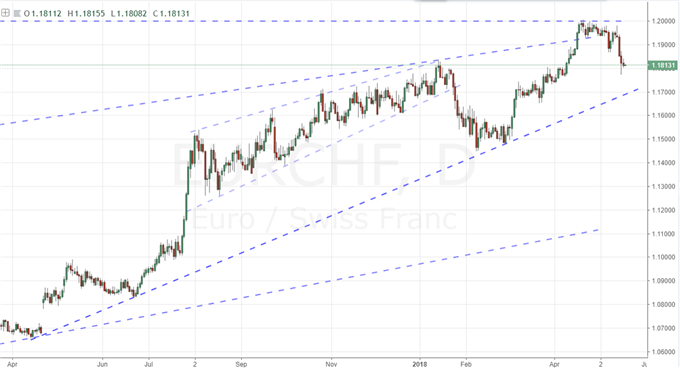 In contrast to the disconnected nature of the franc and Aussie Dollar, there is both appealing technical backdrop and some fundamental motivation to the New Zealand and Canadian dollars. For the Kiwi, the past session offered up the extremely lackluster producer-level inflation report for the 1Q which only adds weight to the RBNZ's recent suggestion that rate cuts are as likely as rate hikes when the central bank is again ready to move. That pushed NZD/USD and NZD/CAD further into retreat with noteable progression breaks. As for the Canadian dollar, the currency is also stretched but this time to the upside. That said, the private payrolls figures (ADP) and capital inflow data this past session paired with the encouraging outlook for NAFTA negotiations warms the trade and domestic growth backdrop to lend further lift to the buoyant standing. To truly secure its extension - or alternatively, pull the trigger on an inevitable reversal - we should keep a wary eye on the upcoming Canadian CPI figure which can tap into rate expectations. We discuss all of this and more in today's Trading Video. 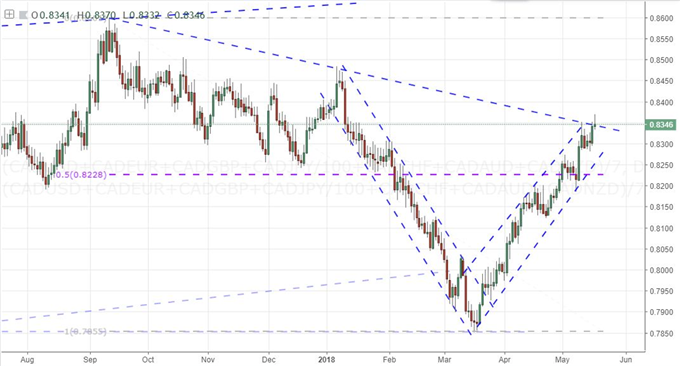