- USD/CHF has continued to strengthen through April, following a bullish break of a bearish trend-line that took place as we turned the page into Q1.

- At this stage there is a legitimate concern around the pair being overbought on a near-term basis, as RSI is in overbought territory on both daily and four-hour charts, and RSI divergence has been showing for some time on lower time frames.

In the first quarter of this year, USD/CHF was one of the most attractive pairs for playing continuation of USD-weakness. The Swiss Franc’s strength was synergistic with Dollar-weakness, and as each of those themes remained prominent through the first half of Q1, USD/CHF drove down to fresh two month lows.

But in the month of March, something began to shift, and the bearish response that had been so consistent in the pair began to wane. By the end of the month, we traded above a bearish trend-line, and then in early-April, we looked at using that trend-line for fresh support as the pair solidified above the .9500 psychological level. That theme has continued to run as a weak Swiss Franc is now being combined with a strong US Dollar, and prices in the pair are now trading at fresh three-month-highs. 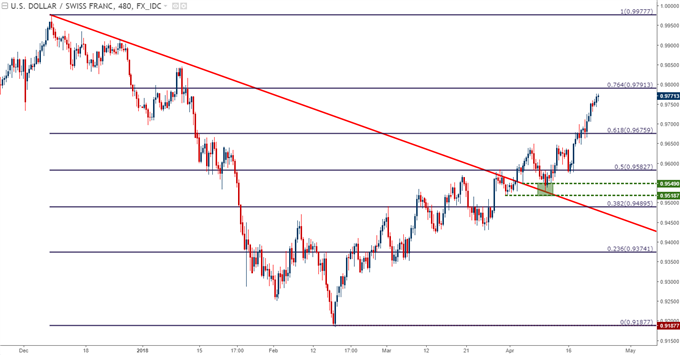 Another newer trend-line has formed in the pair, taken from the late-March to mid-April lows. That trend-line is shown in blue on the four-hour chart below, and noteworthy here is how prices are well-elevated above this trend-line, denoting a currently overbought state in the pair. 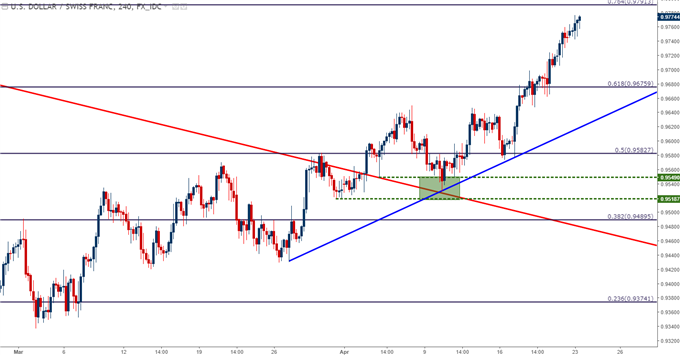 Both the daily and four-hour charts of USD/CHF are showing overbought RSI, and on shorter time frames, the indicator has been diverging for some time. This highlights the danger of chasing at this point as that trend is well priced-in, and a pullback could make bullish continuation strategies a bit more attractive.

On the below chart, we’re looking at three potential areas of interest, each of which are above that bullish trend-line looked at above. 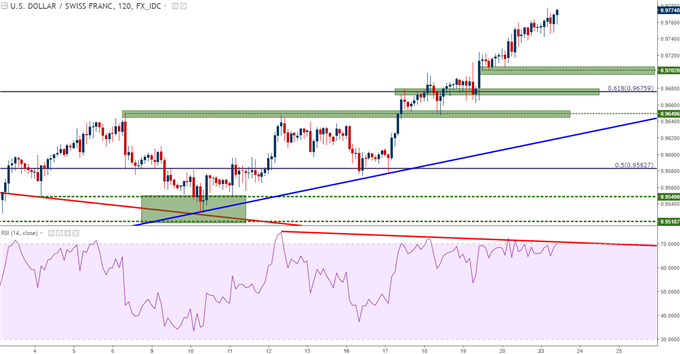