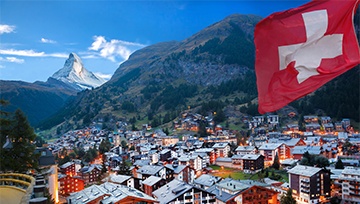 - USD/CHF strength has shown-up in the second half of Q1 after a very tough first half of the quarter. Prices are now trading over a key point of confluent resistance.

- While that move of strength remains, USD/CHF still carries hints of being overbought as RSI divergence remains on shorter-term charts.

USD/CHF spent most of the first half of Q1 in the process of selling-off, eventually setting a fresh two-year low in mid-February as bears very much remained in-control. But after that fresh low was set on February 16th, strength began to show as the pair tilted higher and, at this point almost two months later – that strength has not yet stopped. Prices have set a fresh two month high this morning as USD/CHF rallied up to the .9600 level. This bullish run now includes a break above a bearish trend-line that had showed-up off of the highs in December/January price action. 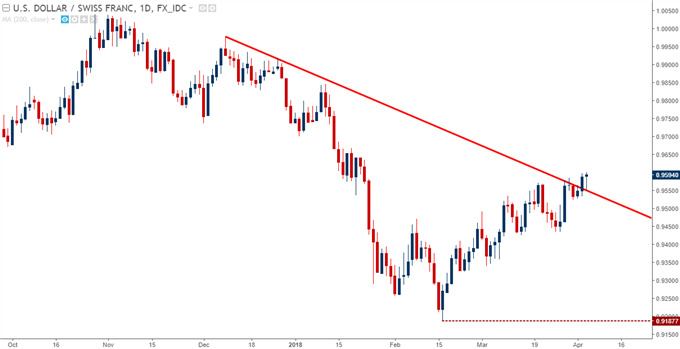 At this stage, we’re in the process of breaking above the 50% retracement of that recent major move, taking the December high down to the February low. This level comes in at .9583, and this price had helped to set last week’s high, which was confluent with the bearish trend-line looked at above. With a bullish break above this area, the door begins to open for a continuation of bullish price action. 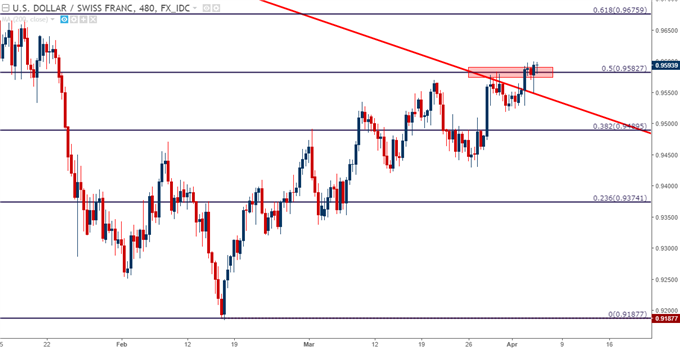 At this stage, the primary complication with trading the topside of USD/CHF would be one of positioning. As we’ve approached resistance in the past, even as we break through today, that bullish response appears to weaken as we get near prior highs. While this does not preclude the possibility of continuation, it does highlight that this bullish move is quite stretched at the moment, and if we look at relative strength on the two-hour chart, we can see where RSI divergence showed-up after yesterday’s move to fresh highs. 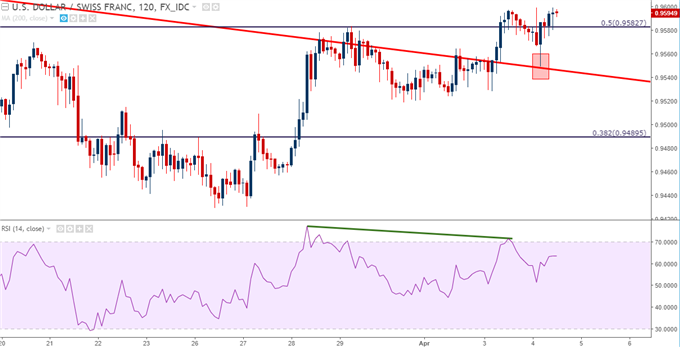 On the above chart, we used a red box to point out an inflection around the .9550 level, as this is the current day low which happened to show a quick element of support off of that bearish trend-line projection. This could be a key point on the chart for bulls, as a higher low above this level keeps the door open for top-side strategies. This would allow for stops to go either below the prior batch of support around .9520, or below the psychological level of .9500.

This same point can also be used on the bearish side of the market, as failure to hold this support would break the chain of recent higher-highs and lows, and a further downside break back-below .9500 opens the door for short-side strategies. 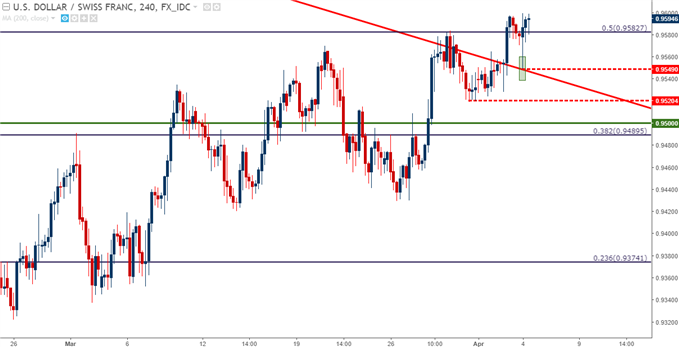