- USD/CHF sank down to test the two-year low in the pair after last Thursday’s USD sell-off.

- Prices have rallied up to a key Fibonacci level and are currently displaying lower-high resistance.

The pain trade in the U.S. Dollar has continued through the first month of the New Year, and that weakness has been very visible against the Swiss Franc. While the trend in EUR/USD faces a bit of congestion around the 1.2500 psychological level, the move in USD/CHF has been a bit more clean as prices posed a one-sided drop from .9850 just a few weeks ago to support around .9250 last Thursday. This price around .9250 is a big deal, as this is the two-year low in USD/CHF. 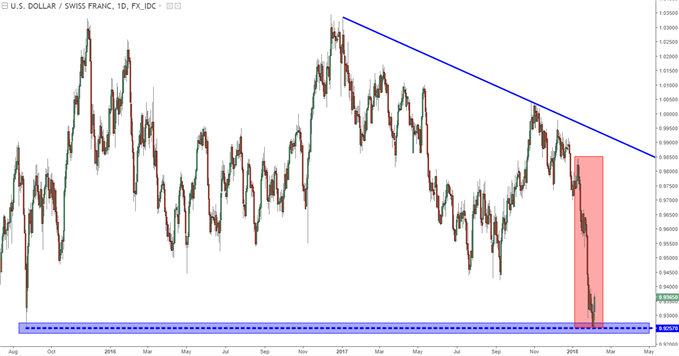 Since the Dollar began to trend-higher on the back of last Friday’s NFP report, a bit of strength has started to show in USD/CHF. Prices have rallied up to the 76.4% Fibonacci retracement of the May, 2015 to January, 2016 major move. Notably, support had developed at each of the retracement levels above the 76.4, with support swings seen at the 38.2, 50 and 61.8% retracements. Price action now appears to be finding some element of short-term resistance at this level. 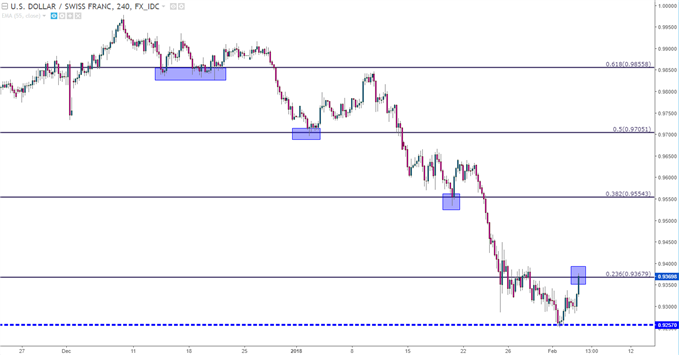 On the hourly chart below, we can get a bit of additional context; with the 76.4% Fibonacci retracement helping to set a bit of short-term resistance after the bump-higher in early US trade. Given prior price action structure, this can keep the door open for short-side continuation strategies. A zone of prior swing-highs that runs from .9386-.9409 can be looked at as short-term resistance above our Fib level, and above that we have a prior swing at .9450 that can be usable for stop placement on short-side continuation sets. Given the reaction at the two-year low of .9257, traders would likely want to plot for initial profit targets well-inside of this level, such as .9290 for an initial scale and break-even stop move. 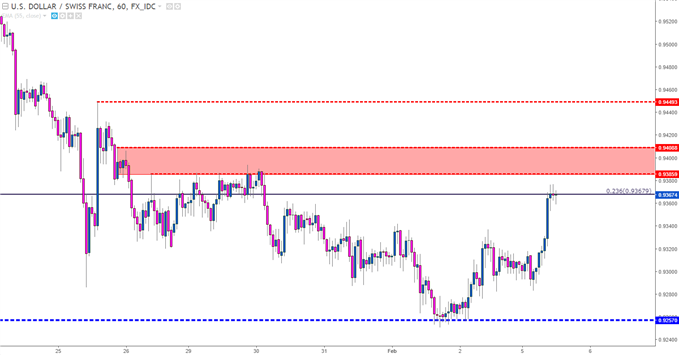