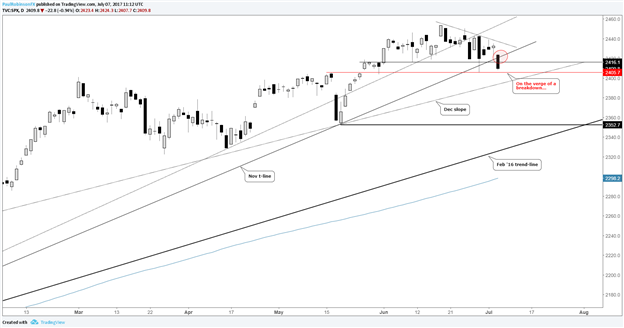 Find out where our analysts see global equity markets heading in our Q3 Quarterly Forecast.

On Wednesday, we discussed the precarious positioning of the S&P 500 as it was bearing down on important support by way of the November trend-line and 6/29 sell-off day. We expressed the timing of a make-or-break as being a matter of days. We also noted that support is support until it isn’t. A break, though, could soon be in store – warranting an outright bearish outlook.

Yesterday, the market took a hit and closed below the November trend-line, further weakening the technical backdrop. The closing print was only about 2 handles away from the 6/29-day low. A close below 2405 would be our cue to look for further weakness.

There is a slope rising up from December which may act as support, but it’s not viewed as significant. We’ll have to see how price action responds should we see it tested before drawing a concrete conclusion as to how much weight to give it. The real level of interest doesn’t arrive until 2352, the swing-low in May. Not far below the May low lies an important trend-line running up from the February 2016 low. If down-side objectives are met, in the current market environment, it would be considered a relatively large drop off the high from over 2450; spooking investors and giving rise to volatility (a much-welcomed event for traders).

Should support hold and the S&P forcefully move back higher and recapture the November trend-line we’ll have to reassess, and a period of chopping sideways (consolidation) may still be in progress. Looking around at a couple of other major global indices we follow closely – DAX & FTSE 100 – we are seeing the potential for sizable drops to unfold. (For more, check out these recent pieces for the DAX & FTSE.) The Nikkei has rolled over back beneath the 20k mark as well. A global risk-off event could be in the works...