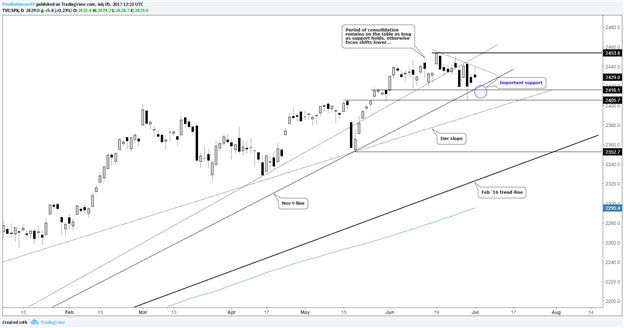 S&P 500 – With Key Support Close at Hand, Next Few Days Could Be Important

Looking to improve your trading? Check out our Trading Guides.

The question asked in the last post regarding the S&P 500 was, “consolidating or topping?” At the time the lean was towards consolidating, giving support and trend the benefit of the doubt. On Thursday, the market took a hit, and on an intra-day basis the trend-line from November and recent range was violated, but still maintained on a closing basis. The outlook is becoming increasingly precarious, though.

However, continuing to run with ‘support is support until it isn’t’, the market is still holding up and a neutral to bullish posturing remains intact. The market may just be undergoing a healthy consolidation which will lead to another leg higher down the road.

But should we see a clean closing daily break below the Thursday low and subsequently the bottom of the range and November trend-line, the bias will quickly shift to bearish. In this case, the first potential line of support is a slope rising up from December under the May low. How much the market leans on it as support is unclear. Price action around a test of this line, should we see a drop, will determine whether we should pay mind to it. If it were to give-way then there isn’t anything significant until the May low at 2352, and then the important February 2016 trend-line which lies not far below.

Heads up: Later today we have June FOMC minutes at 18:00 GMT, then Friday the June jobs report will be released. Both have market-moving potential over the short-term, with the minutes likely holding the largest implications.