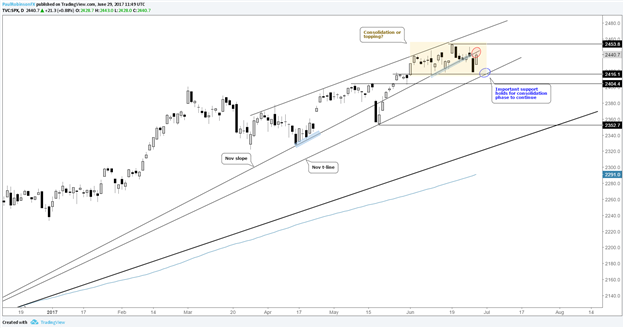 How do you turn U.S. stock market news into a trading plan? See our guide here!

In this week’s S&P 500 forecast, we discussed support by way of the November slope as holding on by a thread, and ultimately important for the market to turn higher from if it is to keep from experiencing a drop. Monday the market tried to turn higher from support but failed to find the buyers needed to push it firmly higher. The intra-day reversal to start the week led to Tuesday’s sell-off, which cracked the November slope and took the market down near the 2416 mark we have penciled in as support; the low came in at the 6/15 low a shade under 2419.

Yesterday’s pop erased the drop, but can it sustain? It will take a little more time to determine whether the S&P is undergoing a period of healthy consolidation or putting in a distribution top (where buyers become exhausted before a down-move ensues). In either event, the eventual outcome should become clearer soon.

The erasing of yesterday’s drop puts the market at an immediate retest of the November slope, so in the near-term if it can’t reclaim this line of resistance and move back to the top of the range (towards record highs), then risk skews back towards seeing the 2019/16 vicinity tested again, which will also result in a tag of the November trend-line. On a closing basis, a drop into support will need to hold to continue the notion that we are seeing a period of consolidation. (At this time, the thinking is consolidation…) A decline below noted support will shift focus lower as the range this month is validated as a topping process. Taking out 2404 and the November trend-line would open up a path towards the May low at 2352.