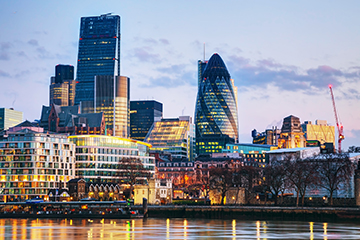 FTSE 100 Bounce to Fizzle on Retest of Broken Support

Looking to improve your trading? Check out our Trading Guides.

When we last looked at the FTSE 100 it was trading at the all-important 2013 top-side trend-line, which up until recent sessions held steady as support. During the process of breaking one key level of support the 6/15 low was taken out along with the June/’Brexit’ trend-line. This has the market poorly postured moving forward.

Since last week’s breakdown the footsie is trying to recover, but already running into trouble by way of previous support turned resistance. An underside retest (currently in progress) of the June/’Brexit’ trend-line, 6/15 low, several turning points since February, and a trend-line running down off the 6/20 swing-high may prove to be all the market can handle before turning lower. But if it doesn’t find opposition at current levels then we look for significant difficulty in overcoming the 2013 trend-line. It’s a top-side trend-line we’ve talked about at great lengths in recent months due to its influence. Sometimes slopes matter a little, and in some cases a lot – like this one. Trade up to 7450+ would be required for a recapture of the broken line.

Looking lower, the Friday low at 7302 is the first logical point of interest as support (it’s also a swing-high from April). If the market is to turn momentum back lower following a retest of broken support then it shouldn’t find too much difficulty in carving out a lower-low. Where buyers may show up is around the trend-line rising up from the February 2016 low (an important low) crossing under price action surrounding ‘Brexit’ (also an important inflection point). These particular connecting points make it an important trend-line. A strong break through there and the market may be signaling a broader shift lower.

For now, we’re running with a short-term downward bias as long as the market stays beneath resistance, and we’ll reassess on either a move above 7450 or once beforementioned support is met. 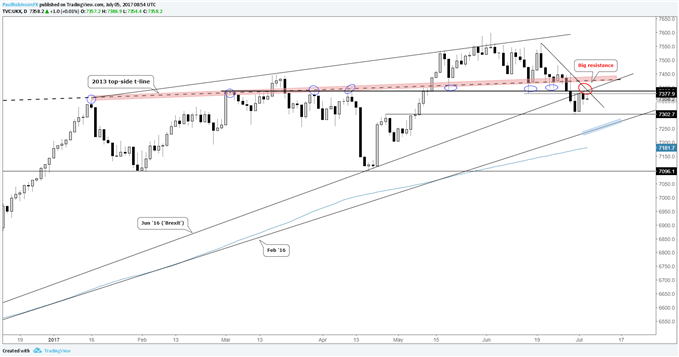