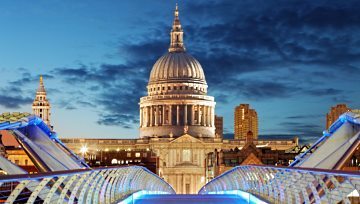 GBP/JPY Bounces from 145.00: Strength May Not Last for Long

- GBP/JPY is coming off the heels of a big month of movement, as the pair dropped by more than 1,000 pips as a combination of both Sterling weakness and Yen strength reversed the previous move of GBP/JPY strength.

- Yen-strength has become more commonplace of recent, and a Bank of Japan interest rate decision on Thursday night can keep that theme going. We looked into this scenario earlier in the article Euro, Yen Primed for ECB, BoJ.

GBP/JPY Gets Active in February

Time can really fly in the Forex market. While FX may not be the show of entertainment that’s built-up across the political spectrum over the past few years, bursts and jumps in activity can keep pulses racing; even when those bursts of activity are fewer and further between. In GBP/JPY, we had previously noted the peculiar behavior of quiet price action in the pair; as the more regular occurrence of pip-bursting volatility keeping traders (and analysts) chasing their tails had seemed to take a back seat to a slower, stodgier tonality in GBP/JPY over the past few months.

That stodginess has started to change, however, as bears came into GBP/JPY in February and never really looked back. After hitting 156.00 in the first few days of February the pair found itself more than 1,000 pips lower as we opened the door into March. This has been a rather clean move, too, as the post-Brexit trend-line was breached in a big way, and we’ve been following short-side entries off of both 150.00 and 147.50 as a fresh five-month low printed in the pair at 145.00.

GBP/JPY Bears Come Back with Ferocity: More than 1,000 Pips Shed Last in a Month 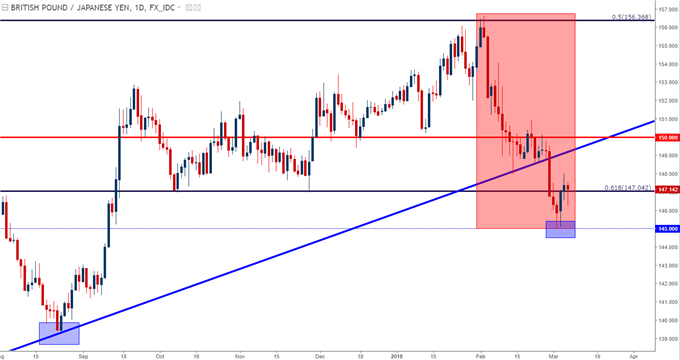 After the post-Brexit trend-line was breached, there was no looking back as sellers remained in-control all the way until we hit the 145.00 psychological level. At that point, a bounce began to show as deep oversold conditions opened the door to a squeeze type of scenario after an extended move pushed prices-lower throughout the month of February.

At this stage, we’ve seen 23.6% of that bearish move in February retraced, after which a bit of resistance has started to show. For those looking at aggressive stances in the pair, this could allow for short-side setups under the premise of stops going above yesterday’s swing high of 148.03; and initial targets cast towards 146.00, after which attention could then be directed towards that low at 145.00.

More interesting, however, and far more proactive to longer-term or swing-trading stances would be a deeper retracement to test the under-side of that post-Brexit trend-line. The bullish trend-line projects very near the 38.2% retracement of the same Fibonacci study looked at above, and this is approximately 60 pips below the psychological level of 150.00; making for a more formulaic outlay for bearish swings. 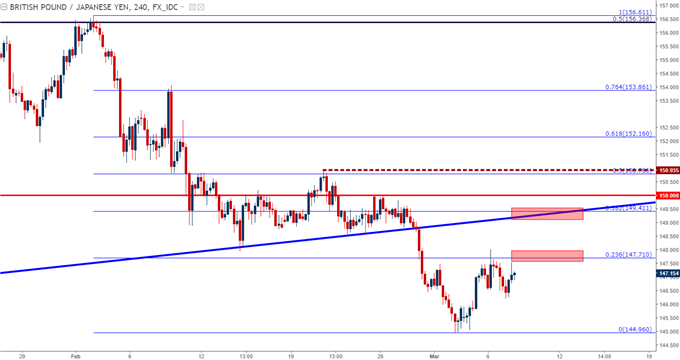