GBP/JPY Breaks Down After Breach of Post-Brexit Trend-Line

- GBP/JPY is getting crushed today after bears were finally able to push prices below the post-Brexit trend-line, which held the lows in the pair throughout last year. As we wrote last week, a break-below that trend-line could open the door to a significant bearish movement, and that’s what’s shown thus far.

- Prices have jumped all the way down to 147.04, which is a Fibonacci level that had served as both resistance and support last year, including the double bottom formation that came into play in Q4 of last year.

GBP/JPY is getting crushed this morning after sellers were finally able to push prices below the post-Brexit trend-line. We’ve been following this theme over the past couple of weeks as buyers have shown multiple iterations of support off of this trend-line projection. But as each of those responses were growing weaker, as indicated by the lower-highs accompanying each bounce, we posed the question of ‘how much longer might this trend-line hold?’ The answer was delivered today in definitive fashion, as that bearish trend-line break opened the floodgates of selling in GBP/JPY price action. 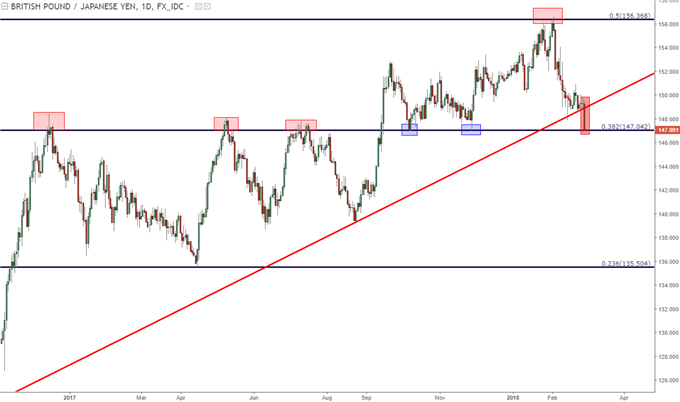 Last Friday, we looked at resistance plays off of the 150.00 psychological level for short-side exposure. That level came into play, albeit briefly shortly after this week’s open, at which point sellers took over and have not looked back. As we wrote – initial targets could be set to 149.00 but if that trend-line broke, the door could open to significantly more.

That’s precisely what’s happened as that trend-line breach has opened to a cascade of selling, and prices are now pushing down to fresh five-month lows in the pair. But – you probably noticed another interesting area on the above chart, and that’s the price of 147.04. This is the 38.2% Fibonacci retracement of the 2011-2015 bullish run in the pair; and the 50% retracement of that same Fibonacci study helped to mark the post-Brexit high in the pair when it came into play in early-February. This was a really important level in GBP/JPY price action last year, as it had helped to form a triple top in the first half of the year; and later became support to help produce a double-bottom in Q4.

This is a level that should not be discounted, as recent history has shown a strong tendency to produce a shift in this area.

GBP/JPY Daily Chart: Significant Support/Resistance From 2017 Coming Back Into Play 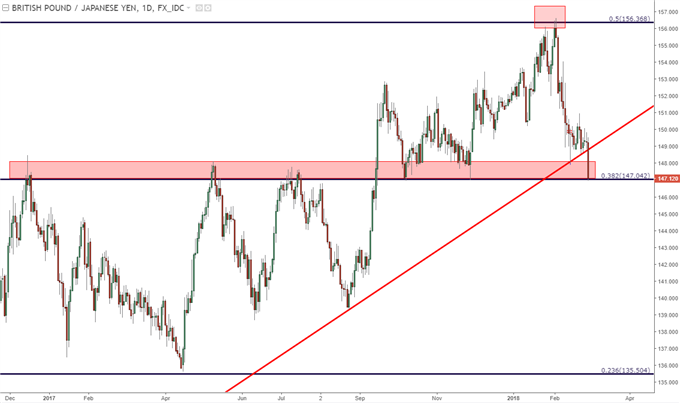 The bearish theme here has an element of attraction. Both prospects of Yen strength and GBP-weakness can remain interesting in the near-term, and this bearish breakout in price action goes along with this fundamental backdrop. The complication at this point would be one of strategy; as we’ve sold off to a huge area of prior support and prices are considerably stretched after a rather outsized move.

This opens the door to two possibilities: Waiting for prices to move-up to catch another instance of lower-high resistance; or, the possibility of short-term bullish reversals. The bullish reversal could be a dangerous way of going about matters as all we have is prices testing support; and any element of buyer response is rather limited given that this level just came into play a couple of hours ago. The more attractive way of proceeding would be to look for another lower-high so that bearish continuation could be focused upon. On the hourly chart below, we’re looking at three potential resistance levels inside of this week’s swing high at 150.00. 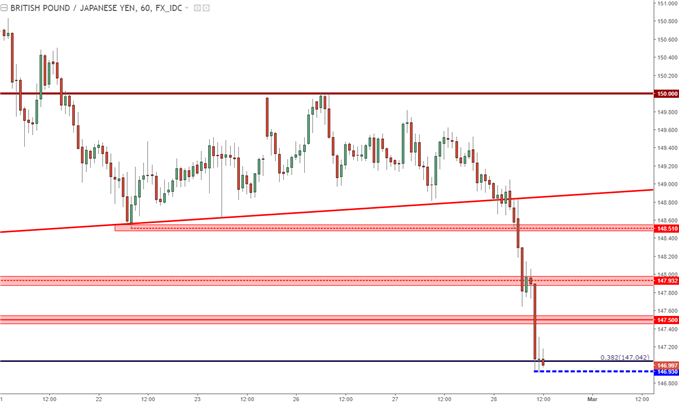