The New Zealand Dollar traded lower last week across the board after disappointing unemployment data. The fundamental development could shift the landscape if it is accompanied by similar statements from the New Zealand central bank next week. With that in mind, a fundamental catalyst could serve to shake up the technical landscape and create some bigger-picture breaks. 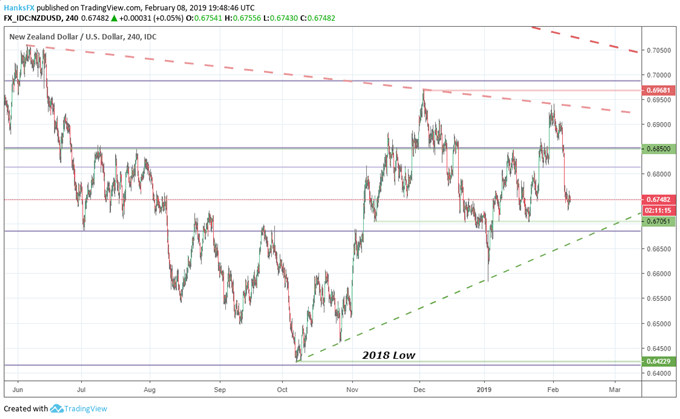 NZDUSD traded lower last week and plunged through multiple highlighted support levels. The pair has now etched out a wedge with the lower side originating at the 2018 lows around 0.6423. The upper bound dates back to mid-May 2018 around 0.7055, a level the pair was unable to pass through on multiple tests. The higher-side has since been tested in early December and again in early February. Within the wedge rests other support levels for shorter-term traders.

See our first quarter forecasts for NZD, USD, EUR and other currencies with the DailyFX Trading Guides.

One such support level rests around the 0.6700 range but commands less respect in the overall picture. Similarly, the 23.6% Fib level at 0.6688 should provide some support in the near term. While these price points are notable, the most important technical levels in the week ahead are the lower and upper lines of the wedge.

NZDJPY received the most votes on my Twitter poll this week and knocked NZDCAD off the stage for the time being. That said, I still provide consistent commentary and technical levels for multiple pairs on Twitter throughout the week. Follow me on Twitter @PeterHanksFX to participate in future polls and influence what pairs I cover in the weekly article here.

As for NZDJPY, the pair will be subjected to significant fundamental event risk in the week ahead. Thus, the technical levels to watch will be longer-term as volatility should be higher than normal.

NZDJPY had solidified considerable gains in the weeks immediately following the USDJPY flash crash that saw risk-on pairs like AUD and NZD experience similar price movement. After the unemployment data however, the pair now rests slightly above a support trendline from early January.

Since the rebound began, the line has not been broken and it will be the first line of defense against a move lower. Should it be broken, the 23.6% Fib level from July 2017’s high to the flash crash’s recent low will step in. Finally, expect some support in the 72.34 area if both of the other levels are broken. 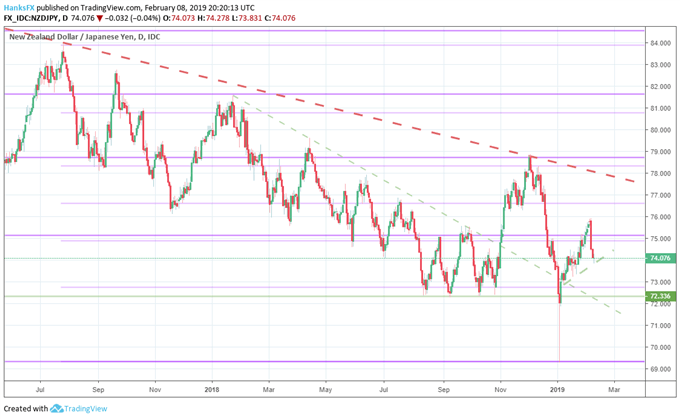 To the topside, 38.2% Fib resistance around 74.80 could give the pair pause on a smaller climb upward but would likely be blown through rather quickly on news of a large fundamental development. Similarly, the recent swing high around 75.89 should receive the same treatment. A resistance level that should command considerable respect is the trendline from January 2015 but it lies considerably higher than the current trading price.

Check out the other weekly technical forecasts: