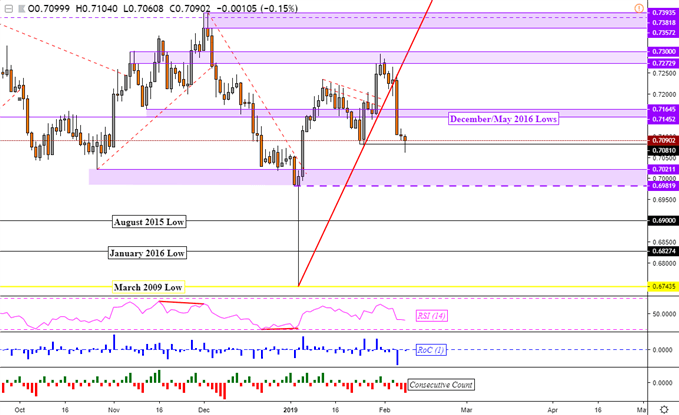 In this week’s vote, the most requested Aussie cross to cover was AUD/NZD. Tied for second place was AUD/CAD and AUD/JPY. Of those two, I will be covering the former as I think it is more interesting technically. If you would like to participate in each week’s poll and for the opportunity to break ties, follow me on twitter @ddubrovskyFX.I will post timely updates on the Aussie Dollar there as well.

Looking for a fundamental perspective on Australian Dollar? Check out the Weekly AUD Fundamental Forecast.

The near-term uptrend in the Australian Dollar quite literally fell apart this past week. AUD/USD descended through a rising trend line as it cleared a horizontal range of support between 0.71645 – 0.71452. However, the pair appeared to struggle achieving a daily close under the January 24 low at 0.7081. This further reinforced this area as support.

A descent through it would probably be the confirmation needed to argue technically that the pair may extend its declines. This places near-term support as a range between 0.70211 and 0.69819 next. Meanwhile, a climb back above resistance would expose the late January/early February highs (0.72729 – 0.73). With that in mind, the AUD/USD technically outlook appears slightly bearish.

Since bottoming in December, AUD/NZD has been struggling to pick a direction. This is despite the rally on Wall Street which reinforces the pair’s fundamental trait as a ‘risk-neutral’ currency pair. Technically, near-term support has been further reinforced as a horizontal range between 1.04347 and 1.04520. That area has consistently prevented declines over the past two months.

As such, a daily close under this area would probably be a good warning sign that the pair may enter a downtrend. That would require confirmation. Meanwhile resistance appears to be at 1.05439. A climb through it exposes a descending trend line from August. Taking this into consideration, the neutral outlook in AUD/NZD prolongs. 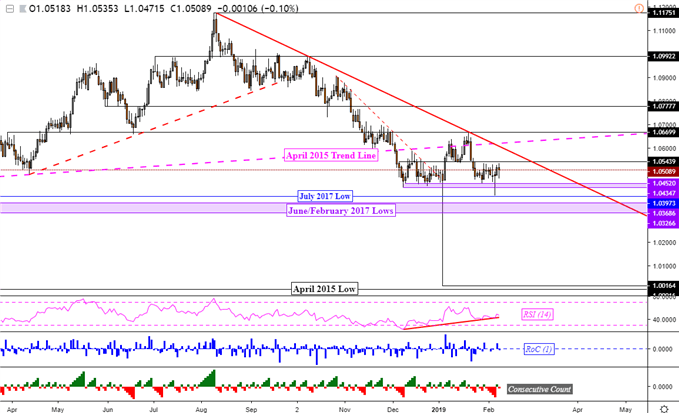 The support area of the consolidation range in AUD/CAD highlighted last week broke, exposing the pair to potential declines in the days ahead. Interestingly, the turn lower on February 6 was immediately followed by a rebound back up to consolidation support (now resistance). That held and now the pair is facing lower as of the end of this past week. 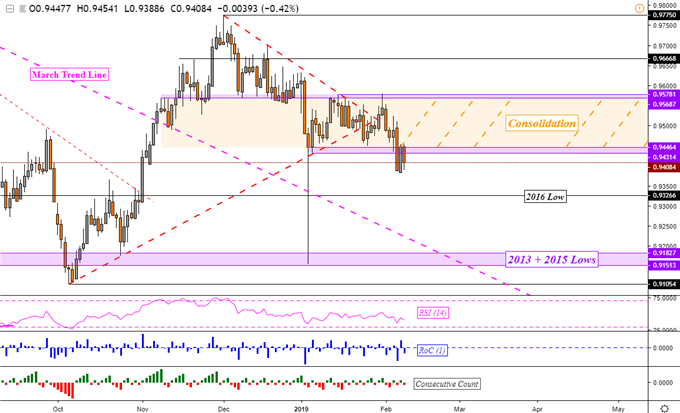 If we zoom out on the weekly chart, the turn lower in AUD/CAD is more noticeable. On this chart, performance can foreshadow more longer-term trends. In this case, declines are anticipated, as outlined in my top trading opportunities of this year.

Declines have immediate support as the 2016 low at 0.93266. A descent through it opens the door to testing 2013/2015 lows. Still, I would like to see another close lower on the weekly chart to confirm declines to come ahead. With that in mind, the AUD/CAD technical outlook sounds bearish. 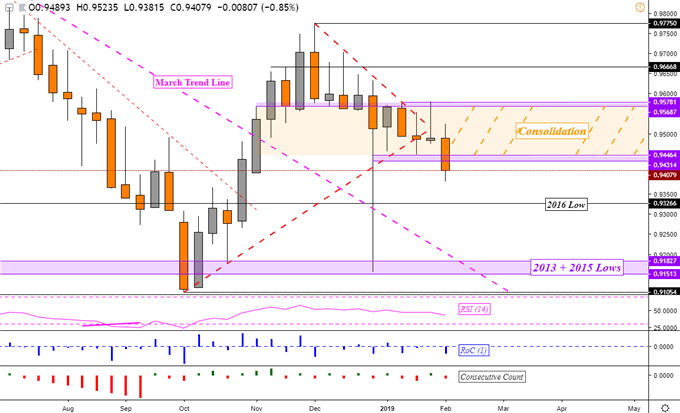