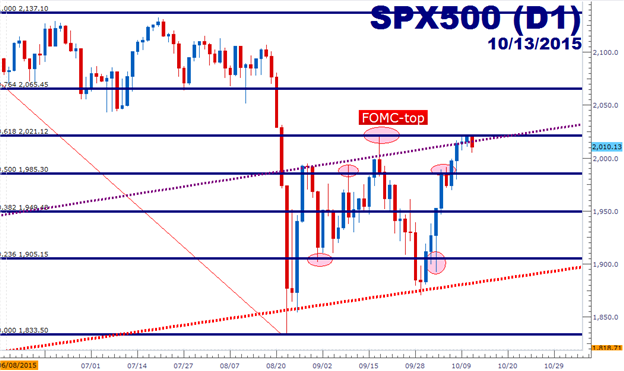 In our last article, we looked at how the S&P 500 was hurdling higher after disappointing jobs data in the United States. This was only a few days after a long-term trend-line of support came into the market and provided a vigorous bounce as we hailed in a return of the ‘bad news is good for stocks’ theme. In hindsight, that trend-line provided a significant bounce as we’re currently trading over ~130 handles off of the low that intersected with that trend-line; and for the past two weeks we’ve seen ‘risk-on’ in a very big way, reminiscent of 2013 when QE was getting married up with Operation Twist as the Federal Reserve turned QE to ‘full throttle.’

Since that reaction, we’ve seen the S&P 500 break through multiple resistance levels as price action surged with the larger overall ‘risk-on’ movement. But we’ve ran into a familiar level of resistance that could offer opportunity on both sides of the market. The most recent major move in the S&P 500 takes the top set in May at 2137, and takes the low set on China’s Black Monday of 1,833. Drawing a Fibonacci retracement through this move offers a plethora of levels, each of which have seen some reaction as price action has continued to test these ranges (shown below on the chart).

Two weeks ago as NFP printed, we saw an initial reaction of risk-aversion that drove stock prices lower. The S&P found support at the 23.6% Fib retracement of that move, and prices began moving higher under the presumption that such bad data would preclude an interest rate hike out of the United States. On Monday and Tuesday of last week, we saw the move continue all the way to 1,985 which offered temporary resistance, and this happens to be the 50% Fibonacci retracement of that most recent major move.

And for the past three trading days, we’ve seen resistance come in on the S&P at 2021, which is a key level, as this is the 61.8% Fibonacci retracement of this most recent major move, as well as being the exact high set during the September FOMC announcement. If you don’t remember that announcement, the Federal Reserve first excited markets by holding rates steady; only to spook investors in the hour following the release as Ms. Janet Yellen took on a hawkish tone during the press conference, assuring the market that the Fed still felt a 2015 hike was appropriate. We discussed this in depth in the article, Are Global Markets Losing Confidence in the Fed. That is what created the cascade of risk-off that sounded the alarm bells on the global economy, and price’s reticence to break above this key level could offer opportunity to traders moving forward.

The apparent play is to the short-side, as this three days’ worth of resistance could be a prelude to a near-term top. US stock markets are largely rallying under the assumption that the Fed is going to back off of a 2015 rate hike, and this is still unknown. Should FOMC members begin talking up a 2015 rate hike again, we could quickly see a return of the ‘risk-off’ theme, and this could bring in short-side targets at 2,000 (major psychological level), 1,985 (the 50% Fib retracement mentioned earlier), 1,949 (the 38.2% Fibonacci retracement of the most recent major move), 1,905 (23.6% of that same move) and 1,833 (the ‘panic low’ from August 24th).

Alternatively, another long-term trend-line could help to substantiate top-side plays: This trend-line can be found by connecting the June 2013 low to the October 2014 low, and this is shown in purple on the below chart. That trend-line is currently projecting to near-term price action, and this could be used to stage bullish plays. Traders can wait for prices to break above 2,021 as well as this trend-line projection. Once price action has safely moved above both levels, traders can look to get long with stops below the near-term swing low of 2,005 (today’s low). For this setup, traders would likely want to wait for confirmation, as the S&P is currently stretched to the up-side and risk-allocation could be challenging.