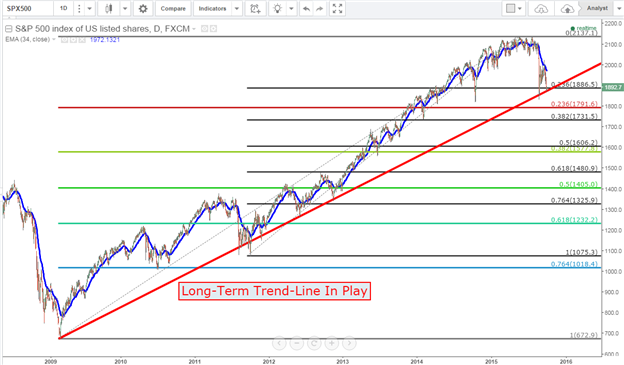 Risk aversion around-the-world has sent global stocks spinning lower as investors brace for a rate hike from the Federal Reserve while much of the world grapples with a lack of growth. Hit especially hard have been commodities and equities, as six years of Zero-Interest-Rate-Policy combined with Quantitative Easing drove stock and commodity prices to all-time-highs. Now that the Fed is no longer supporting the market with fast and loose monetary policy investors have fewer and fewer reasons to ‘buy the dip,’ leaving many of these asset classes to fall dramatically.

On the under-side of price action, 1,886 is a relevant level, as this is 23.6% Fib retracement of the ‘secondary move’ in the S&P 500, taking the 2011 low to the 2015 high. We’ve seen considerable intra-day activity at this level, and if this should clear then a range at 1,860-1,870 becomes an area of interest, as this is a projected trend-line connecting the financial collapse lows to the 2012 low, shown below:

On the long side: This would be a counter-trend trade, as price action has been moving aggressively lower on the S&P 500; but with proper risk management traders can look to play mean reversion with a stop below the support levels mentioned above. As price action is currently seeing a bounce off of the 1,886 level, traders could look to place a stop below the daily low of 1,870 with targets at 1,905 and 1,949.5. As of this writing, the risk-reward to the first target would be rather unattractive, as this would equate to ~23 handles of risk for 13 handles of up-side, which could unattractive even for a range-play. But a tighter stop below the 1,886 level could open the door for a 1,905 target, or should support find itself above the daily low of 1,870, a long position could become attractive with a stop below that low and the 1,905 target.

Written by James Stanley of DailyFX. To be notified as new articles are published, you can join his distribution list by clicking here; and you can converse with him over twitter @JStanleyFX.