A rather subdued session thus far with European and US equity futures trading in a narrow range. All eyes remain on the official signing of the US-China phase 1 deal, however, given that this has largely been priced in, market reaction is likely to be muted. In the US, earnings season kicked off to a mixed start with Citi and JP Morgan reporting better than expected earnings, while Wells Fargo missed on its EPS.

CHF: Upside persists for the Swiss Franc, gaining further ground against the Euro to hit its strongest level since April 2017. This had followed the US reincluding Switzerland on the watchlist in its FX report. As such, while the Swiss Franc is strengthening, in light of being placed on the watchlist, this could potentially discourage the SNB from intervening to curb the strength in CHF.

GBP: The Pound oscillates around the 1.3000 handle, however, with BoE dovish dissenter Michael Saunders scheduled to speak tomorrow, the currency is likely to see a renewed dip with the rate setter likely to argue his case for cutting in January. That said, with the most important event being next week’s PMI releases, which will be crucial as to whether the central bank cuts or not, we see dips looking attractive in GBP/USD as we don’t see the central bank cutting rates at the January meeting. 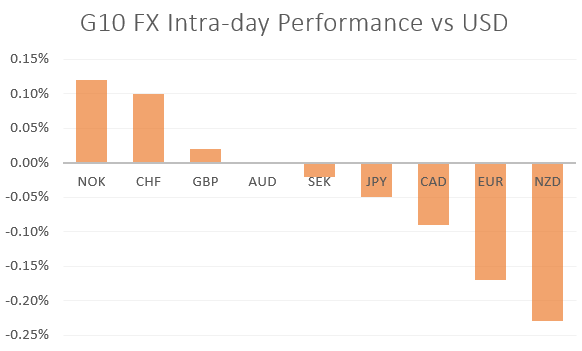