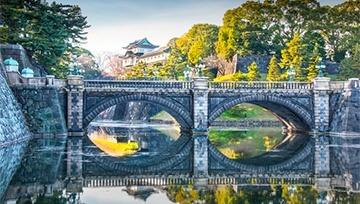 The Japanese Yen has played its customary haven role as the financial world frets US-China trade war and bond-market soothsayers seeglobal recession in the yield curve.

Could Yen strengthnow be a headache too far for the Bank of Japan?

The currency has been the closest thing to a fixed point markets get in a shifting and volatile post-crisis landscape. That’s because it is perhaps uniquely immune to economic developments in its home country for one very clear reason; they have no bearing at all on monetary policy.

A strong manufacturing or consumer confidence number in their respective countries, say, may well lift the US Dollar, or the British Pound, as markets place bets that interest rates are more likely to rise as a result.

Not so in Japan. The Bank of Japan has been resolute in its policy stance: no change to extraordinary monetary accommodation until consumer price inflation sustainably hits 2%. Inflation is therefore the only variable which counts.

The trouble is that, for its part, consumer price inflation has been utterly disinclined to respond.

It’s been below 2% now since 2015, and in ten years has only topped it for a brief period in that year and the one before. It’s latest showing, for July, was 0.4%. That’s an annualized rate. Prices have been decelerating for four months.

All the while the BoJ has deployed the full armament of stimulus: negative interest rates, control of bond yields and asset purchases to the point where its balance sheet tops Japan’s entire Gross Domestic Product.

In 2018 BoJ Governor Haruhiko Kuroda said there was a ‘high chance’ that inflation could hit the target this year.

In fact there’s no chance.

Officially of course all is well. That 2% inflation target stays and the BoJ insists that is has the tools to hit it.

The reality looks rather different. The target is getting further away, with reports occasionally filtering out of increasing disquiet in banking and academic at the side effects of even trying to hit it.

The US Dollar now looks set to break below an uptrend which has been clear on its monthly chart since May 2016. A sustained bout of Yen strength would see Japanese inflation head even lower, that inflation target look ever-more out of reach. 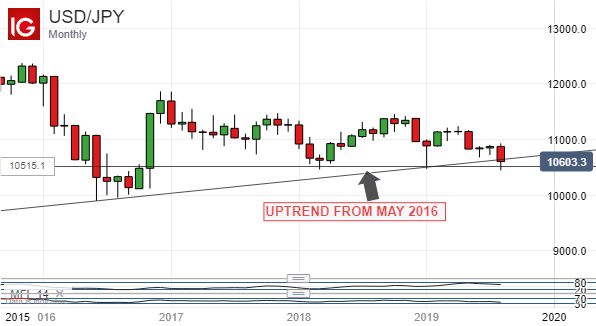 The Japanese Ministry of Finance said this week that it was watching Yen moves ‘with urgency.’

You bet it is.