A Sudden Fascination with Bonds Is a Sign of Trouble Brewing

I would posit that when bonds are the principal headline across the financial media something is likely amiss in the market. When the asset class is front and center and yields globally are at an all-time-low, conditions are definitely troubled. This past session, despite a range of notable developments in the fundamental spectrum, the focus was squarely on the health of the debt trading market - particularly of the government variety. The most frequent refrain was around the inversion of the 10-year and 2-year segment of the US Treasury curve. For many, this was inevitable given the flip on so many other combination, but this particular comparison is actually a recognizable market favorite - for those that follow such things. Thus far, fear has dined voraciously on the less common 10-year and 3-month yield spread flip a few months ago. This afforded much greater attention to this instance and it also readied the fear-based response to its eventuality. 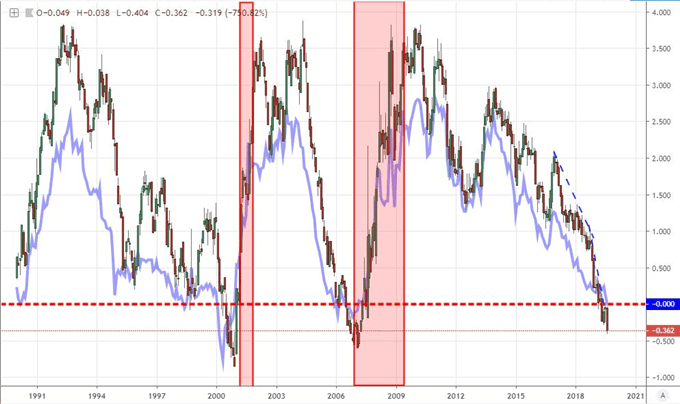 Consider bonds as an asset class. As common as it is in portfolios and in text books, it is not the source of natural interest for the average 'trader' - and even 'investor' - across the globe. Shares and other volatility-centric assets draw the bulk of interest for accessibility and the favorable correlation they maintain to something as rudimentary as economic health. Therefore, financial media which is principally interested in clicks and viewer attention for ad revenue will rarely make the asset class its center of attention unless markets are completely dead or there is some significant economic or financial upheaval. We are currently facing the latter predicament. It is true that US Treasury yields are being distorted by the extreme monetary policies of the Fed (and global yields due to other central banks), but there is further a cyclical element here tied to the more 'mundane' reality of economic struggle and investor recognition of the collapse in returns. In other words, market participants see a rising risk of recession and/or a bear market.

From a fundamental perspective, one of the most powerful forces in translating developments on the docket or in data into price action is the inherent bias of the speculative masses. This is what we often reference when we say the market is of a 'risk on' or 'risk off' (risk appetite or aversion) demeanor. The principal setting over the past 10 years is a favor for the bullish which has leveraged favorable turns in signs of health and generally downplayed the negative. That has played a significant role in a decade of expansion - and it certainly a bigger factor in the particular premium afforded to benchmarks like the Dow and S&P 500 pushing record highs. Yet, as strong as complacency is, it does not hold a bearing forever. Eventually the foundation to that perspective or the practicality of the situation falls out. Could we be reaching that breaking point?

There was little missing the impact that the most recent bout of fear was spurring in the capital markets. The tumble began in the European trading hours, but held significant momentum through the active US session. That would naturally put the focus on the US equity market as a baseline for the fear playing out. There was some disparity between the two most popular US indices - Dow and S&P 500 - through the Wednesday close that bulls and bears can chose to swing their commitment. The blue-chip index that carries more weight particularly in international markets, suffered its biggest single-day loss of 2019 (back to December 4th technically) and broke a bullish trendline support that originated at the very beginning of the year as well. We are now facing early month lows and the 38.2 percent Fib of the 2019 range stands a further down at 25,220. Bulls will find more appeal in the S&P 500 which hasn't cleared its own channel floor for the year. I wouldn't put too much emphasis on a steady-state of complacency however. 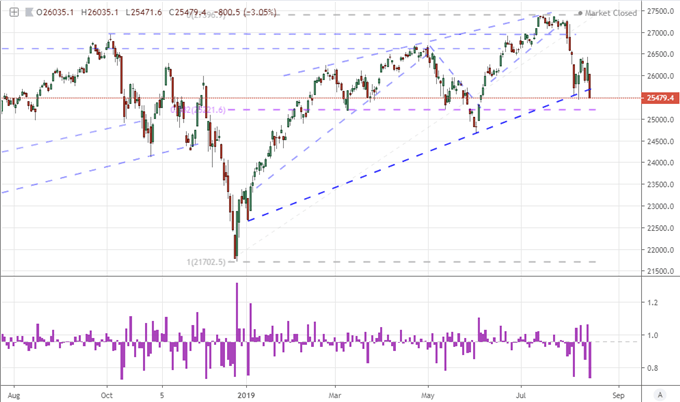 While the performance of the speculative favorite US stock indices is a good weathervane for the most aggressive speculative interests, a true reading on market interest for the purposes of trend is best reflected in the correlated performance of risk-leaning assets. It is that perspective that should cause a little more discomfort with this past session's proceedings. The VEU global markets ex-US index took a hard turn lower as did the EEM emerging market ETF with EM currencies, Yen-based carry trades, junk assets and other distinctly oriented risk assets. A strong correlation among these otherwise disparate markets is a strong sign of a common fundamental trend. An intensity and/or momentum more frequently designates a serious fundamental theme that can earnestly carry trends. We have correlation and intensity, but consistency is still an unknown. 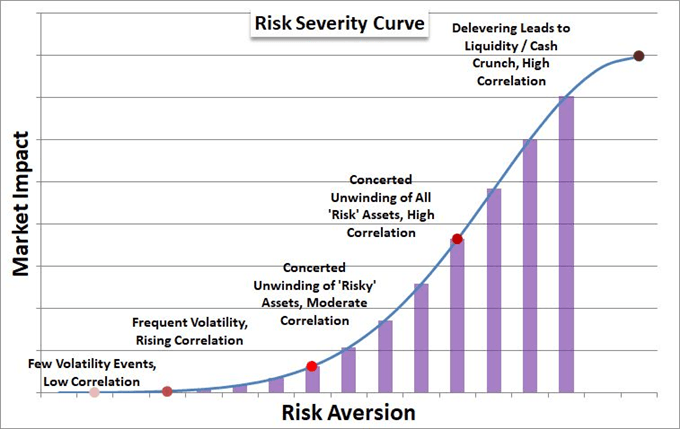 Trade Wars and Monetary Policy in the Context of GDP

What makes this past session's market concern even more remarkable is that it follows a stiff bounce leveraged by a very tangible event: the backtrack by the White House to slap a 10 percent tariff on the rest of the $300 billion in Chinese imports not yet taxed as of September 1st. With some of the Commerce Department's guidance in hand, some groups went to work to estimate what the tab would be at the start of next month and how much larger the bill will be on December 15th. According to Peterson Institute's assessment, approximately $112 billion in goods will be on the list as of September 1st while an additional $160 billion in goods will come under the bill as of mid-December. Clearly the White House expected a symbolic gesture from China in return as they stated that there was no concession from China to its lenient shift. 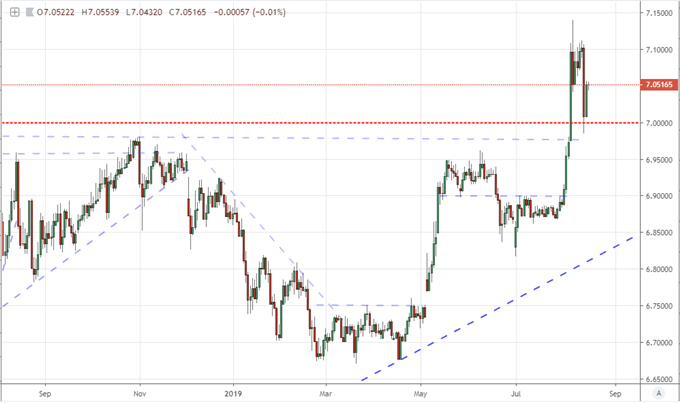 Keeping the global implications in mind, House Leader Nancy Pelosi seemed to shoot down the Executive branch's enthusiastic support of the UK's Brexit push saying that the US would not deal if the Good Friday agreement was broken. Also, large US tech companies like Google, Amazon and Facebook are testifying in Washington against France's digital tax, but they should be careful about getting the administration involved as the results could be far more significant than the targeted tax they face.

Monetary is relatively out of fashion at the moment, but don't lose sight of this critical feature. President Trump was on the wires again leveraging aggressive claims that China wasn't a problem to US growth but US central bank certainly was. Again questioning the Chairman's competency, Trump would also retweet a targeted critique of Powell's remarks that July's cut was a 'mid-cycle move' and that they are 'data dependent'. The President cares little about the central bank's credibility or the risk that they have little-to-no recourse to future crises, but he is acutely aware of the re-election pressures amid an economic downturn. 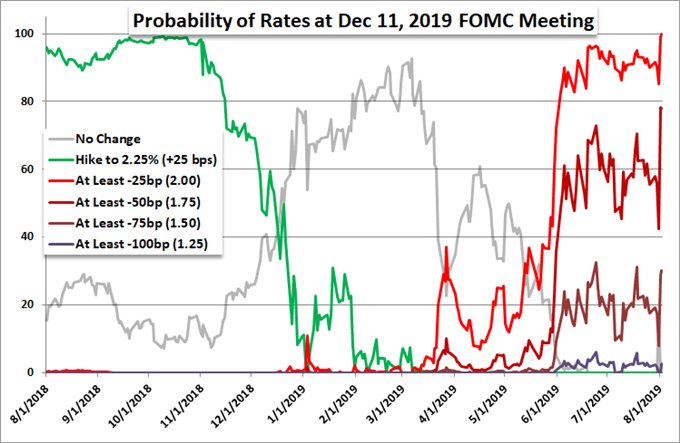 Arranging the Majors for Growth Concern...Gold Maintains Its Standing

If we were to re-evaluate the appeal of the major currencies according to their economic standing, the picture could change significantly from the relative monetary policy standings or trade war exposure. In particular, the US would find itself more immediately at a tangible disadvantage. It isn't necessarily that the US economy is flashing more severe signals, but there is far more attention being paid to its local signals. That could further stretch the Dollar's cut off where it could finally return to its role as a safe haven. As for the Euro, data that showed the German economy contract this past session poses a more significant headwind to a status as a benchmark alternative to a more actively troubled Dollar, Pound and Yen. 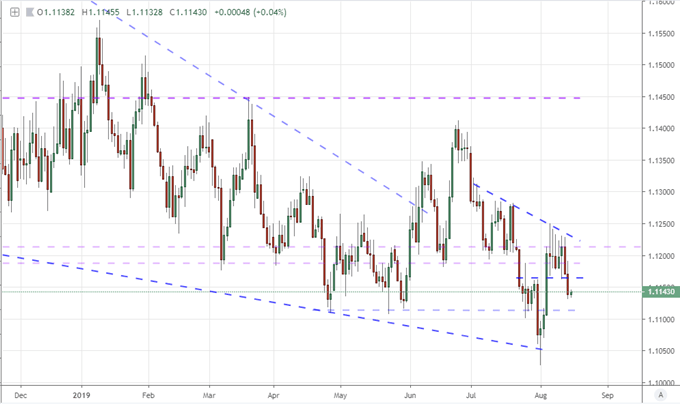 The Pound continues to find its center in Brexit fears, which are well-equipped with an economic pain component. That said, it is difficult to keep building on the pressure of a bearish discount on the already-incredible tumble thus far and the proximity of a three-decade low for GBPUSD. One market benchmark that does not see its position fundamentally change with theme is gold. A risk aversion prompted by economic activity carries much the same consequence as one charged by trade wars and monetary policy. It is still broad de-leveraging of capital market assets with virtually little yield while the pool of havens dwindles amid unorthodox policy. Keep an eye on this precious metal as a barometer for the underlying current. We discuss all of this and more in today's Trading Video. 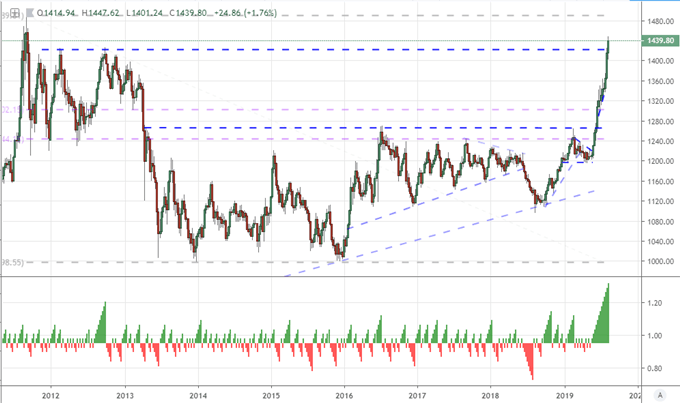