The Japanese Yen tends to play the role of haven in international currency markets, sought after when investors are worried about global growth but not much wanted when risk appetite runs high.

The reasons for this are clear enough. The Japanese authorities have for many years been attempting to stoke pricing power with ultra-accommodative monetary policy. This has left Japanese short interest rates at -0.1% and Yen returns extremely paltry when compared to, say, the US Dollar’s. US base rates may not be especially high by historical standards but, at 2.25-2-5%, they dwarf Japan’s.

The only reason to repatriate your Yen, then, is when you are so worried about world growth prospects that you’ll take even rock-bottom Japanese returns as the price of safety.

The problem is, though, that the Japanese authorities have not managed to stoke that pricing power. Today, after decades of loose monetary policy the Japanese annualized consumer price inflation rate stands at 0.2%. Yes, you read it correctly. That is the annualized rate.

It seems obvious that the Bank of Japan’s ‘sustained 2%’ inflation target is now unreachable. Inflation has been nowhere near that level since the end of 2014.

Officially the BoJ line is that powerful monetary easing will see that inflation target hit, but it’s hard to find many in the markets who believe that that day is coming anytime soon. And it’s very likely that doubts are growing in official circles too.

Nikkei reported last September that doubts were growing at the central bank about the target, with focus turning instead to mitigating the side effects of stimulus already applied. In November the Paris-based Organization for Economic Cooperation and Development (OECD) suggested that an inflation range might now be more appropriate for Japan than a simple target.

Inflation Target Could Need To Be Reviewed

The Bank of Japan’s Governor Haruhiko Kuroda said in December that attempts to hit the target would be taken ‘step by step.’ This looks innocent enough on casual viewing, but it replaced earlier pledges to get there ‘as soon as possible’ and was a clear watering down of ambition.

Now comes a Bloomberg report suggesting that some at the BoJ think the target will remain elusive through this year, next year and into 2021.

It’s important to note that all of the above are merely straws in the wind. As far as anyone knows these are unrelated reports and there may be no deeper meaning behind any of them.

But the inflation target is in focus again. If these stories keep coming, speculation that it could be altered will only increase. Should they gain traction then they may well provide the Yen with the sort of domestic economic data support it now lacks, given the current clear disconnect between economic performance and monetary policy.

It could well be worth watching out for headlines on this topic as we move into 2019’s second quarter. 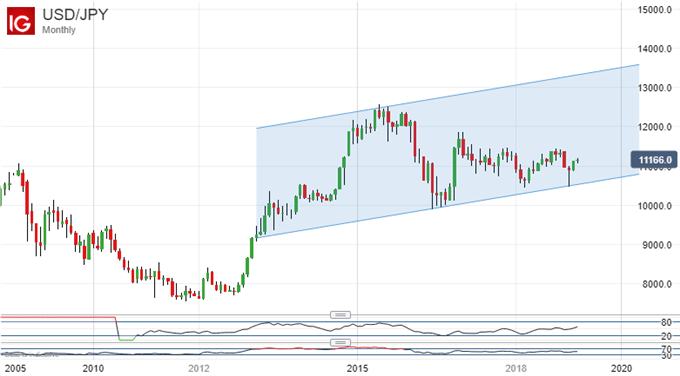