What’s the secret ingredient? Is there one? Check out the DailyFX deep, deep dive into the Traits of Successful Traders

The Japanese Yen was very much in focus through Friday’s Asian session, during which it rose against the US Dollar thanks to unusually explicit comments about the likely end of monetary easing from Bank of Japan Governor Haruhiko Kuroda, newly returned to office for an unprecedented second straight term.

While reiterating that the BoJ remains fully committed to current, ultra-loose monetary settings until consumer prices sustainably hit a 2% annualized target they are presently nowhere near, Kuroda did make some unusual additional points.

He said that neither monetary easing nor tightening ever lasts forever and that, if inflation continues to rise, it should hit the target around fiscal 2019, allowing the BoJ to consider a policy exit. The Japanese Yen market has been on tenterhooks for any sign that such an exit is to be considered and, while Kuroda was only stating the logically obvious –when the target is hit stimulus can be withdrawn- the currency rose sharply on his words. 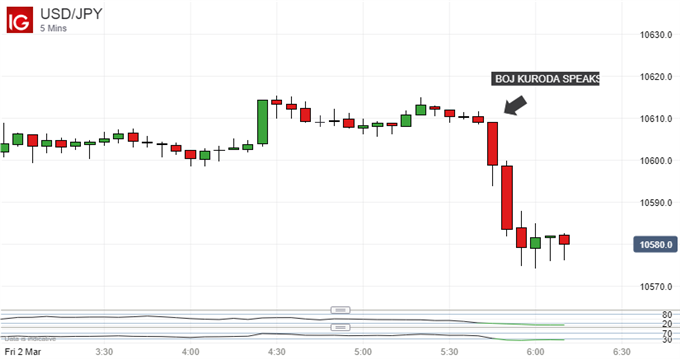 Kuroda also said that there was no chance of policy being withdrawn soon, however, as it seemed to be working. Japanese inflation has indeed risen. January’s 1.4% Consumer Price Index gain was the strongest since March, 2015. Friday also bought news that Japanese unemployment levels hit 25-year lows in January.

Moving across to equity, Asian stocks were broadly lower Friday after US President Donald Trump announced new tariffs on incoming steel and aluminum. Asia is of course replete with exporters of both. The Nikkei 225 shed 2.50%, the ASX 200 lost 0.7% and all other major regional bourses were in the red as their closes loomed for the week.

Gold prices inched higher through the session while crude oil prices put in a more mixed and subdued showing. Both international benchmark Brent and US crude were above their recent, two-week lows however.

The rest of the session will bring Italian growth data, the UK construction-sector Purchasing Managers Index and the University of Michigan’s time-honored look at US consumer sentiment.