Stocks were broadly higher on Tuesday afternoon in Asia with investors clearly encouraged by the more hopeful tone emanating from Washington and Beijing.

In truth the situation between the two remains somewhat opaque. Donald Trump said on Monday that China had indicated a willingness to return to the conference table. A Chinese spokesman seems to have cast doubt on whether any contact took place but the country has hoped that ‘calm’ negotiations can still take place.

Still, a lack of overt hostility between the two is clearly enough for stock investors at the moment. Big-name financial and industrial bellwethers such as Japan’s Softbank and South Korea’s SK Hynix both rose sharply. The Nikkei 225 was up 1.2% as afternoon trade kicked off. The Kospi added 0.7% while the Shanghai Composite was 1.7% higher. Hong Kong’s Hang Seng was the notable laggard, just in the green with a 0.1% rise. Political tensions remain high in the restive territory with capital flight a rising worry.

In Sydney the ASX 200 was up by 0.5%. The Big Four banks bounced from their Monday falls but infection-control specialist Nanosonics and conglomerate Wesfarmers did most of the heavy lifting. Nanosonics surged nearly 30% on the publication of blockbuster results.

Oil prices rose too, with that market also calming after falls earlier in the week.

Asia Pacific foreign exchange traders appeared more circumspect than their equity-market equivalents about US/China relations. The counter-cyclical Japanese Yen continued to gain against an otherwise torpid US Dollar through the session.

Japanese finance minister Taro Aso said on Tuesday that he was monitoring the currency "with a sense of urgency." More Yen gains will be a problem for Japanese monetary policy which is already dealing with extremely low inflation even after many years of extraordinary stimulus. A stronger Yen will only depress imported inflation further.

Still, USD/JPY remains defensive and, on its monthly chart, looks in some danger of snapping an uptrend which has persisted since May 2016. 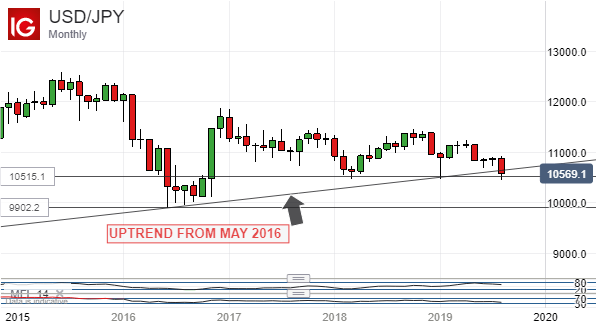 The market is also looking perhaps with a measure of trepidation to US consumer confidence numbers for August which are due after Asian markets close.