Spot USDJPY has been quite volatile over the last few trading sessions as the sentiment-geared currency pair whipsaws in response to the latest US-China trade war headlines. After getting crushed well below the 105.00 handle to kick off the week, spot USDJPY has since recovered owing to reports that China wishes to restart trade talks with the US following last week’s trade war escalation. The upbeat headlines – although heard by markets several times before – appear to have so far rekindled risk appetite, but that could quickly change if Tuesday’s US Consumer Confidence report spooks traders. 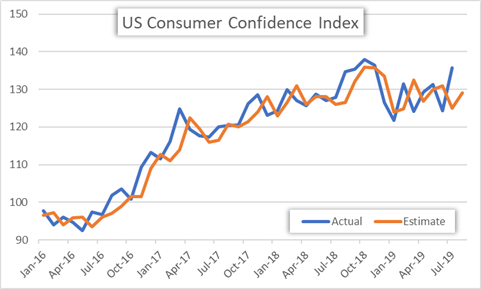 US Consumer confidence has gyrated since peaking last October when equities initially began to succumb to slowing global GDP growth driven largely by the US-China trade war. Although July’s Consumer Confidence data came in better than expected at 135.7, the timing of the report likely received a boost hopes for the Federal Reserve (Fed) to cut rates in addition to the Trump-Xi G20 Summit meeting and apparent de-escalation in Sino-American trade tensions at the time. 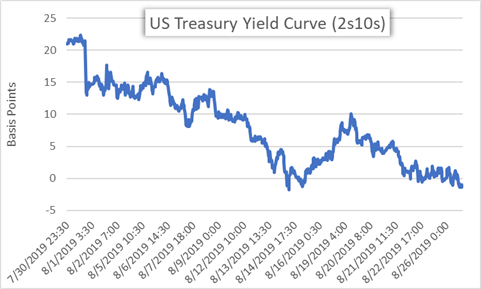 Since then, traders have been taken aback by another flareup in US-China trade war uncertainty following retaliatory tariff threats from both nations amid flashing red recession signals like the US Treasury yield curve inverting along the 2-year and 10-year maturities. In light of this, Tuesday’s release of US Consumer Confidence data for August is expected to drop to a reading of 129.0 according to Bloomberg’s median survey estimate. Also noteworthy is the latest consumer sentiment reading, a similar survey of consumers, which could foreshadow a big miss when the August US Consumer Confidence data crosses the wires. 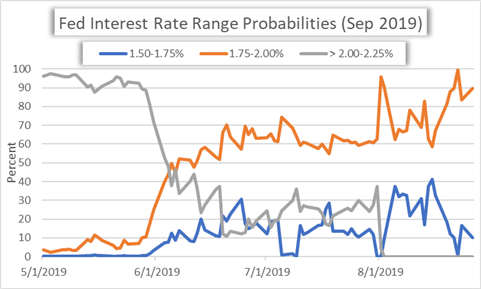 A datapoint that comes in materially below consensus has potential to damage risk appetite as well as boost Fed rate cut bets with both market reactions standing to send spot USDJPY swooning. On the contrary, another better-than-expected reading could encourage the recovery in sentiment seen so far this week but is not likely to jolt rate traders enough to question the probability of another 25bps interest rate cut next month. While consumer confidence may not be a primary economic indicator obsessed over by the Federal Reserve, the gauge likely factors into the central bank’s outlook and a prolonged deterioration in the headline figure may encourage accommodative monetary policy action. 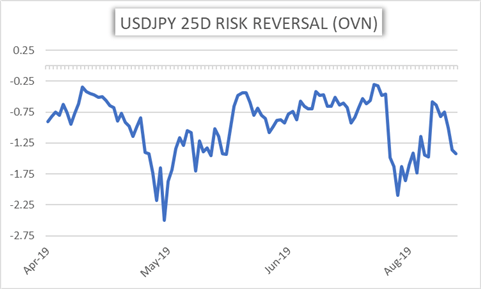 Ahead of Tuesday’s high-impact economic data release, the latest USDJPY risk reversal reading for the overnight forex options contract of -1.425 points to continued downside bias by traders as the demand for puts outweighs that of calls. A risk reversal reading below zero indicates that put option premium is greater than the premium for call options. 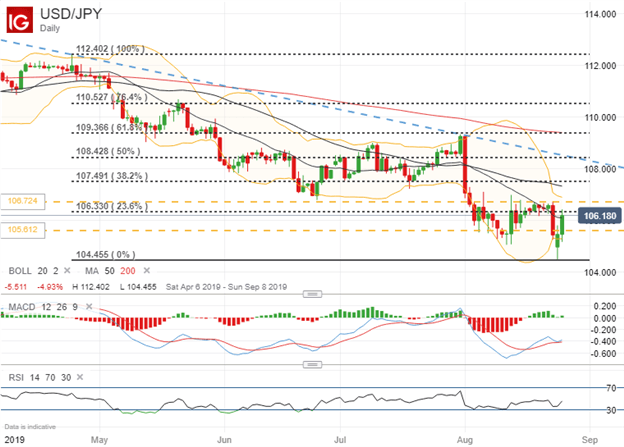 Also, USDJPY overnight implied volatility of 10.01%, which is modestly higher than its 12-month average of 6.04%, reveals the forex market’s heavy weight being placed on the August Consumer Confidence data print tomorrow. That said, spot USDJPY is estimated to fluctuate between 105.61-106.72 with a 68% statistical probability calculated using the currency pair’s overnight implied volatility reading. Spot USDJPY upside could be limited by technical resistance posed by the 20-day simple moving average and 23.6% Fibonacci retracement level of the steep slide lower since late April. 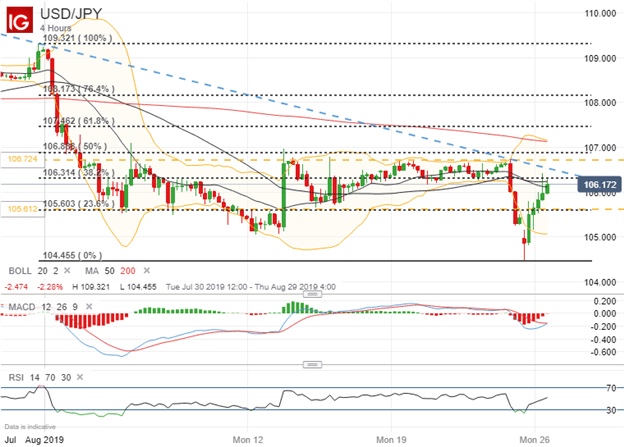 Spot USDJPY resistance becomes more evident when zooming in on a closer time frame. Technical confluence around the 106.30 price level is also highlighted by the 38.2% Fib of spot USDJPY’s trading range since July 31. Also, downtrend resistance could keep potential upside in spot USDJPY at bay going forward. Consequently, spot USDJPY could be at risk of drifting back lower with a disappointing Consumer Confidence report potentially serving as a catalyst that sparks a selloff in the US Dollar.