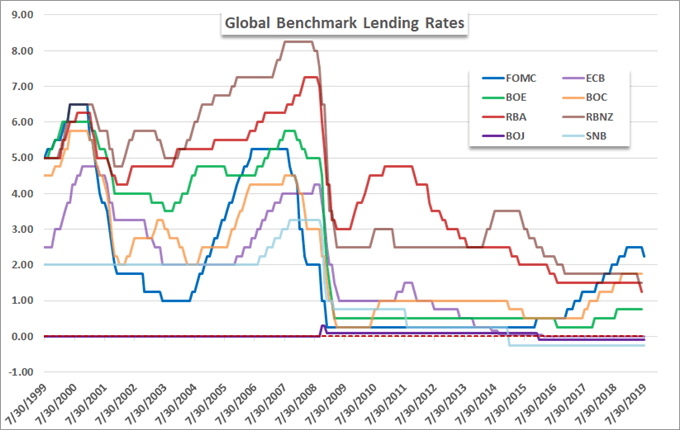 The Fed Cuts Rates As Expected, Its Message Leaves the Market Unsteady – Not as Expected

The Federal Reserve’s monetary policy update this past session was a rollercoaster for the markets. A pivotal event in the evolution of this major central bank’s influence over the global financial markets, investors were watching closely to see if the US authority would provide another speculative foothold to the collective easing of policy worldwide. The bank would both meet expectations and disappoint in the same effort. The most tangible development from conclusion of the two-day meeting was a 25 basis point (bp) rate cut. That would lower the benchmark range to 2.00 – 2.25 percent as the first move to ease since the end of 2008 when rates essentially bottomed out at zero at the height of the Great Financial Crisis. It would also cap the second longest period between rate cuts in the modern age and set at least an interim peak far lower than what we had seen in previous decades.

The rate cut itself was expected. As seen in Fed Fund futures and overnight swaps – not to mention the lift from US equities – a cut was fully priced in. Therefore, this measure alone not be the determining factor of the market’s evaluation of impact. In fact, there was a non-inconsequential probability of a 50 bp cut at this meeting (approximately 20 percent) that perhaps left the capital markets a little disappointed. That offered the Dollar a little lift and speculative appetite something of a set back. In the statement that accompanied the decision, the Fed remained optimistic on growth and employment trends while offering a relatively modest evaluation of the shortfall in inflation – certainly not enough to suggest an aggressive run of rate cuts was at hand. That said, the language would afford for interpretation that future rate cuts were possible should conditions warrant. So, not exactly a one-and-down. 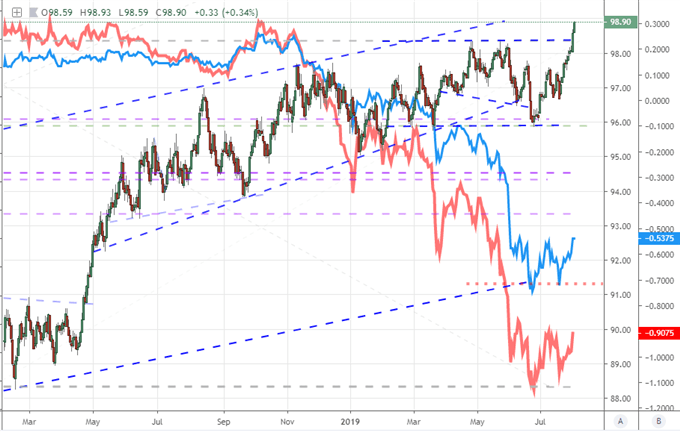 The real fireworks came with Chairman Jerome Powell’s press conference half an hour after the rate decision. Perhaps realizing that at least half the market would be disappointed regardless of the outcome, the central banker seemed on the defensive and struggled to walk the fine line they aim for in order to achieve a ‘non-event’ in the market’s eyes. He would fall well short of earning the market’s confidence that growth is doing well and that the cut was justified. From there, he remarked that this was more like a ‘mid-cycle’ adjustment which was seemed much more like a one-and-done to traders. Through subsequent questions he tried to clarify that he simply meant to suggest the move wasn’t necessarily the start of a long rate cut cycle. His further rumination that ‘some previous mid-cycle adjustments have seen next moves turn out to be rate hikes’ only assured market confusion. And, in confusion, traders become acutely aware of how vested they are in risk – particularly US-based exposure.

The Dollar Take, The Dow Take and Gold Take on the Fed’s Action

From the Dollar, there was as much back and forth as anything else with any sensitivity to the event; but it never slipped into the ‘red’ of the pre-release levels. Ultimately, if the Dollar was still climbing heading into this event with debate of a 50 bp cut in the backdrop and prevailing speculation between 50 and 75 bps worth of easing in total through year’s end, a higher probability of a single insurance cut certainly wouldn’t put it off a recovery effort. While the Dollar is not clear of resistance across the board – far from it – moves like USDJPY’s rally suggests the Greenback response is perhaps more motivated than risk aversion as of yet. The most impressive move, however, would have to go to the EURUSD which cleared 1.1100 to trade at multi-year lows. 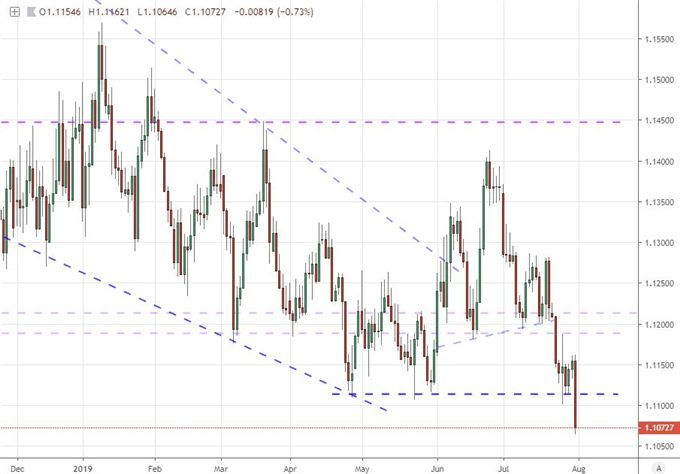 The Dow and other key US indices represent risk trends with an unmistakable advantage afforded by relatively stalwart growth and the belief that the policy authority behind the market could offer additional infusions of lift should conditions start to sputter. The suggestion that they are not as willing to issue preemptive support as market participants had hoped clearly took its toll. The Dow dropped back below 27,000 while the S&P 500 held up at 2,960 but neither seemed willing to yet commit to a full deleveraging. Emerging markets and global capital markets seemed to be equally disturbed by the event, but it is the US markets that are riding on the most over-exaggerated notion of premium and therefore have the most to lose. I will be watching the ratio between the likes of the S&P 500 and the VEU closely moving forward. 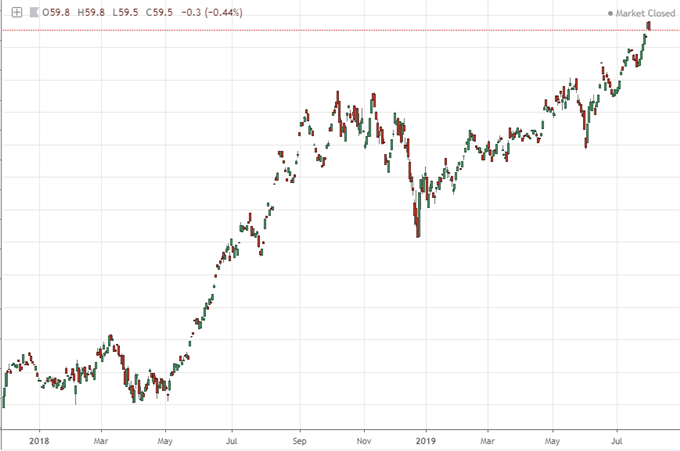 Another measure that has been carefully calibrated towards US monetary policy these past months is gold. The precious metal has climbed alongside the speculation of impending Fed cuts. The fact that the central bank doesn’t seem as pressed to unwind as the financial system had anticipated would reasonably remove some of the winds from commodity’s sails. That said, a slower pace of accommodative shift doesn’t diminish the ultimate appeal of the market itself. Gold is a haven against stability risks that is exacerbated by the value issues with typical fiat havens which deflate in aggressive easing. The Fed has still capped his tightening cycle for the time being. Furthermore, the ECB is still on pace to reactive a dovish effort and the BOJ never stopped. Consider gold priced in a range of the major currencies. 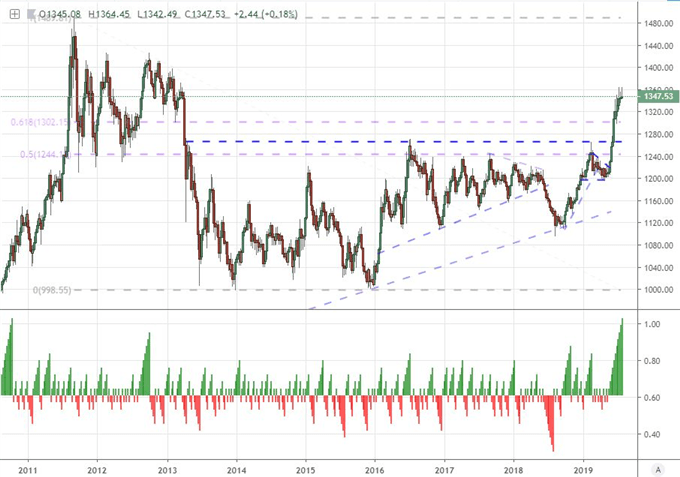 While the Fed was a clear distraction for the markets this week – and will continue to be a matter the rank will have to evaluate for the context of their exposure for weeks to come – there are other themes for which we must account. Trade wars were put on pause as both Beijing and the White House said talks will resume out in September – a move that seems to echo the suggestion that China is dragging its feet in an attempt to wait out the administration’s tenure.

Economic health is another systemic matter that we would tap into this past session. The Chinese PMIs reflected manufacturing still in contractionary territory, the Chicago-area manufacturing report offered up its worst reading since October 2009 and Japan consumer confidence sank deeper into malaise (37.8 when anything below 50 indicates greater pessimism). The Eurozone’s 2Q GDP reading was the most meaningful update however with 0.2 percent expansion that may have met expectations but halved the previous quarter’s expansion. The tepid growth revives the contrast we saw build relative to the US last week which can also remind us that the ECB seems to be on pace to drop back into extreme easing policy while the Fed gently eases into tepid relief. 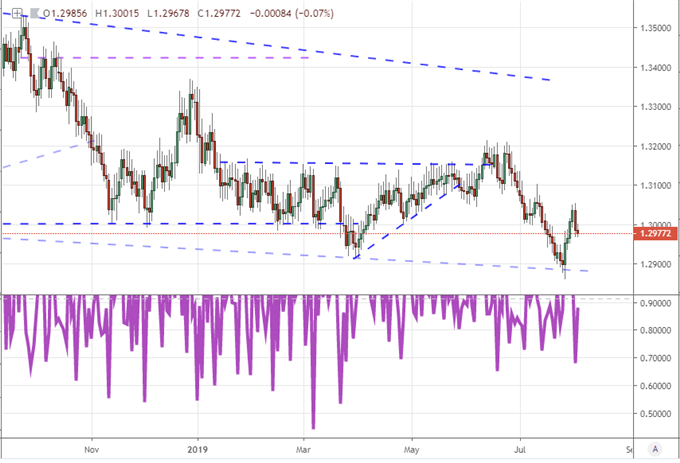 Will the BOE Decision Amplify or Detract from the Sterling’s Brexit Focus?

Looking ahead to Thursday’s session, there is another run of noteworthy event risk on tap, but themes are doing a fair job of distracting from discrete updates. Global manufacturing PMIs are noteworthy, but I will be more concerned with the state of the British Pound. The ‘Sterling’ pulled up from its ‘no deal’ Brexit freefall following new Prime Minister Johnson’s abrupt position on negotiations thanks to something of a capitulatory tone he took likely to stem the bleeding. To build on that Wednesday, reports started to circulate suggesting a two-year seize fire may be reached with the European Union even as they stand separated but without all the details worked out.

Chart of EURGBP and Rate of Change (Daily) 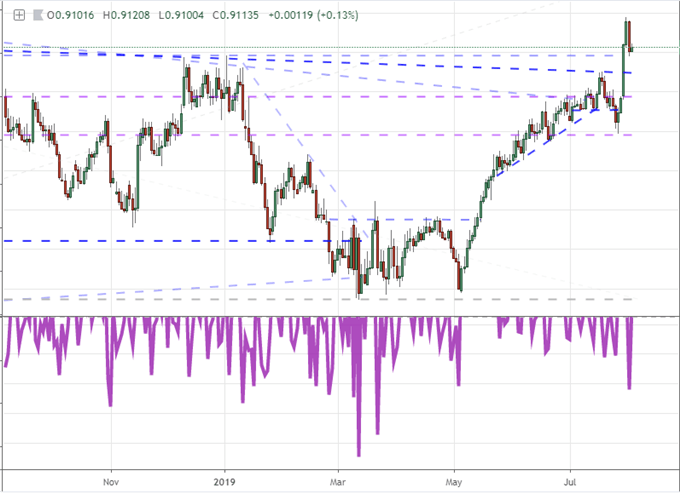 It is this constant state of uncertainty against which the Bank of England rate decision will be judged. This particular gathering will draw an inordinate amount of interest for the Brexit backdrop but also the reticence from the Fed to fully give over to stimulus. Is the BOE more hawkish or dovish than the stature of the Fed? Is it higher or lower on the spectrum relative to the ECB? What insight will they offer as far as the growth implications of Brexit under the new stewardship of Boris Johnson? The answer to these questions can alter course and pace of the Pound.

Following the fireworks from the Fed, the market is likely more sensitive to global monetary policy and key US data. It is therefore wise to keep an eye on the BOE rate decision Thursday and Friday NFPs. Join us we cover these two events live! Sign up on the Webinar Calendar.