Now that the July Fed meeting is in the rearview mirror, traders will likely turn to high-impact economic events and data releases slated for Thursday’s session with the August BOE meeting in addition to manufacturing PMI readings out of China, the US and Canada.

Seeing that spot GBPUSD will be chiefly impacted by the Bank of England’s monetary policy update and Governor Carney’s follow up commentary – particularly in relation to the UK economy and the latest Brexit developments – US Dollar performance over the short term may be better observed via spot AUDUSD and spot USDCAD. 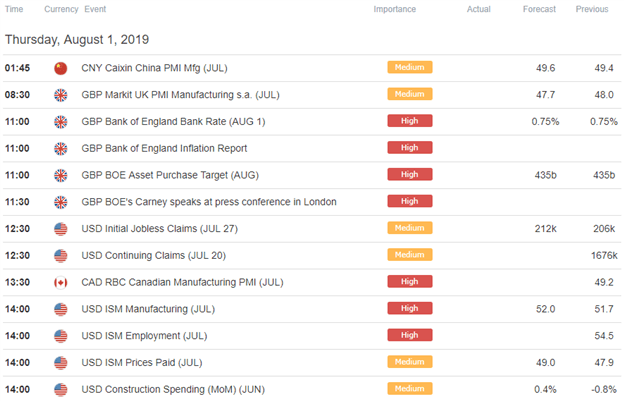 Check out our comprehensive forex economic calendar for a full list of upcoming events and data releases!

Overarchingly, Chair Powell expressed a non-committal stance in regard to future monetary policy decisions with today’s action to lower rates viewed as an ‘insurance move’ to protect against downside risks and keep supporting the economic expansion. Despite the FOMC still seeing a positive baseline outlook, downside risks remain predominantly around slowing global GDP, trade war uncertainty and weakness across the manufacturing industry. 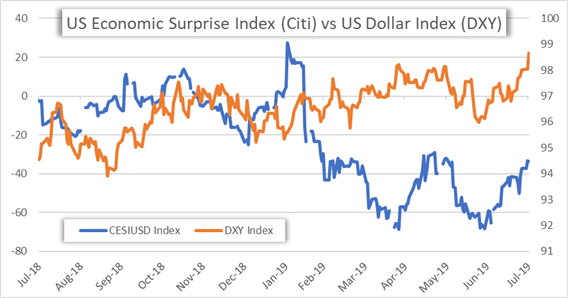 US Fed Chair Powell also stated that the latest FOMC rate cut was a “mid-cycle adjustment” and that Wednesday’s decision to lower interest rates by 25 basis points “differs from the start of a lengthy cutting cycle.” In light of the latest Fed policy decision, it remains paramount to watch incoming economic data closely for potential insight on how the US central bank might respond to economic developments down the road.

As such, Thursday’s release of the Caixin China Manufacturing PMI, RBC Canada Manufacturing PMI and ISM US Manufacturing PMI reports will likely be scrutinized for signs of a rebound or further deterioration across this sector. Yet, it is worth mentioning that the more sanguine tone conveyed by Powell – relative to the increasing dovishness over the last few Fed meetings and other central banks – poses as a bullish prospect for the US Dollar. 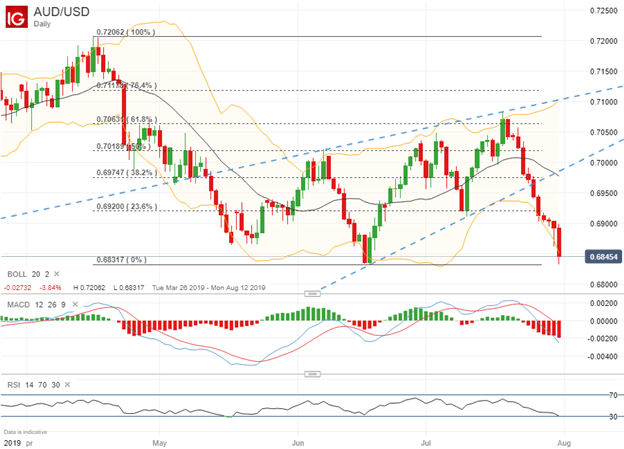 Seeing that China is Australia’s largest trading partner, the Australian Dollar stands to be impacted by the release of the Caixin Chinese manufacturing PMI report. If the data comes in hotter than expected, spot AUDUSD could claw back some of Wednesday’s downside. Conversely, a disappointing report stands to exacerbate the string of weakness recently recorded in spot AUDUSD. 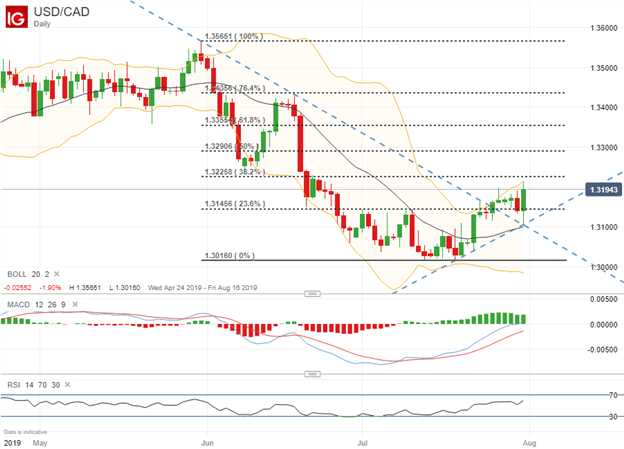 Spot USDCAD should also be kept on the radar with both Canada and the US set to release manufacturing PMI data. Also, considering central bank dynamics between the BOC remaining sidelined and the Fed now on the backburner, spot USDCAD performance may exhibit a cleaner take at where the US Dollar will head from here.